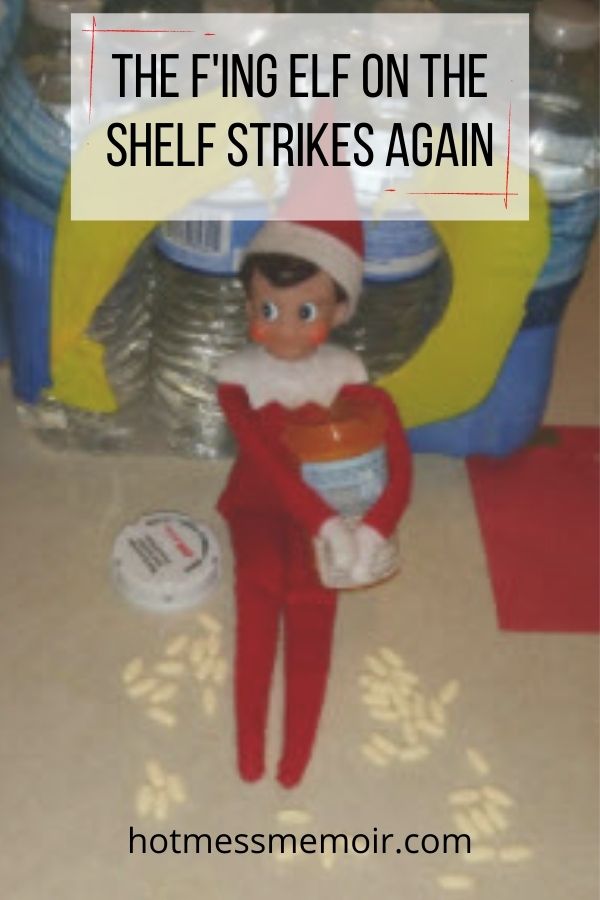 After over a decade of having to move the little fucker that we know as the elf on the shelf, we were FINALLY able to stop moving it, effective last year when my youngest quit believing. Thank the baby Jesus.

Over the years, instead of fellow mothers banning together, refusing to play into the elf culture, they turned on many of us and went all out. Scenes would be created for this ass hole. A scavenger hunt was not uncommon and of course, all of this would HAVE to be posted on Facebook as an “I’m a better mother than you are” declaration.

Because I had had enough of this braggery, I decided to give all of these self-righteous women a run for their money. You want scenes? I’ll give you scenes. The things I created were worthy of an Oscar for best set design.  I hated this 6″, felt-clad, creepy AF, ass hole but if they wanted to play dirty, challenge accepted.

But now there’s a new trend that leaves my neck sore from shaking my head in disgust. Not only are there “scenes” but parents are buying gifts that the elf supposedly brought to them. It doesn’t work that way ladies. The elf is strictly a way to blackmail our children into behaving slightly better for 25 days. He’s a snitch and we need to keep it that way. You’re totally ruining the one, small, bright spot of this ridiculous tradition. If we lose the blackmail aspect of this, we have simply just created yet another task around the holidays for ourselves that literally has no benefit.

Elf on the Shelf- My Body, My Choice

Like birth control, I feel it should be the woman’s choice if she wants to be responsible for moving an elf for 1 month of the year, every single night for at least a decade. You don’t think it’s a big deal but it is when you have your Pinterest obsessed women who do it for the attention on social media as opposed to doing it for the sheer delight of their child(ren). Then those kids brag about it at school, your kid comes home disappointed that his elf didn’t make Christmas inspired sushi rolls like Bradley’s elf. Instead, his elf just moved from one branch of the Christmas tree to another branch that night.

‘Bradley’s mom probably wasn’t hungover at 3 am when she got up to make Christmas sushi rolls,’ is what crosses your mind.

How to Fix the Elf on the Shelf

Before the elf on the shelf becomes even more obnoxious than it already is, let’s just end it. I am pleading with every woman in America tonight to grab their elf on the shelf and throw it into a fire. Just tell your kids that the elf on the shelf got promoted or something to the reindeer engineer job and currently the company isn’t backfilling the position. I promise only mild mental damage will ensue.

P.S. If you want to check out my other hate-filled posts about the elf on the shelf, here they are:

Inappropriate Pics of Elf on the Shelf

Elf on the Shelf Night 1

Elf on the Shelf Night 2

Elf on the Shelf Night 3

Who Hates the Elf on the Shelf? Me too

Elf on the Shelf Part 1

Elf on the Shelf Part 2

Wow, I don’t think I realized how many posts I’ve written on this fucker. Obviously, I have issues with it. Anyway, till next Elf on the Shelf post…..