How We Aren’t Decent Human Beings at a Hotel 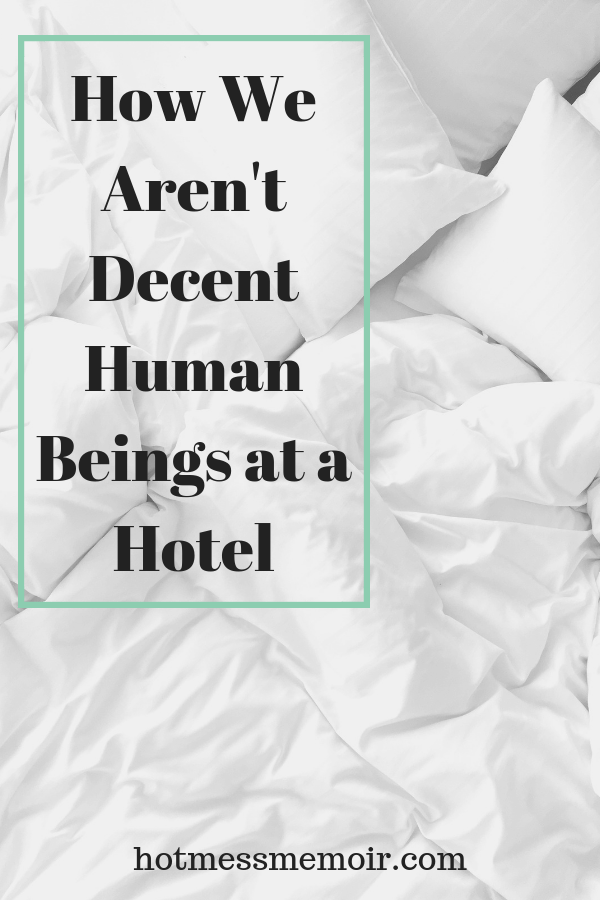 Yesterday I wrote a post called How to Be a Decent Human Being at a Hotel. What I failed to mention is that during out-of-town soccer tournaments, we are really just a big pile of ass holes. Seriously. D’Nial ain’t just a river in Africa and I can tell myself that our behavior isn’t horrible but the truth is, when I approach the hotel desk attendant upon check-in, I want to give her a hug or a gift card. I want to tell her this is just temporary and we’ll vacate the property within 48 hours. I want to assure them that if anything’s damaged, I won’t be paying for it, but I’m sure someone on the team will.

So yeah, here are how we’re big fat ass holes.

The boys LOVE to ding dong ditch. I know, I know….horrible. However, there was this one time when they ding-dong ditched just as I was walking out to catch them. The woman staying in the room they knocked on, also happened to walk out at the same time. She followed after them, screaming in their wake. I too joined in the fun and began to scream after them, vowing they would be grounded for life should they do it again. Obviously they did it again….lots of time.

Every soccer tournament that we travel out-of-town, I bring Cards Against Humanity. These are beautiful, wonderfully articulated cards with such phrases as Stephen Hawking talking dirty or fleshlight. As we reach hour 2, we are laughing ridiculously louder than we should and drinking waaayyyy more than our livers can handle. But we are making memories. 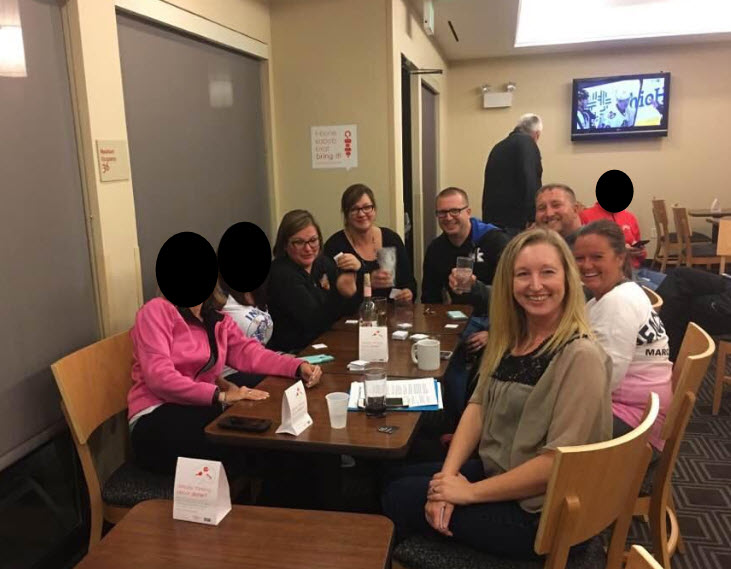 My girls 2 years ago playing our favorite game!

“Yeah, we know breakfast isn’t until 7:30 a.m. but if you could change it to 6:30 a.m., that would be amazing!” We’ve found ourselves asking/telling all hoity-toity (spelling, I know. It’s a term I use vocally but never type out. Perhaps spell check will know).

This has been a request more than once from us. Suddenly, because we have an 8 a.m. game, we expect the hotel to bend over backwards, preparing our breakfast. I wouldn’t be surprised if they spit in it. And you know what? I wouldn’t blame them.

I’ll never forget, nor not regret giving the hotel staff advice. Suddenly, 3 sheets to the wind made me some sort of Yoda or Mr. Miyagi….

“Look, don’t do anyone any favors, ok?” I once told a very pregnant front desk girl. “Get an epidural. Had them with both boys and you know what? They only have a mild twitch. No, I’m just messin’ with you, they’re both in gifted program.”

Yes, I would give helpless 20-somethings advice and God bless them, they just stood there and listened to my drunk ass.

The market place is a relatively new concept with hotels. Instead of only room service with a 20% gratuity, guests have the option to get snacks from this little mini mart. The “mini mart” goes virtually unpoliced after 9 p.m. And after 9 p.m. it goes something like this,

“I’m taking this Pepsi,” my husband yelled over the desk, a virtual drive-by on his way to the elevator. Don’t worry, we told them the next morning.

“Credit this Barefoot Cabernet to room 350,” I barked at the front desk, not realizing I meant to say debit the wine.

Should you check into a hotel and there is a traveling soccer team staying there, vacate the property immediately and find lodging elsewhere. If you don’t, you will be woken up at all hours to what can only be described as buffalo stampedes.

No ass hole, you’re at the Dayton Hampton Inn with 75 other rooms containing kids from the ages of 7-16. Not my problem.

If you’ve been around children at any point in your life, you’ll realize that they like to run, especially in places you tell them not to:

It’s like some primal thing inside them that they can’t resist.

Each time I visit a hotel, I always think that collectively we are going to be better guests but that goes right out the window the moment the boys’ friends arrive as well as our friends. And you know what? I wouldn’t trade it for the world!