How to Be a Decent Human Being at a Hotel 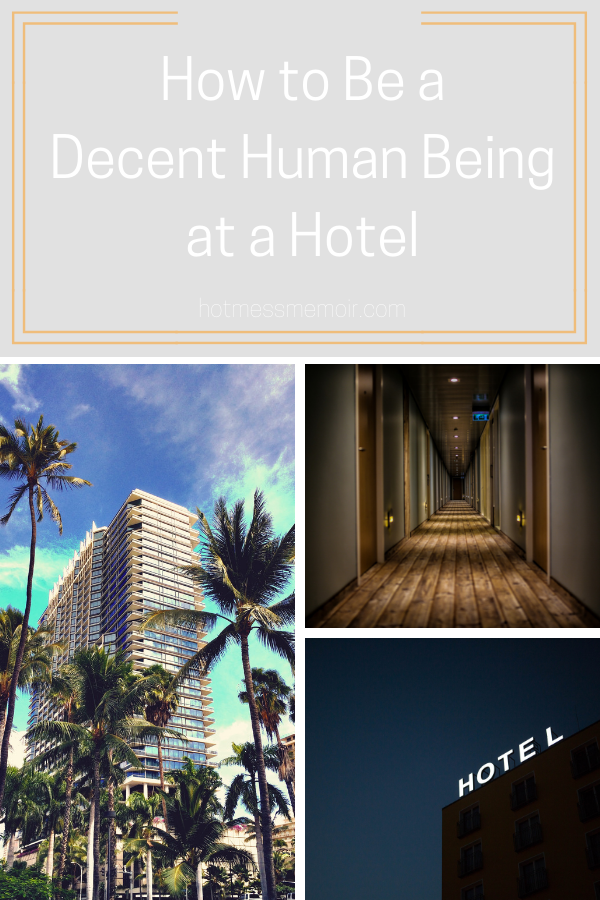 By the way, if you want to check out more of my “How to Be a Decent Human Being” posts, here are a few….

How to Be a Decent Human Being at a Hotel

Let’s start with my biggest pet peeve: PEOPLE WHO WEAR PAJAMAS TO THE HOTEL BREAKFAST. Yes, that gets all caps because it deserves all caps. You aren’t at your fuckin’ house! I’m not asking you to run a brush through your hair or even brush your teeth. Just change out of your pajama set because in no way, shape or form does it constitute as lounge wear.

2 weeks ago, there was an entire family, yes family all in their pajamas. The kids were bare foot while the mom had slippers on. Sure, this was one of those extend-a-stay hotels but you know what? There’s a kitchen in your room for a reason.

While we’re on the topic of breakfast, let’s discuss the breakfast line. This is going to sound impatient but I have zero tolerance for people who don’t need to be slow but are. While approaching the breakfast line, you would think it was an exotic spread from Thailand. They approach scrambled eggs as if they had never seen such wonderment. And what are these delicate breads with a hole in the middle? It’s all so, so decadent……

No it’s not! It’s the God damn Hampton Inn, so grab your bagel and move on.

This is tricky when staying in a room with multiple people. You want to be at home in your room yet then again, you don’t want all 350 square feet to smell like spoiled ass. So here are your options:

A. Bring a little bottle of V.I.P Poo. It’s that spray that locks the nasty smell in the bowl. It works really well.

B. If you’re gonna do #2 and you don’t have the above spray, do a courtesy flush. It will still smell bad but not as bad.

C.* Go use the public restroom in the lobby. I do this sometimes but not when it’s only 1 stall. That totally defeats the purpose.

*This is the ONLY option if you are staying in a room with a co-worker or a new significant other. They are to never know you shit.

Occasionally, I’ll force myself to weed whack, don a bathing suit and make my way to the indoor pool. All the stars have to align and it has to be a harvest moon but occasionally I’ll do it. What I can’t stand when I get down there are the pool brats.

“Hot Mess, what the fucks a pool brat?”

It’s multiple children, 100% unsupervised by their “parents”. They are running around the pool, dangerously close to the edge, and that’s just the toddlers. Then you have the 11-year-old husky kid who’s discovered cannon balls. You know what? No more bitching because I’ve just discovered another “How to Be a Decent Human Being” for the pool.

Just because you don’t have to clean up after yourself doesn’t mean you should trash the room. I’ve walked into co-worker’s rooms before and gasp at the pigsty. What do their apartments look like? No matter if I’m at someone’s home or paying good money for a hotel room, I am of the thought, “leave it better than you found it”. Now obviously that doesn’t mean a hotel room but if you have trash, throw it in the f’ing trash can. If you have used towels, put them in 1 pile and not a path leading to the closet.

Since when did hotel doors have to be as thick or as loud as a bank vault door? When hotel doors slam shut, it’s like the entrance to a maximum security prison. Now usually, my room is beside an Olympic athlete who feels the need to train at 4 a.m. so at 4 I hear,

So yeah, those are a few of my pet peeves. I know I have several more but I don’t like to talk your ears off so perhaps I’ll save them for another post. Unless you are Amish (scratch that, I saw Amish people at a hotel a few months ago) or have lived under a rock, I know you’ve had to stay at a hotel, motel….Holiday Inn. What things piss you off?