One Futon, A Cat Lady and Meth Heads, Part 1 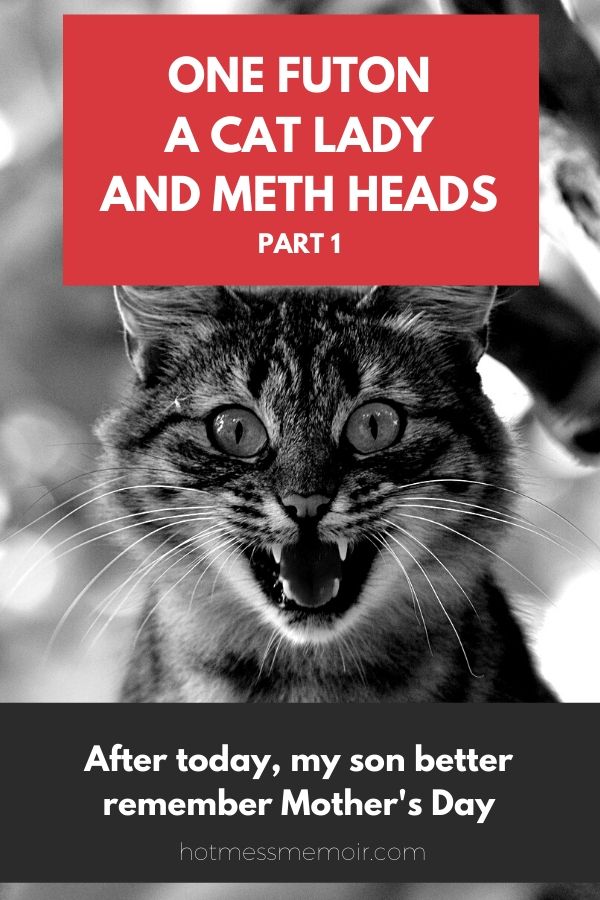 Often times I write after a stressful event. This right now, would be my attempt at shedding just that. Like any good parent, I do everything to ensure my sons aren’t disappointed. Tonight was one of those times.

My 15-year-old son and his girlfriend, cleaned the unfinished side of the basement to the point it’s now an official man cave. There’s a ping pong table, brand new turf flooring, darts, a bar and a brand new futon. Yesterday, I ordered a futon from Walmart because I could pick it up just 5 miles away, and it would be ready by 6 P.M. the same day. It was a Serta, normally $209, on sale for $100.

Obviously the quarantine is getting to me because I failed to read that though the futon would be ready by 6, on a Wednesday, it was a Wednesday….2 weeks from now. I began my search again for a respectable futon, around $100 when I had the bright idea of going on Craig’s List. There, I found an unopened, grey futon for $100, originally from Walmart. It was literally the exact same futon! I crossed my fingers and called, hoping it was still available.

Introduction to a Cat Lady

In the Craig’s List ad, it was mentioned to leave a message as this person did not have a cell phone and cannot text. After beginning my message on the archaic device known as an answering machine, my message was quickly interrupted by a raspy-voiced lady. She said her name was Karen and that she actually had two futons available. She said my purchase would be a donation to the cat rescue she runs….out of her home. She also explained she has one of these futons in her house and that all of her cats just love to lay on it.

Normally, this is when my instincts would kick in, telling me this was a bad idea and to cease all communication. Then I remembered my son’s disappointed face about the delayed futon and told my instincts to shut the hell up.

We agreed that my son and I would drive to her home this evening. It’s important to mention that I’ve lived in central Ohio all my life and have never visited this part of town in which we will call The Valley. I’ve been told The Valley is rough. Like so rough, law enforcement set up monitors to instantly detect the location of gunfire. A quick Google search showed that she lived on what looked to be a safer street and her house wasn’t scary.

At her ranch home, we were greeted by five cat lawn ornaments. Obviously we were in the right place. I looked over to her car and saw a cat air freshener, dangling from the rear-view mirror. Karen opened the door and motioned for us to meet her at the garage.

As she opened her garage, the first thing we saw was an entire pallet of kitty litter. On the left-hand side was junk everywhere. It was dirty and smelly and absolutely no box resembling a futon. When she saw the confusion on my face, she said,

“But this is your garage.”

She slapped her thighs as if that was the funniest thing someone had said to her.

“Oh, no I have another garage. Follow me,” she said as she lifted up another garage door to reveal her patio, yard and a second garage.

This is when my anxiety kicked in. Reluctantly, we followed her through the first garage and onto the concrete patio.  Once on the patio, I looked over to see four cats staring at us. Lazily, they lounged on mats or the bare concrete as if at the pool. Karen had Tiger Kinged an outdoor cage that connected the back door to a portion of the patio. The back door also had a cat door so the cats could move in and out as they wanted.

“Oh wow, cats,” I said as if seeing this breed for the first time in my life.

“Yeah, those are all my cats. The cats that no one wants. That one is blind,” she said, pointing to the grey cat. “The brown cat is just mean and the white one has herpes.”

“Yep herpes. Had it for years,” she repeated.

P looked away, knowing that if he caught my gaze, it would turn into a laugh till you cry situation.

Not yet satisfied, but having to state the obvious, I announced “I didn’t know cats got herpes. I thought that was just a human thing.”

“Nope, totally can,” she said, lifting the third garage door. 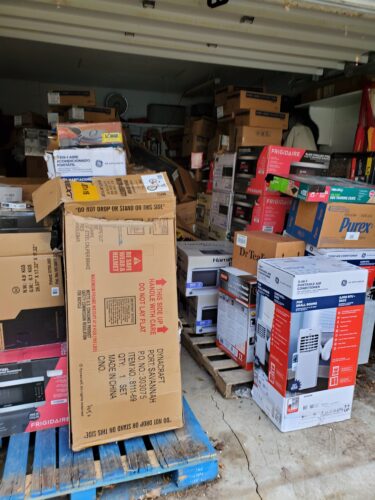 She opened her garage door to a miniature warehouse. All types of shit everywhere, unused and still in the box. There were microwaves, air conditioners and a basketball hoop. A Roomba laid on top of two mountain bikes. This is when it dawned on me,

‘This shit is stolen.’

“So bad news,” Karen announced, “the futons are all the way in the back.”

This is the point my anxiety turned to frustration. Not only did I question this sizeable “donation” that Walmart made to her cats but she knew we were coming yet made no attempt to place the futons in a more accessible location. And there was no way in hell I was going to go into that garage given my snake phobia. I drove P there and forked over $100. If he wanted the futon, he and Karen would have to figure it out.

I’m going to leave the story here as I’m not a fan of long posts. Tomorrow, we’ll go through part 2 of this “journey”. Part 2 was also a shit show and involved getting lost in The Valley, losing my shit and more meth heads then I’ve ever seen in my life.