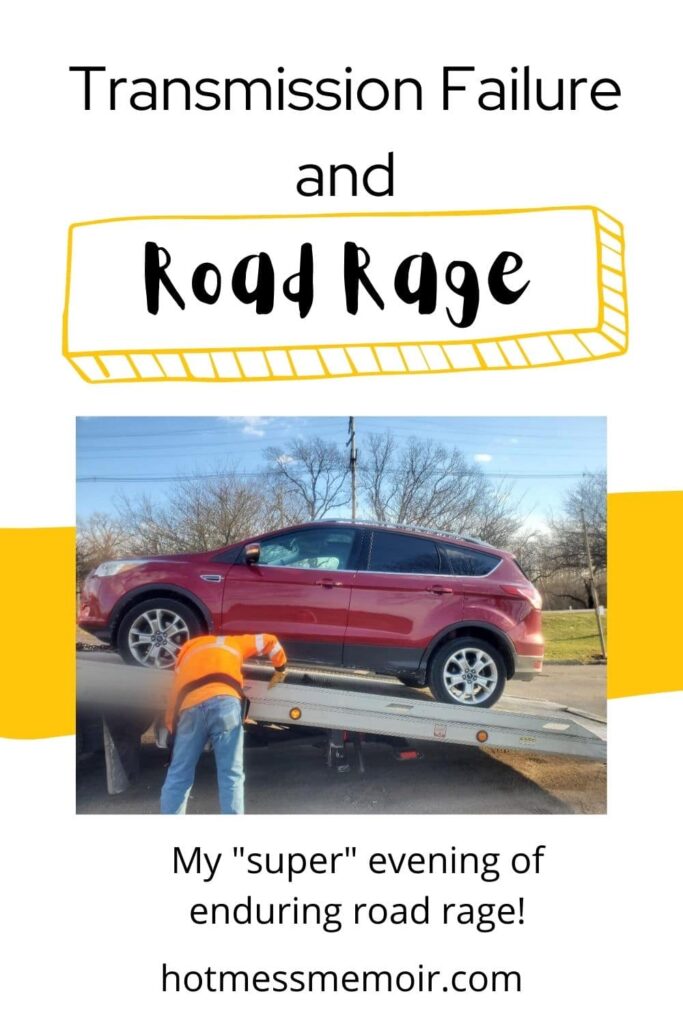 In addition to death and taxes being assured in life, there is actually a third. The third is that when I have an opportunity to have the house to myself, it won’t happen…….ever. You could send my entire family to Jupiter for the day and someway, somehow they would still return home for me. It’s not that I don’t love my family, I love them more than life itself. It’s just that when you commute 62 miles every day and have 2 kids that have a full schedule, you begin to crave alone time and hiding in the bathroom doesn’t count.

Yesterday is an excellent example. The weather was perfect and it was my husband’s turn at soccer carpool. The oldest drives now and would be gone for soccer too. I had visions of pouring a glass of wine and either writing or going down the rabbit hole that is YouTube. I can hear irony now….

“Oh you foolish, foolish woman….bless your heart,” Irony said to himself.

As I was zooming down 70E, just outside of downtown Columbus, my car began to rev up then the following sign came up on the screen:

I pulled over, incredibly frustrated. Shutting the car off, I leaned to my right and pulled the car manual out of the glove compartment. I flipped through with absolutely no luck. As usual, things like like how to open the car door were detailed but nothing in the 350 pages, mentioned what this very alarming warning meant.

Deciding I didn’t want to meet my maker on the side of 70, I started my car again and decided to take the next exit. As I veered onto the off-ramp, I could no longer accelerate and just coasted. Fortunately, there was a parking lot of a city park just off the exit. I literally just made it. Unfortunately, it happened to be in the most dangerous part of Columbus, The Valley.

There have maybe been 4 times in my life I’ve been genuinely scared of my surroundings. The Valley is the 5th place. It’s the type of place that has installed gunfire notification systems and the local news has at least one story of violence a week happening in the valley. Poverty and drugs can be witnessed simply by driving through the streets that make up the Valley. It’s also the place I took my son a few years ago for a futon advertised on Craig’s List. Buying something off of Craig’s List was obviously my first mistake.

The Wait for a Tow Truck

As I sat in an almost empty parking lot, the occasional piece of shit car would roll in, park for 5-10 minutes and leave. I didn’t want to know what or why this was happening. As I looked in my rear view mirror, a cop cruiser was slowly driving into the park. I thought about flagging them down to ask them to wait with me but even my inner white girl was thinking that was too much.

As I watched the cruiser grow smaller and small in my mirror, a new sound caught my attention. I redirected my focus from my rear view mirror to the scene in front of me as a cop car drove like a bat out of hell, passing the parking lot. The blaring of a second cruiser could be heard not far behind. The sirens were entwined with the chopping of a helicopter. I looked up through the moon roof to see a low flying helicopter circling an area, an area that included where I was.

‘I’m flagging that cop down,’ I told myself. I wasn’t going to be this week’s local news story, but I didn’t have to. Just then, I saw the tow truck turning onto the street.

A lanky, tall man hopped out. He was probably 60 with dishwater blonde hair, sprinkled with tuffs of grey. He had a baseball cap on but I knew the color of his hair from his goatee. I also knew he was a pack a day smoker from the deep lines on his cheeks.

“Thank you so much,” I said to him as if he was doing this out of the kindness of his heart. He just stared at me, highly annoyed.

“You gotta a ride or you comin’ with me?” He asked. Oh my God! Was I supposed to have secured a ride? I just instantly thought I would ride along with him. After all, I had him taking my car to a service shop that was within walking distance of my home. The thought of being left outside in the Valley made me instantly loose my appetite.

“I’m riding with you,” I said, praying he wouldn’t protest. You could tell he was pretty much disgusted with the prospect but bit his tongue and proceeded to hook my car up.

Once my car was hooked up, I opened the passenger side to a truck cab that could have been featured on Hoarders, Vehicle Edition. Trash, clothing and cigarettes were just a few things scattered all over. I was honestly surprised there was space for me.

Clearly we were not on a first name or really any name basis so we will call him Gary. As we drove on to I-70, I remembered we were still in rush hour traffic and downtown. Gary on the other hand drove as if he was the only one on the road and the sea of cars would magically part for him.

As we accelerated to 65, Gary’s true passion and God given talent of road rage unleashed itself.

“I can’t get over ass hole,” he screamed at a car, desperately trying to get over, “so you’re just gonna have to deal with it!”

I attempted to find comfort in the fact that Gary does this every day and is still alive. After getting out of the worst part of the congestion, I breathed a sigh of relief. That was until another victim began to swerve into our lane.

“I guarantee you won’t win!” he promised the driver of an old Honda Civic. Fortunately the car meandered back into his own lane.

We would repeat this behavior for the next 15 miles. At one point I debated asking Gary if he needed a break and if I should offer to drive the tow truck. Sure, the thought of driving anything larger than a Honda CRV intimidated me but given this maniac’s driving, I was ready to take one for the team. Since he wanted to keep talking to an absolute minimum, I decided against the offer, held my breath and hoped for the best.

Once on my exit, just 2 miles from the service shop, Gary decided this road trip needed a grand finale. You know, kinda like all the fireworks at once on the 4th of July. We cruised through the first of two lights on the overpass. As the second light turned from yellow to red, Gary announced, “the hell I’m gonna wait for this light.” Just one mile from the repair shop and despite the light turning red, Gary put the petal to the metal and proceeded to run the red light.

The Car is Dead

As we pulled into the parking lot of the repair shop, I flung my head back on the stained headrest and breathed a sigh of relief. I hopped out as quickly as I could while Gary began the process of unhooking my car. After all the restraints had been removed, he got into the driver’s seat.

I almost smiled knowing the first leg of this train wreck was almost over. If I mall-walked home, I could have a solid 30 minutes to myself. After what seemed an eternity, Gary was still in the driver’s seat and my car was still on the back of his truck.

‘Is he jacking off in there?’ I thought. You always hear creepy stories like that.

“It won’t start!” I heard him finally open the door and bark out.

I walked over to the other side.

“Are you kidding me?” I asked now genuinely annoyed with it all. Not wanting to piss him off I wondered if he was using the key right so I just stood there shaking my head.

“Where’s your hood release?” He asked.

I had no idea. The car was too new, I hadn’t needed to look for the hood release.

“I’m sorry but I don’t know. I haven’t had any problems till now,” I said as my eyes busily searched for anything that looked like a release. Eventually he found it. It was well hidden, made to look like part of the trim.

After releasing it, he got out and popped the hood. He jumped off the platform and returned seconds later with a black box. He attached the jumper cables to whatever you attach jumper cables to, walked back to the driver’s side and attempted to start the car.

“GOD DAMN IT!” He screamed, getting out of the car and walking towards the cab again. He came back with a bottle of WD-40 and began to spray the platform behind my car. And with the tilt of the platform, my car coasted backwards, coming to a smooth stop.

The next morning I went to the service shop and struck up a conversation with the employees. They are very familiar with Gary and his antics, describing him perfectly. After telling them I was in the Valley then endured Gary’s driving, they confirmed what I had already figured out. I was safer in the Valley.

I write this two days later. My car is in a shop that has quoted me 1-2 weeks for repair. Hell, they haven’t even looked at it yet. I have a warranty and God help the warranty people if they attempt to not pay for what I foresee a very costly repair. I’ve since learned that Ford Escapes often have to have the transmission repaired. I’m still in warranty and the replacement of a transmission is not on the items that won’t be fixed/replaced. We will see!