One Futon, A Cat Lady and Meth Heads, Part 2 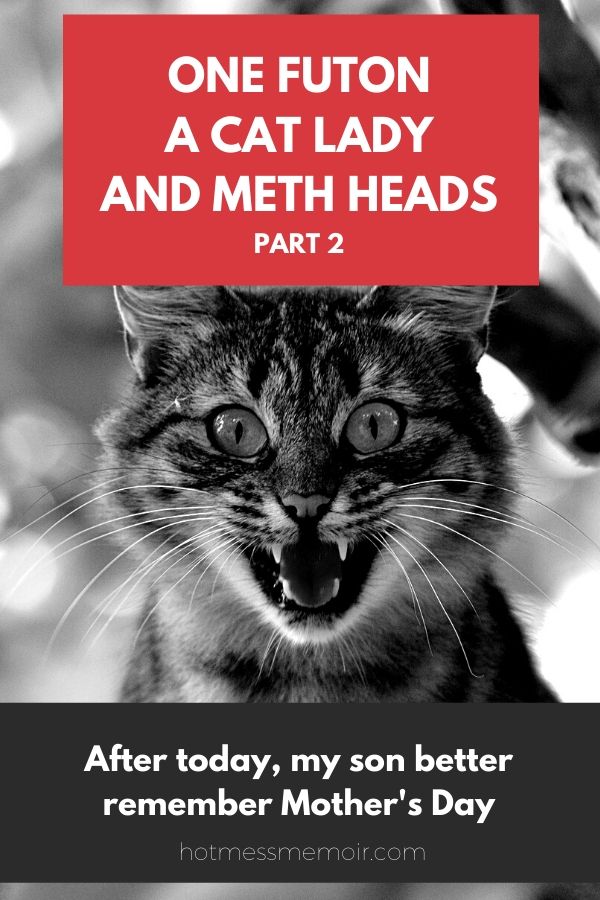 So obviously it’s been a few days since I said I would post part 2. I’ll be honest, this pandemic is bending me over. I’ve made more masks than an 8-year-old Bangladesh child should ever make in a week. That being said, here is part 2 of One Futon, A Cat Lady and Meth Heads……

I’ve had my brand new car for less than 2 months. Now you have to realize how special my new car is to me. As of mid-March, I drove a 2003 Toyota Corolla with over 300,000 miles and roll-up windows. My children were embarrassed of my car and if their friends did ride in it, they marveled over the antique, roll-up windows.

After numerous attempts, my son and I finally were able to fit the futon in the back of my car. Because of the length of the futon, my seat had to be 2″ from the steering. Obviously, this meant instant death if the airbags deployed. But hey, at least my 15-year-old would have a proper rumpus room.

I let Waze take the lead and direct us how to get back home which was about 30 miles East from where we were and completely on the other side of the city. Unfortunately, Waze was behaving like a bitter lover and sent us into the pits of hell, aka The Valley. Fate wouldn’t let us just hop on Interstate 70 and be off. No, apparently a poll came down on the main artery that fed into I-70 and Waze hadn’t picked up on it yet. This is when shit hit the fan.

The “detour” was taking a left onto a side street that was lined with cars on both sides. Only one car could pass at a time. As we attempted to navigate the street, people walked on both sides. Literally, none had teeth and were borderline anorexic. Some held the hands of children and it legit broke my heart because I knew these kids didn’t have a  chance in the world.

The farther we inched, the more dilapidated the homes became. Picking up on this, I took the next left which was super stupid because we were in an alley only wide enough for one car. A mini-van, coming the other way, decided they would be the ones to pass, not us. I carefully drove my new car into part of the grass to make way for the incoming mini-van.

“Shit! What the hell! Please don’t hit my car. Please don’t hit my car,” I screamed/prayed as it skimmed by. Fortunately, we made it to the next side street that wasn’t any better. A grown man on a children’s Huffy bike, spun by. His salt and pepper hair was buzz cut while his face was weathered by indulgence. He offered a mischievous, toothless grin while his yellow, Dollar General bag swung back and forth on the handlebar.

Waze kept trying to send us to the street with the downed pole. It was as if that was the only on-ramp to Interstate 70, in all of Central Ohio. I was completely lost. I had never been in this part of town ever in my life. Was I driving North, South, East or West?

“Screw it,” I said as I grabbed my phone and punched in my work address. “This is out of our way but at least this puts us in a safe area,” I told my son. Waze recalculated and we began to go in the opposite direction of Shitsville.

After about 5 minutes of driving, I began to recognize a major road. We had been to the casino just twice and it’s large structure began to materialize on the right.

P just looked forward, not saying a word. He’s been in the passenger seat before when I’m lost and it’s best just not to say anything. It was either that or having seen a side of the city he’s never seen before, perhaps he was contemplating that maybe our neighborhood really isn’t that bad.

“And don’t forget, Mother’s Day is in 3 days,” I reminded him. “Given what we just went through, just keep that in the back of your head.”