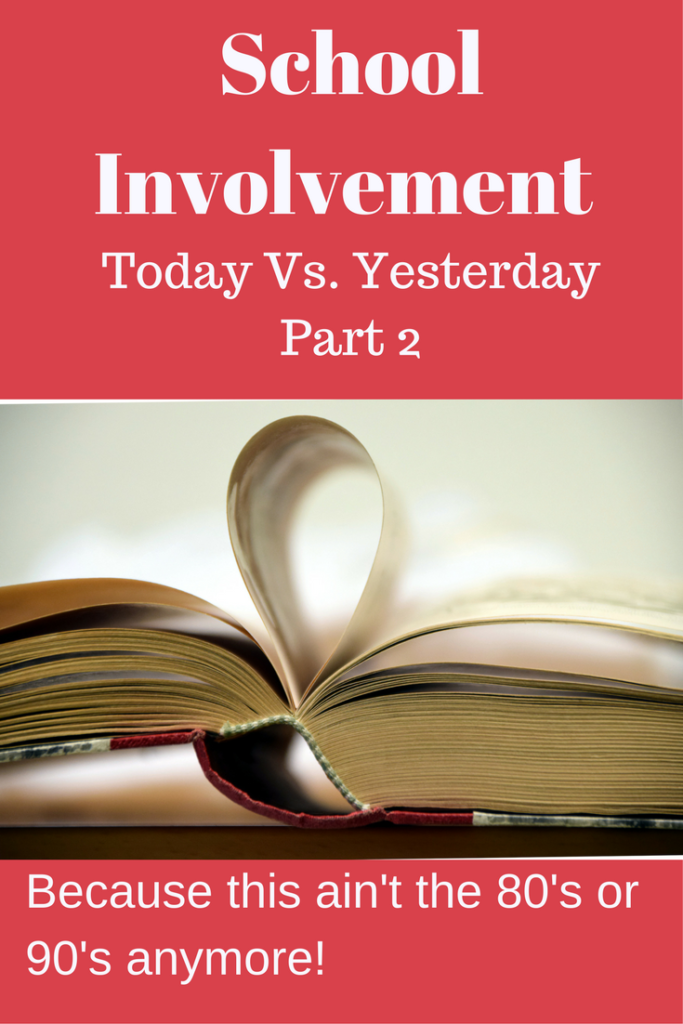 Yesterday, I whined about how parenting school-aged kids now is far different from yesteryear. You can read about it here. But I have more to compare, I just don’t like super long posts. So I give you part 2 of how much involvement is involved now versus when I went to school in 1843.

My mother packed my lunch when she wanted to. When she didn’t want to, I bought. At least that’s what I remember. None of the lunch boxes had ice blocks so all Capri Suns, ham sandwiches and baby carrots would be at an edible room temp by noon.

Buying a lunch was a luxury. People always joked about how awful lunch food was but honestly, mine was pretty good. I would look forward to such delicacies as Shepard’s pie, shredded chicken sandwiches and when the stars aligned, pizza!

I check my app called Nutri Cafe every day. It tells me what will be served for lunch at my sons’ schools. I then plead to the lunch lady Gods that both sons will find the offerings acceptable and buy. I’ve found this has a success rate of 1%.

The reason? My 12-year-old’s middle school lunches are so bad that he only buys on one day and that’s when they have Donato’s pizza. Other than that, he packs EVERY F’ING DAY! I’m half tempted to start packing corn beef sandwiches along with cauliflower and as a “treat”, Cheerios.

I tell the boys I am allowed 1 lunchable day. That is when I shove a turkey cheddar lunchable into their lunch box with applesauce, a Capri Sun and call it a day.

This is rather easy. We never had them. In fact, the town bum could easily have walked into both the public and private schools I attended, took a shit in the bathroom, walked out and he may have gone unseen the entire time.

It was controversial in my sons’ schools but it was finally approved to install and use a gate in each classroom entrance. So if a crazy person came into the school, teachers are notified and they immediately block the door with this gate.

In addition to these gates, the schools have routine lockdown drills, just as they would with tornado or fire drills. I have no frame of reference to this as again, we never had to do this so I can’t even describe this to you and what happens. I honestly think they should give the lunch ladies as well as the gym teacher guns, train them to shoot and allow them to be our first line of defense.

For 6th grade camp, we were sent on a bus to Camp Ohio for 5 days. Our “counselors” were teenagers from the high school who stayed in our cabins with us. The cabins had no running water and bunk beds that were the exact replica of what you would find in a jail cell. We were told to pack a sleeping bag and a pillow which meant you were either super hot when covered or super cold when you pushed the sleeping bag off. You  could cool off on the 3″ brown vinyl “mattress” on your bunk but then you risked lice from the last camper.

Food was in the mess hall. You were allowed 3 meals a day, maybe a snack and 0 water in between. I remember during camp and Girl Scout camp being thirstier than I had been in my life. Throw me a bone here peoples! At least provide a drinking fountain. Each night like slaves, a specific cabin was in charge of serving the food then cleaning up.

Your 5th grader goes to camp on a bus for a lofty 2 days. Cabins are replaced by dorms. These dorms include attached showering areas and of course it’s heated and clean. As parents, we are told not to pack a sleeping bag but to pack sheets and a blanket. Why this wasn’t the request from my time is beyond me. It makes so much more sense.

A college educated counselor sleeps in an area off the dorms but still within the range of the children. They are CPR certified and have been preparing for probably years for this. Full disclosure, the men that were the counselors freaked me out a little. I glared at them during orientation like, ‘you touch my son and I will fuck you up in ways you can’t even fathom.’

Food is like a Chinese buffet, because it is a buffet. 3 times a day they can have as much food as their pre-hormonal bodies desire. And it’s not shit food either. It’s meatloaf, pizza, mashed potatoes, etc. Water is always available and the kids are encouraged to bring along a water bottle. And someone cooks all of this food. All they have to do is throw their plates in the trash.

So I’m done. What are the differences I didn’t touch on? Will it be different in the future, like my son will complain about the dorms while his kids are staying at the W?