You Want a Sandwich? Go Ask Your Stupid Hero To Make It-Part 1of 3 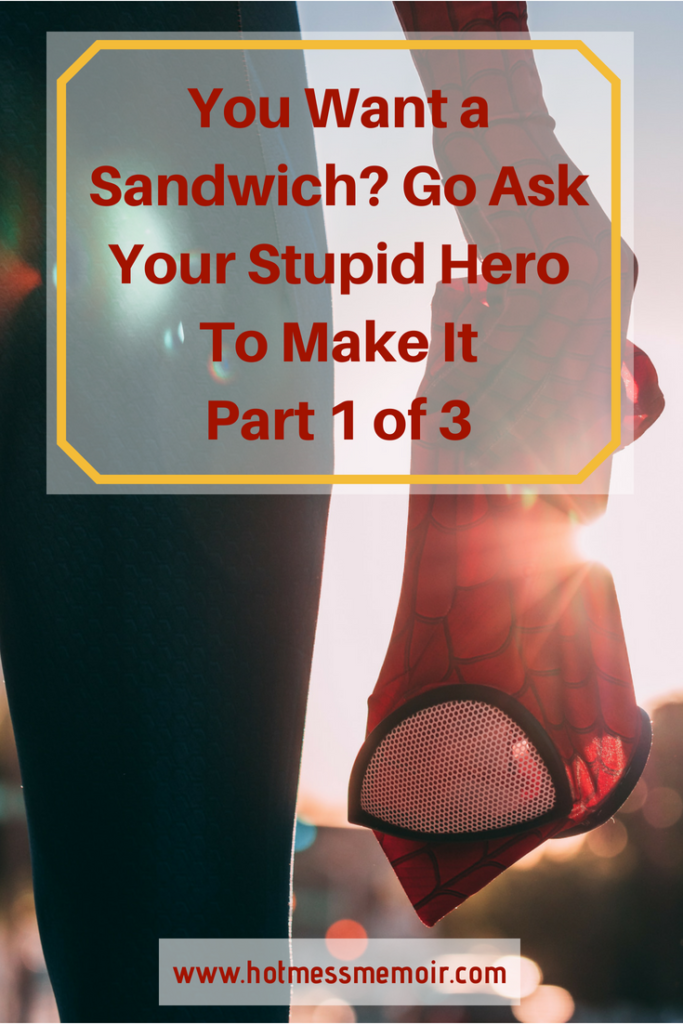 So last week as I spent the 183rd day of school, reviewing my son’s homework he claimed he didn’t have, I came across this little abomination: 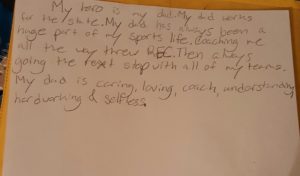 If you can’t see the image very well, allow me to type out the words that stabbed me in the back: My hero is my dad. My dad works for the state. My dad has always been a huge part of my sports life. Coaching me all the way through REC then always going the next step with all of my teams. My dad is caring, loving, coach, understanding hard-working and selfless.

I just sat there staring at the letter for what felt like an eternity, in complete disbelief.

Normally I could be mistaken for Powder and suddenly I had Samuel L. Jackson living inside, expressing the anger I was too distraught to convey. I needed to rein it in.

‘Why aren’t I your stupid hero?’

I thought about waking him up to ask him this very question despite it being 11 PM. I felt as if I had prepared for a job interview and feeling like I nailed it, only to receive a call from a 23-year-old, HR Specialist stating “you did nothing wrong, they just went in a different direction.”

Yes, that is what I wanted: mommy feedback. I wanted a mom review similar to what you receive at work. I wanted P to tell me my strengths, as well as my opportunities. I wanted us to come to a collective decision (though it never is our decision now is it?) on what my 2016 goals would be. 6 months later, we would sit down for my mid-year review to see if I were on track to become his GOD DAMN HERO for 2017. Instead, I opted to walk up stairs and tuck him in.

‘You’re a child,’ I thought. ‘You know not what you do and obviously you made a mistake. You’ll learn.’

After I returned downstairs, I began to release my inner Samuel L. Jackson, transitioning to a full-blown meltdown. I furiously grabbed my phone and sent the above image along with the following text to my sister:

Fortunately, 8 hours from then I had an appointment with my Psychologist. Before you all think I’m bat shit crazy, I believe EVERYONE should have a good Psychologist in their corner. It’s healthy to have a non-bias individual to talk to for 45 minutes, but I digress.

I walked into Dr. Weber’s office and sat down. I began to sob.

“I’m not his hero. He picked his dad! His dad! I mean…..I shit,” I was now pointing at him like a cast member of a Lifetime Movie, “….on a the delivery table in front of not only my husband but 2 strangers, birthing him and he can’t choose me to be his hero? Have you ever had anyone crap on a table for you? I doubt it.” I said looking away with equal parts frustration and smugness.

Dr. Weber just looked at me, probably using every ounce of education and restraint to keep a professional demeanor.

I did have to watch my language around Dr. Weber as he was a full-blown church goer and I didn’t want my well-educated sailor mouth to get me kicked out of the office of what I feel is the most gifted Psychologist in the world.

After about 20 minutes, Dr. Weber talked me off the ledge and I began to feel “braver” about the whole situation. I decided to do what I normally do in depressing, frustrating, shitty-ass situations: make fun of it and laugh at it.

So that is part 1. I can assure you, this WHOLE ordeal becomes even a bigger train wreck.