5 Ways to Be a Decent Internet Troll 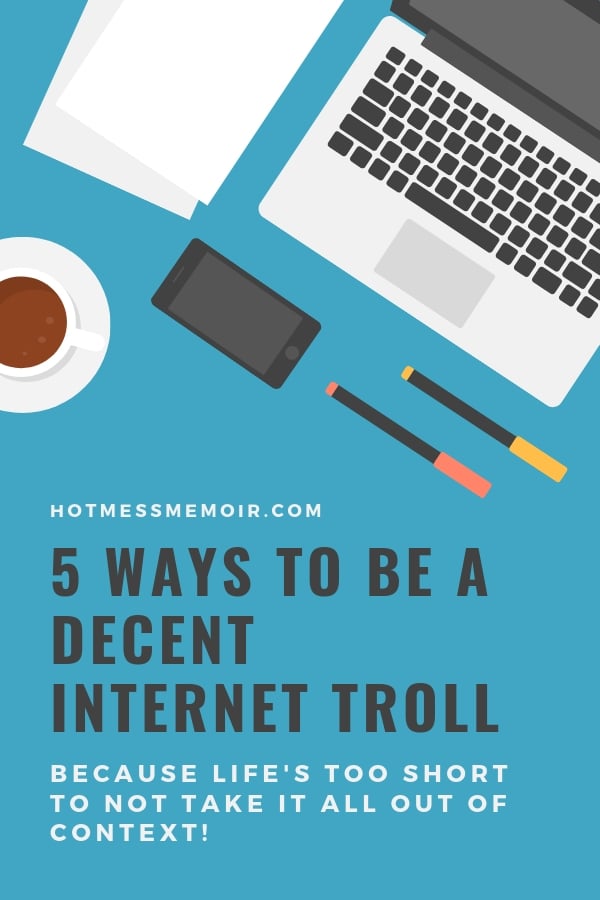 I cannot stand internet trolls. Internet trolls strike me as the most depressed, angry, joyless people on the face of the Earth. So much so, I have a whisper of sadness for them. My first internet troll was on Reddit. I was jealous of my husband and wrote about it. My son had a school project of writing about his hero and he chose my husband and not me. I was then insulted on Reddit, telling me I was horribly selfish and lacked grammar.

I have a long commute to work (50 minutes) and considering I have the attention span of a squirrel, I find myself listening to everything. From podcasts to a book on audio to music to YouTube videos, I listen to it all. Don’t worry, I only watch the YouTube videos when I’m at a complete stop. I can’t watch the video and put my makeup on at the same time while driving. Duh…..

The videos were pretty interesting. They ranged from the psychology of a troll to what to say to a troll. There was even a Ted Talk of a female meteorologist and how she communicated with her trolls. She had a great motto: “Don’t feed the trolls”. I really liked it and I’m seriously considering putting that on a shirt with my cricut. She also taught me something new! When we think of trolling, we think of the crumudgeon under the bridge. But guess what? The internet troll got it’s name from a fishing technique!

Where Trolling Got It’s Name

Trolling is a fishing technique where the fisherman casts many lines in the hopes he will catch something. I totally didn’t know that but it makes sense. Trolls cast lines by commenting on social media and blogs, hoping to get an uprising.

5 Ways to be a Decent Internet Troll

Go completely off topic. Like seriously, if the person was talking about how important vacinations are, make sure to explain that there are more important things to worry about like peanut or gluten allergies. Throw in a story you read once in a 2011 edition of USA Today to really drive home your point. Oh yeah, make sure to make the author feel really insensitive during all of this.

Only You are Allowed an Opinion

Only your opinion counts and don’t you forget it! Even though you don’t have a tollerant bone in your body, put up the front that you do and make sure you shut down all opposing views. You are master of your troll universe! You’re right. Everyone else is wrong and bad.

Make sure to add to, if not to all comments, the following: “Just Sayin'” This shows you have a point of view but you’re a laid back troll. You said sayin’ in lieu of saying so yeah, you’re totally approachable and loveable!

You’ve never had a negative thought in your life and never made fun of anyone or anything! That’s below you. You’ve never gotten with a bunch of girlfriends, poured wine and gossiped. You are the Buddha of our society and we must hear what you have to say.

Take Everything Out of Context

This is really vital to your success. Take EVERYTHING out of context! If someone’s venting about say, not wanting to make another school lunch because they’re tired of making lunches, make sure to remind them of all the parents who would love to have that problem. If someone tweets “Ugh, I hate Mondays! I don’t want to go to work!” Make sure to remind them about how selfish they are being. You’ve never complained in your life. Why should they?

So trolls, I am so happy we could have this chat. I CANNOT, CANNOT wait for the comments. In fact, I want to hear what I’ve missed. What else makes the perfect troll?