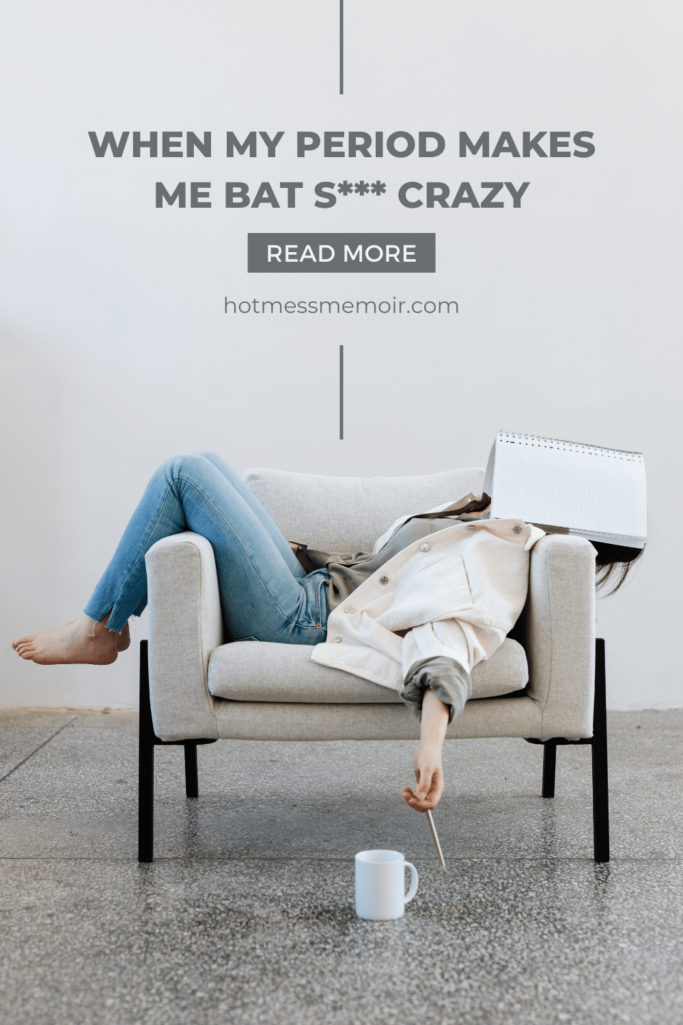 Currently, I’m laying on my bed without the bedspread because my dog is in heat and managed to bleed on it. Don’t flip out dog nazis, her appointment to be fixed is in July. I have my earplugs in and if anyone dare try to talk or touch me, I’d probably attack at this point. Really, I’m self-isolating and probably should have hidden my phone to avoid another form of communication with humans. Right now, I hate everyone and everything.

You see, I started my period this morning and it turns me into Cruella de Vil…or my 3rd-grade teacher that happened to be a nun; same difference. For roughly 2 days, it’s like an itch I can’t scratch. During this time, I’m annoyed, depressed, frustrated and self-loathing. I’ve been home for less than an hour from a Detroit soccer game and I’ve already cried. I’m a hot mess. 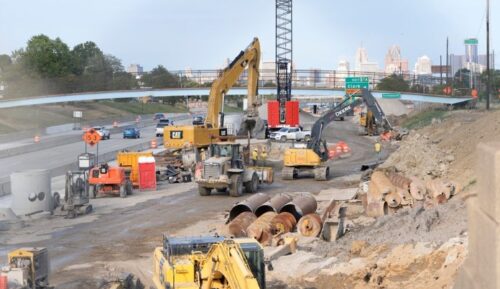 At 9:30 this morning, my 13-year-old son and I got into our SUV to make the 4-hour journey back to central Ohio. He decided to sit in the backseat, leaving me alone upfront. He had just lost his second game of the weekend and wanted to lay down which I didn’t blame him. What I didn’t factor in until we were in the thick of things was the crazy drive that is downtown Detroit.

If you’ve never been on downtown Detroit freeways, let me paint a picture. Driving (or surviving) Detroit freeways, instantly transports you to a scene from Mad Max. Like when they’re in those dune buggies, driving at breakneck speed. The characters have a wildness in their eyes and are bat shit crazy. That’s what Detroit freeways are like but replaced by things like that tinted window car that weaves in and out of traffic, not afraid to die at 90 mph. And with the concrete barriers forming 2 lanes, barely wide enough for 2 mini coopers, there’s always a 53′ truck that can’t seem to stay in its own lane. To round out the insanity, the 97-year-old has decided to take their Ford Focus for a spin at the nimble speed of 7.

The Period Makes an Entrance

I’ll also add that many roads run parallel with the freeway so when your GPS tells you to go straight and there are 2 roads in front of you, you have to hope you picked the right one. I came upon one such road and almost missed the stop sign, slamming on my breaks. Sir Carter was lounging in the back like an Arabian prince. He had his Apple AirPods in, mindlessly shoving Doritos in his mouth while watching Planet of the Apes.

“MOM! WHAT THE HECK?” Carter asked annoyed. All 132 pounds of him whirled onto the floor of the SUV.

“You don’t have to drive like that,” he barked, picking up his phone from the floor. Instead of continuing the movie, he began texting.

This rubbed me the wrong way. In 24 hours I would have driven eight hours, spent $95 on gas, got him to the soccer field by 7:15 a.m. on a Sunday and he didn’t like my driving? I hadn’t spent a weekend home in 4 weeks thanks to soccer and I was at my wit’s end. I lost my shit.

“Who are you texting Carter? Your dad?” I said like a snotty teen, pursing my lips together, eyes open wide in curiosity as I looked at him in the rearview mirror. “Don’t worry, I’ll be texting him too,” I said as I picked up my phone dramatically. “I don’t know if you think you’re going to be gently rocked into a gentle slumber but we could have potentially crashed had I not stopped at that stop sign!”

Lulu and Her Presents

We finally arrived home around 3 PM to a very excited 3.5 lbs Chihuahua. It’s precious when she gets excited because she magically spins herself in the air, multiple times. It’s adorable and I want her to do it every single day. In fact, I want my sons to learn to do it when I walk through the door after work. Perhaps being teens, I should just settle with a hello.

It took me a second to realize she didn’t have a diaper on despite being in heat. Now, I know what a bitch it is to put a diaper on her. The stars have to align to get her tail in the hole, and the sides of the diaper over her knees (or whatever you call the bendy part of a Chihuahua). I must say though, when the diaper hasn’t cleared her knees, she looks like one of those teens with the sagging pants, purposely worn low so you can see the tops of their boxers. It’s hilarious.

Not only had Lulu shit in the front room but pissed in the living room with little flecks of dried blood scattered about. I gave my husband the benefit of a doubt and searched for a stray diaper. Maybe Lulu had gotten it off. Nope. 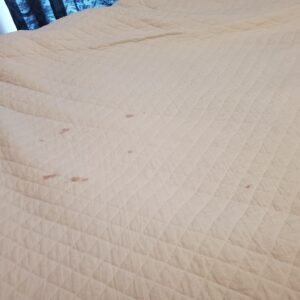 I walked up to our room to find the duvet that had already been washed twice this week, sprinkled with little brown dots on it. I sat on the bed contemplating if this would be the hill I die on.

I grabbed my phone took pictures of our bed and began texting my husband about all the special surprises I had found after my 4-hour drive home. He was on his way to our 17-year-old’s soccer game. He swore up and down that she had not bled at all, thus not needing the diaper. Funny, I noticed how additional precautions were taken for our sofa. A brown blanket had been spread across it. All I heard from him was,

“I didn’t want to fuck with putting a diaper on something the size of a rat.”

When you’re on your period, what’s more perfect at the end of the day than watching a movie that has a sad ending? Spoiler alert!

I told myself I’ll watch the movie but under no circumstances am I to watch the ending.  I usually don’t watch sad movies. My view is we watch movies to escape the shitty things in life. We don’t need more shitty things to think about. But by the time we got to the scene where he’s a pre-teen that was found living in an abandoned building, I said, ‘fuck it, I’m not a quitter,’ and soldiered on. Ten minutes later….

“Why did he have to die,” I whimpered, wiping the tears with the back of my hands.

I did that obnoxious thing where I sucked in too much air and sniffled. I began chanting the following mantra as I always do on the rare occasion I’m watching Wind Beneath My Wings, Steel Magnolias or Bad Moms……..

I won’t go on anymore other than tell you Monday was a complete repeat of Sunday. I hated everyone, everything and myself. Sunday night, I started writing this and now it’s Tuesday evening. I’m coming out of the grips of anxiety, depression and mood swings. I think women should have the option to go to a government-funded spa these days with the option of a padded room with wine. Or maybe every home should have a scream pillow and/or punching bag. I think both are a good idea.