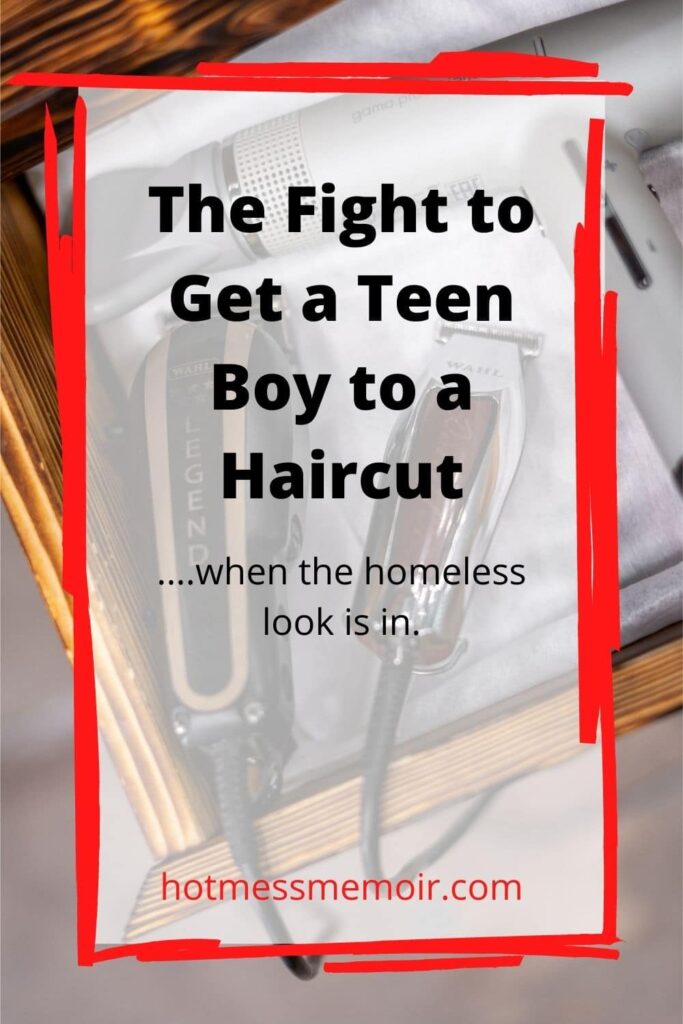 It’s been a nightmare to get my youngest son to get his haircut. For those of you residing somewhere other than the U.S., the homeless look is the go-to look for teen boys. Below is a pic taken a few weeks ago. Aside from one mom refusing to let her son look like a hobo, you can see what I mean: 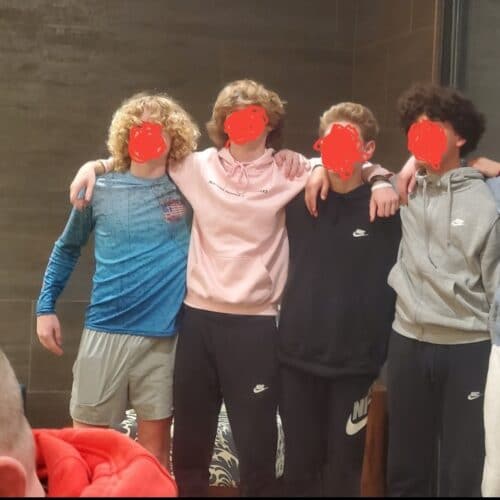 My son is in the pink.

My in-laws returned from Florida this week and stopped by for a visit. I knew they would be disappointed in the length of his hair so I jumped on the topic immediately, as we sat around the kitchen table.

“We’ve tried to get him to cut his hair and he’s adamant about keeping it long,” I said.

“Actually,” my son corrected me as he cusped the ends of his hair in attempt to get it to curl up. “I’ve been telling you every morning I want it cut.”

‘Excuse me? Come again?’ I thought. I couldn’t believe he actually said he’s been wanting it cut. He’s come up with every excuse in the book for the past two months and now my blood was boiling.

Regardless, I smiled and sweetly said, “that’s simply not true. I’ve offered to take you a million times and you don’t want to get it cut. But if you want it cut, we’ll cut it.”

I smiled and that was that.

That was Tuesday, today is Friday and my oldest announced he was going to Great Clips to get a haircut. Since my youngest claims we’ve been neglectful, this was the perfect time to right the wrong.

“Please take your brother and make sure they cut enough so it’s not in his eyes,” I demanded. I then text my youngest that he would be departing with the oldest in 30 minutes. The response back was sarcastic: “oh ok sure I want to get a hair cut right now.” I didn’t respond as things were going downhill quickly. 20 minutes later C comes down and announces, “well if we aren’t getting food, I’m not getting a haircut.”

“We are getting Firehouse Subs and even if we weren’t, you’d still be getting a haircut,” I declared. Someone was getting a little too big for his Nike shorts.

“Well I’m not getting it cut so it’s out of my eyes,” he protested.

The Call to Great Clips

After my oldest lost a 5 minute negotiation on why he should take one of our cars in lieu of his to save on gas, they were on their way. I picked up my phone, hit Google and commanded, “call Great Clips Reynoldsburg.”

“Hi, you’re gonna have 2 teen boys in about 10 minutes. They’re gonna look homeless, especially the younger one. I want his hair cut so he can at least see so tell all the ladies in there what I just said. And if they don’t tip you 20% please call me back. Oh and,” I finished conspiratorially, “this conversation never happened.”

Twenty minutes later, my phone rings. It’s my oldest. I swore to all that is holy if this was about a refusal of a hair cut, I was gonna lose my shit.

“Mom, he’s refusing to get his hair cut anymore.”

“Well how short is it?” I asked annoyed.

“It’s short enough in the front but barely any taken off the back,” he reported.

You see, the youngest isn’t spoiled or bratty. I’ve always bragged that he’s been the easy one. Dare I say even laid back? But when it comes to his hair, he turns into this Mariah Carey, Cher and Whitney Houston raging machine that I don’t recognize. He could have fuckin’ Johnathan Van Ness cut his hair and he would leave in tears declaring, “I look like an 8-year-old!”

“You tell him that he either gets another 1/2″ inch cut off or he’s grounded.”

“Mom said you need to get another 1/2″ inch cut off or your grounded,” P yelled from his phone.

“For how long?” I heard C’s voice challenge back.

Are you kidding me? I didn’t wait for P to repeat what C had said.

“Listen up, this isn’t a negotiation,” I told him. “You have them cut another 1/2″ off of your brother or all hell is gonna break loose when you get home,” I said firmly and hung up the phone.

10 minutes later my husband began to chuckle. Being Friday, we both work from home and each have a desk in our front room. I come to find out, C is sending the below texts to him, in all caps:

MOM IS SO ANNOYING

I HATE HER WITH EVERY BONE IN MY BODY

I’M GOING TO BE MADE FUN OF

MY LIFE IS RUINED FOR 2 WEEKS

I’M NEVER LISTENING TO HER AGAIN

IT’S NOT HER HEAD, IT’S MINE

And my personal favorite: SPRING BREAK 2022 IS DOWN THE DRAIN

With this last one, I had several questions. Where the fuck did he think he was going for Spring Break? Cancun? Daytona Beach? We’re you gonna be doing shots off an 18-year-olds ass? By Spring Break being “ruined”, was your X-Box Avatar now going to have the same haircut while you played hours on end of video games in the basement?

When they returned home with Firehouse subs and their new haircuts, they both looked better. They were definitely out of the homeless bucket and now maybe in the half-way house, getting job training and veneers bucket. We didn’t eat lunch together and he refused dinner so we wouldn’t have to sit together. He doesn’t want to talk to me and honestly, I don’t care. He needed a haircut, I’m the parent and I did the right thing.

Now it’s you’re turn. For those of you with teens or adult children, do you have times when parenting where you’ll always love your kids but sometimes, you just don’t like them very much?