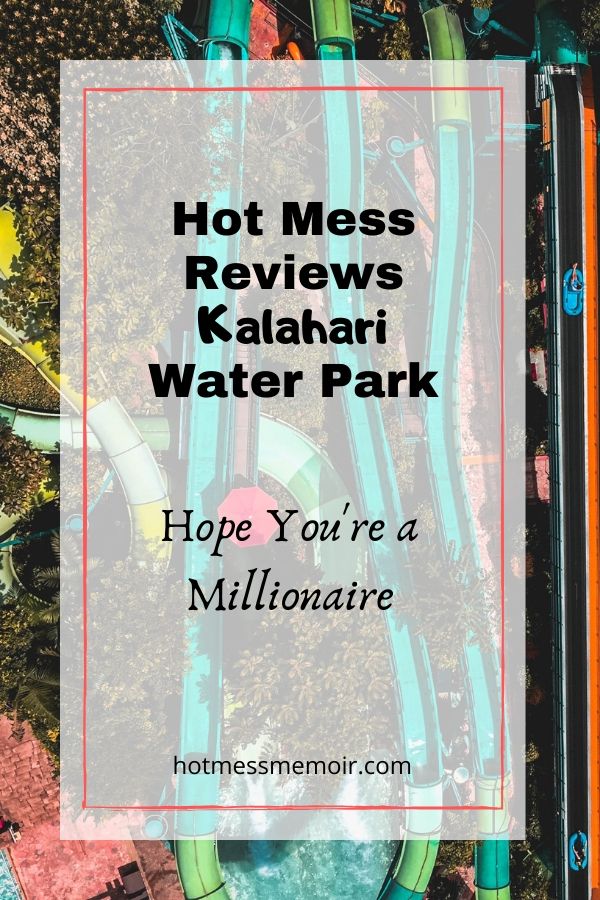 My son turned 11 this past Thursday. Against my better judgment, I suggested Kalahari water park in Sandusky, Ohio for his birthday. I’m officially kicking myself and regretting it as we sit in our room. We’ve been here before and thanks to my sandwich trick last time, we scored a 2 bedroom with a kitchen and fireplace. They’re 100% sold out and obviously the sandwich trick didn’t work today so I have this ass hole staring me in the face as I type: 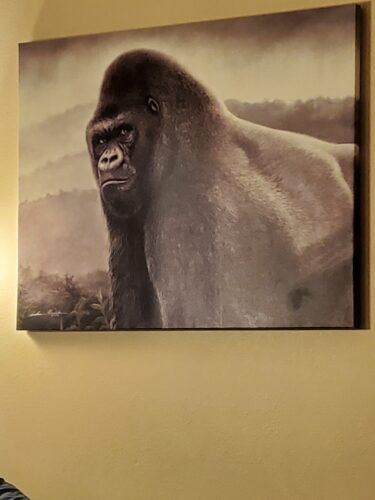 After going to the room and changing, we headed down to the waterpark. My husband and I wanted to go into the adult-only hot tub however we couldn’t leave our stuff on a chair since we had 2 cell phones, a Fitbit and a wallet.

“They have lockers, I’ll just go rent one,” I said.

After going to the lockers and not seeing a way to put the quarters in or the keys hanging out as they normally do with a plastic wristlet, I went to the front desk to rent one.

“How much do the lockers cost?”

And when she started to say, “Twenty-five,” I thought she was about to say twenty-five cents. Nope, she said,

WTAF? We paid $279.99 for a room with entrance to the waterpark and they can’t have the decency to provide lockers as an amenity?

And let’s talk amenities for a moment, shall we? In addition to the $279.99, they charge a “resort fee” of $29.99. So why aren’t lockers included? But what does the resort fee include? Now, if you go to most hotels, I’m going to highlight in red what is normally included in the actual room rate:

Can’t Get Into My Room

After refusing to pay $25 for a locker, I decided to head up to my room to stow our valuables. What was cool is your wristband is your room key so you get right in. What wasn’t cool is my wristband didn’t work so I called down with the phone next to the elevator and asked that they bring me a new band. Ten minutes went by and no new wristband so I called back down to customer service. She was apologetic and vowed to follow up with the person that was to bring me my wristband. After ten minutes, a gentleman shows up without a wristband in which I was livid. He said he wasn’t told to bring one up and just used his magic key fab that allowed me in. I told him to forget it and I would come down to get my new wristband.

We didn’t eat lunch till like 3 and by then I was starving so money was of no concern to me. It was, however, a concern for me when I was given my total. Are you ready for this?

I about fell down at the cost. I knew it would be expensive but $32 fuckin’ dollars for 2 cheeseburgers and 2 waters?

We ate at their “nice” restaurant called the Ivory Coast. After eating the greasy cheeseburger from earlier, I wanted something semi-healthy and settled on a Ceasar salad. It wasn’t great. It was on par if you were to order a Ceasar salad at a hospital. The chicken was dry and chewy and the dressing seemed extra acidic. My husband ordered wings and my son and his friend ordered chicken fingers. Our bill after a tip was around $68. 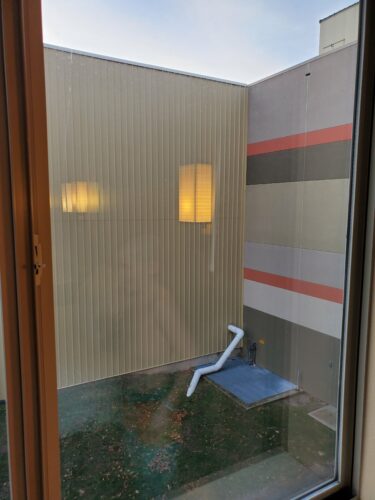 Our view from our window.

Have you ever been to a hotel where the room was thoughtfully designed? Like there are outlets where you need them to be. Or there are (dare I say it) hooks in the bathroom to hang towels. Once we stayed in a hotel where there were filtered water stations on every floor and in the evening, a little brown bag of snacks was hung next to your door.

Yeah, this isn’t one of those thoughtfully designed/maintained room. This would be the type of room I would announce “ignorance is bliss” and not bring in the black light. At least we have an awful view as you can see to the left. I really think this is officially the worst view I’ve ever seen from a hotel room, except for the bumb pissing by the river once but that’s for another story.

And when I walked in the room for the time, here’s how the blanket was folded. Apparently they’re employing middle-schoolers because that’s how they normally fold a blanket. Also, a full ironing board was too much for Kalahari to splurge on. 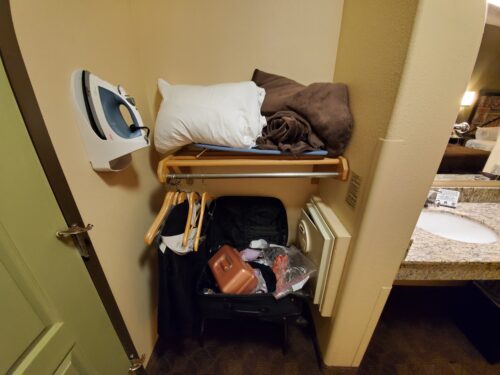 The People Watching is Amazing

God the people watching is amazing. Sure, a baby shit in the wave pool and so everyone had to vacate it for an hour. I felt so bad for that one employee that wore gloves and had a red hazard bag that had to clean it up. Have you ever been to a waterpark and you feel like some people have spent their entire life savings on this place? Like you know they can’t afford it yet they’re carrying around drinks the size of a 30-pound dumbbell. And I’m going to leave you with one last comment and be done ranting:

Just because you’re allowed to wear a bikini, doesn’t mean you should.

Well, I’m off to get a dumbbell drink.