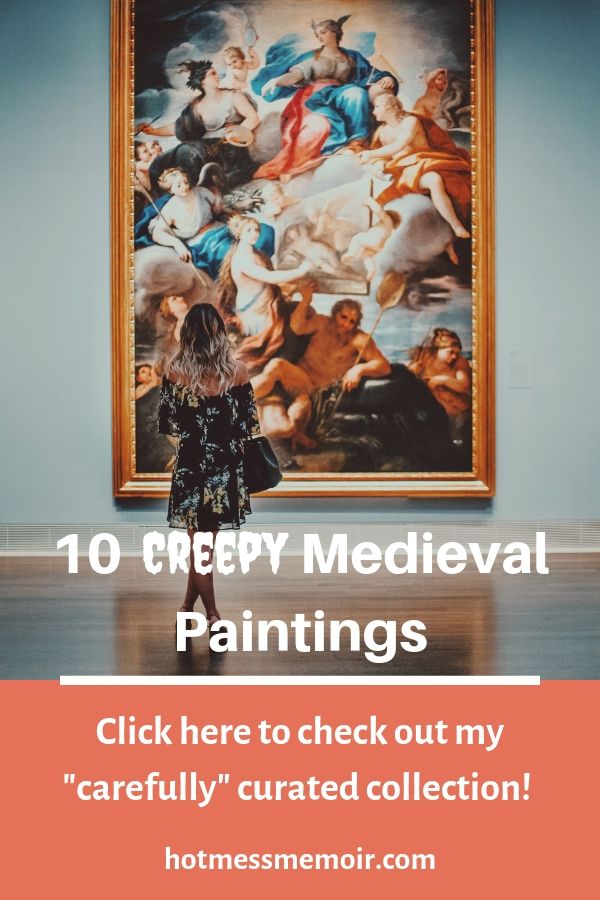 I don’t know what brought this to mind, perhaps it was something on tv but I always thought to myself that much of medieval art is creepy and weird. I really don’t think it’s a matter of us not understanding what life was like back then. After all, a butt is a butt is a butt. So I thought it would be fun to scour the internet and bring to you some of the oddest paintings I could find but also comment on them. I could totally see this being a series and do different time periods with the oddest paintings if you guys like these. Enjoy!

The Hover Method in Medieval Times

Ladies, you know how you use the restroom in a really nasty stall and your goal is to touch nothing? It’s the hover method right? Where you don’t sit but you practically pull a muscle squatting. I think that’s happening below. Perhaps the guy with the WTF attitude doesn’t realize this is a public bathroom? I also think the dude on the left is holding his hand out like, “get us some toilet paper or leaves or something.” Hey, the friends that hover together, stay together, am I right? 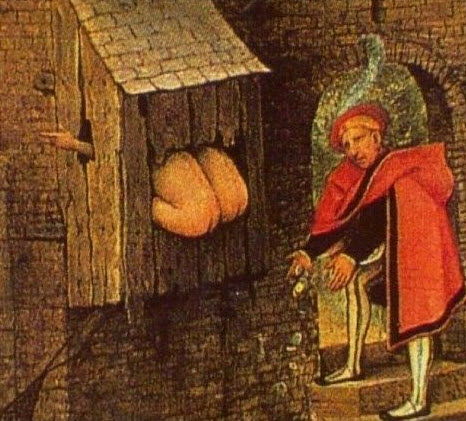 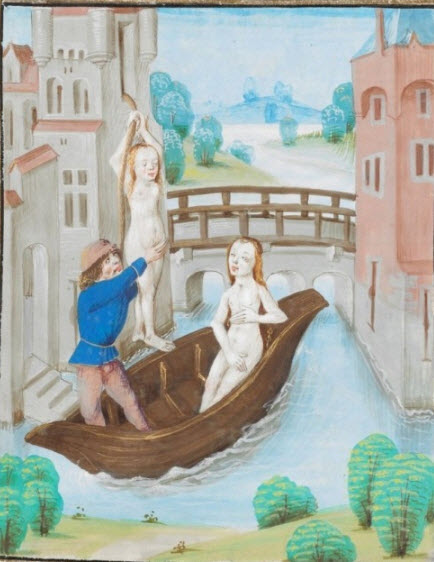 This painting creeped me out so much, I had to do further research. I needed to know what that piece of yarn represented. Apparently, this painting was to denote that those super long tapeworms would occasionally find their way into European nobles and it wasn’t just a thing happening in Asia. You know what, this is on par with that reality show Dr. Pimple Popper  (BTW, I kept my eyes averted when looking for the link for Dr. Pimple Popper. I knew if I saw any of those images, I was gonna to throw up in my mouth). Keep that shit private! 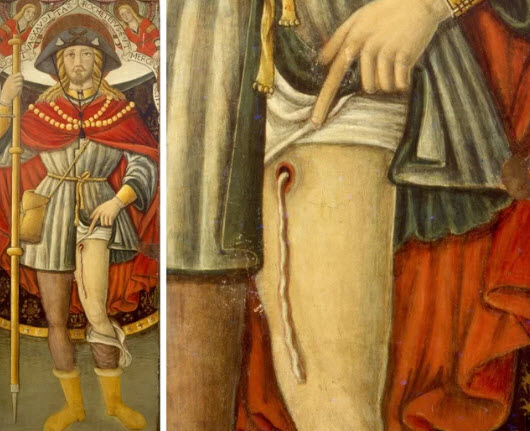 OMG….I just had a realization just now as I was typing the title of this painting. I thought this guy was pissing blood, like he just had sex with the 2 women in bed and contracted a rare but aggressive venereal disease. Now, I acknowledge that there was a knife laying on the floor but I just realized he’s holding his own balls! Oh my God, where do I start? Why did he do this? It’s one thing for one of those women to do it, perhaps as revenge. But they’re clearly comfortable, reclining in their sleep number bed. Meanwhile, George here, has sliced off his own balls. Was he on drugs? He almost has this look on his face like, “LADIES! EWWWWW…..WHAT DO I DO?” I may have to research this further by Googling “was slicing off ones scrotum a thing in medieval times?” It’s definitely a question I’m saving for when I attend the renaissance festival in September. 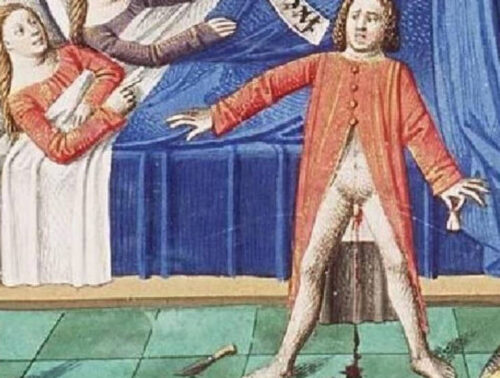 To piggy-back on Mr. Tinkles above, let’s compare and contrast scrotum sizes here. Mr. Tinkles looks like the size of a Chihuahua’s, while Mr. Cocky below resembles a cow’s udder. Is he flashing the priest? It just looks like he’s opened his tunic and was like, “here I am! Rock out with your cock out!” Jesus! 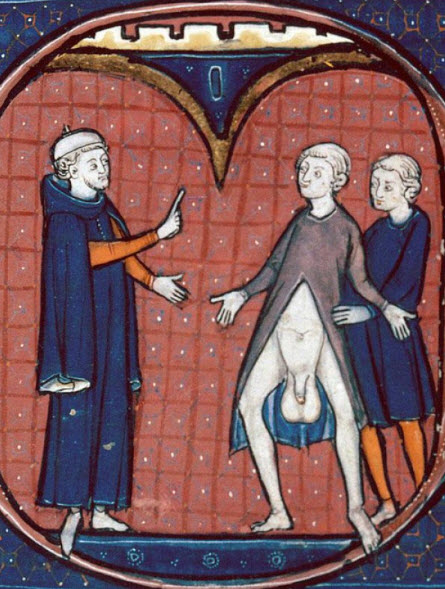 I think the bird is feeding the human here. Meanwhile, you have another guy feeding another guy out of what looks to be a peacock? So to sum up this acid trip, 1 man is being fed by a bird, another by a peacock, everyone’s naked, a few are half fruit and they’re also doing handstands. 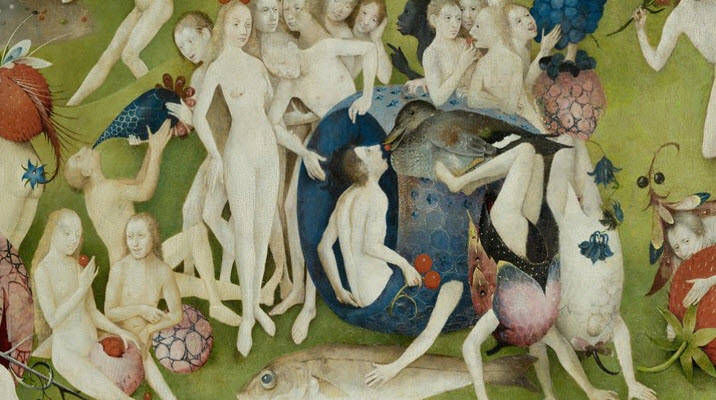 “I’ll hold your hair!” I envision the woman saying to Amy, who’s clearly had too many shots. If I’m an aspiring painter, one of the things I would not be painting is of someone puking in the bushes. I totally get if you’re tired of painting bowls of fruit, but vomit? I don’t think so. 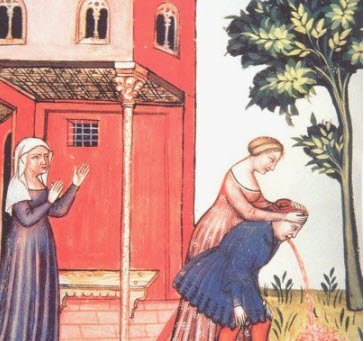 Does this not look like the Starbucks symbol or what? Hell, maybe their logo is from this picture but aside from the nudity, it’s spot on! I never really understood the 2 fishtails though. 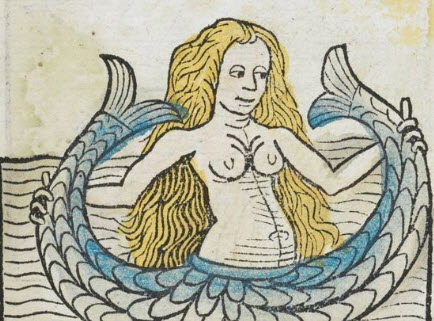 Why was this painted? And is this a dog or a cat? We’ll go with a dog for now. Dogs do a million other things. Why did you paint a dog licking their ass? Like it’s a straight forward question and I wish the painter was still around to ask. 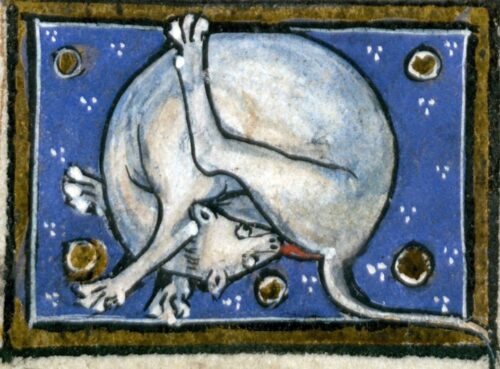 The Best Dating Profile Pic Ever

And along with this profile, I envision the following bio:

“Hi! I’m a playful jester that just wants to play peek-a-boo with you! While watching you sleep at night, I’ll smile just like this as I rub my scissors closer to my chest, contemplating my next move. I love drinking a cool glass of ale while walking my walking stick.” 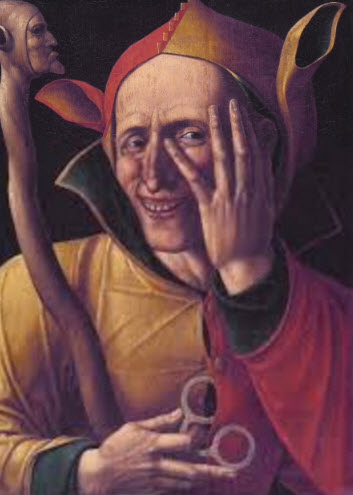