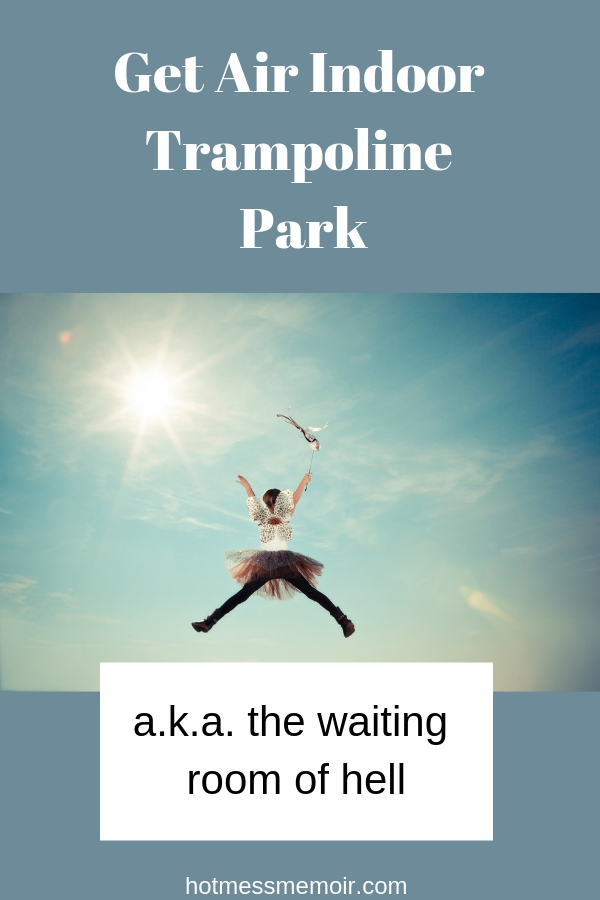 I’m currently sitting at a picnic table in what I’m certain is the waiting room of hell. I’m at an indoor trampoline park about 10 miles from my house. Showing precaution for once in my life, I decided to bring ear plugs. I have the ear plugs crammed so far down my ear canals right now that I’m probably going to burst my ear drums.

This place is a fucking nightmare on so many levels. Let’s start with the music, it’s blaring as if we’re in a 90’s disco. Apparently the screams of 200 children wasn’t enough stimulation for the owner/operator. The walls are purple and green while the flooring is this coordinated number: 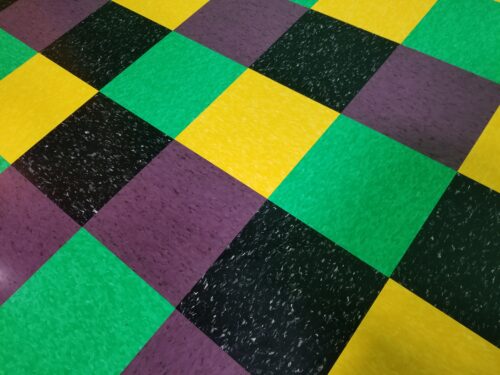 The parents area is reminiscent of a planned parenthood waiting room. It contains 3 long, futon-looking sofas painted, you guessed it, purple and yellow. Rather than placing the sofas up against the wall with the 4 outlets so people could charge phones and laptops, they opted to make a rectangle with the sofas. There is one broken massage chair on one side of the sofas and I’m confident this woman is NEVER going to leave. She bothers me because it’s the one seat closest to the outlets.

And did I mention that Get Air was built in a fortified bomb shelter? It’s really in a shopping center but there’s 0 reception for phones or internet.

Yes, there’s free wi-fi. Free wi-fi that doesn’t work. The only thing I can do, electronic wise, is send texts.

As I mentioned, I was sitting at the only picnic table in the place. Just when I thought things couldn’t get any worse, a family that clearly didn’t want to pay for a birthday room, brought 6 Little Caesar pizzas in and plopped down the entire family, at my table. As they got up and down, the table shook, which annoyed me to no end. They kept inching into the small space I had carved out at the table. It was like I was the intruder. First of all, I was pissed the management didn’t inform them it’s not ok to bring in their own food. Then again, even the grandmother looked like she could bitch slap me, on to a trampoline so it was probably best not to stop them.

Other annoying things this family did? At one point, a little girl decided to sit on my coat while eating her pizza. Again, I was at their table. The matriarch of the family placed her open water bottle 5″ from my laptop, making me cringe that she was going to spill it on the keyboard.

‘I’m not moving, I was here first,’ I told myself.

By a miracle, the lady lounging in the massage chair decided to get up. I raced over to claim it. They could have the stupid picnic table, I was going to charge my dying laptop.

After 56 minutes, I gathered up all my stuff, anticipating the announcement that if you had a blue wristband, your time was over. Like clockwork, the announcement came. My son and his friend did not. 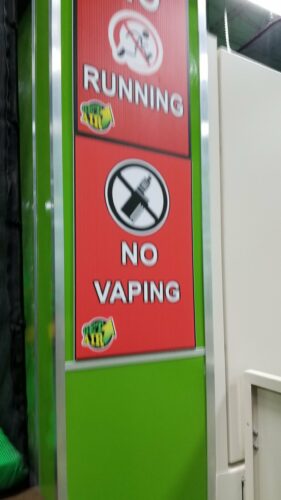 ‘Play it cool Angela, he’s havin’ a good time,’ I said to myself.

By now I had parked myself by a net to look for Carter and his friend. I looked over to find this sign on the wall. Have they had that much of a problem in the past that they needed to put a no vaping sign up? Classy.

I waited patiently for 1 hour and 15 minutes until I couldn’t take it anymore. I walked over to the front desk and ask that they call blue again. When this didn’t provide the intended results, I resorted to marching into the trampoline area and scream my son’s last name. At last, I had proof of life.

On our way out, Carter announced that we need to come here all the time. His friend adamantly agreed. Though I had a smile plastered on my face like a Stepford Wife, shaking my head in agreement, here is what was really going on in my head:

‘This will NEVER happen again. It will be a cold day in hell before I come back here. You want to come back? Better hope one of your friends host their birthday here.’