The 5 Types of Drunks- Which Drunk Are You? 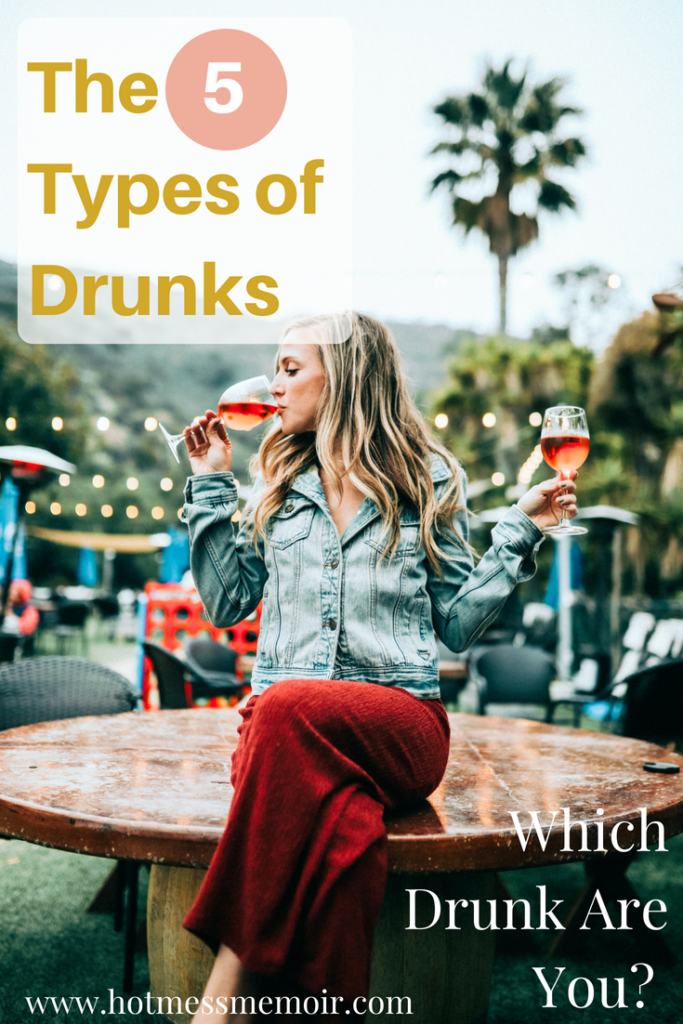 Today at work, my co-worker told me about her evening at a bar with a few drunk people and her gentleman caller.

“This man wouldn’t leave D alone. He kept coming up and touching him. Then, a woman began to play with my hair.”

“Shut up!” I said in disbelief. “I hate people like that. Did you even know her?”

“No! Never seen her before in my life,” she responded.

This is when I got the idea that we should outline the 5 most common types of drunk people. At one point, I think I have been every one of these and then some.

I’m especially fond of the philosopher as they suddenly have all the wisdom of the universe. They will advise you on all matters of life, even if you didn’t ask for it. Normally, this type is a white male over the age of 35, usually closer to retirement. I have however been known to dole out advice even when I wasn’t asked. Here, allow me to demonstrate:

“When you due?” I asked the very noticeable front-desk, pregnant woman on my way to the restroom at the Fairfield Inn. We were there for a soccer tournament and all the parents were 3 sheets to the wind.

“2 weeks,” she said flustered and praying I’d go back with the other moms.

“Look,” I slurred. “You don’t need to be anyone’s hero. Don’t try to do a stupid natural-birth,” I said with air quotation marks. “I had epidurals with both my kids. And know what? Ya’ know what? Bof’ of them are in the gifted program! ‘Zactly….the gifted program.”

The angry drunk is usually caused by liquor. Rarely do I encounter an angry drunk and their drink du choix is wine. Going to a public place with angry drunk is miserable because they are just looking for a fight. In a more private setting, if you run out of marshmallows, they’ll lose their shit. There’s nothing fun about angry drunk. Occasionally when angry drunk has gone through their anger cycle they’ll then become whiny little bitches, claiming no one loves them. Angry drunk is the most dangerous of them all.

As mentioned in my intro, V and her man encountered touchy-feely drunk. Touchy-feely drunk (or TFD for short) loves everyone and will tell you this, many times over. Occasionally, the philosopher and touchy-feely drunk fuse together like 2 planets in the universe and you get the best of both worlds. A female TFD is more likely to braid your hair or give you hugs like that creepy relative you avoid. TFD is the most harmless of them all.

Annoying drunk’s volume level will always be 3 octaves above everyone. When you tell them to quiet down, they’ll scream louder just in spite. Annoying drunk is the one most apologized for. If they haven’t spilt their drink on you, themselves or both, then it hasn’t been a good night. Annoying drunk’s drink choice is often times frou-frou drinks, because their “fun”, just like them. They’ll often times make many declarations throughout the night including, but not limited to:

“WE MADE IT BITCHES!”

After we drink, why do we suddenly feel we could win a dance off with Justin Timberlake? At some point, maybe while you were asleep, all dance moves from Just Dance were uploaded into your body. Suddenly, you feel qualified to give dance lessons and no one’s going to stop you.

In our heads, this is how we think we dance:

In reality and upon inspection of the video taken of you, here is really what went down:

I fully accept there are many more types of drunks as well as subsets of each category. What did I miss? Which one are you?