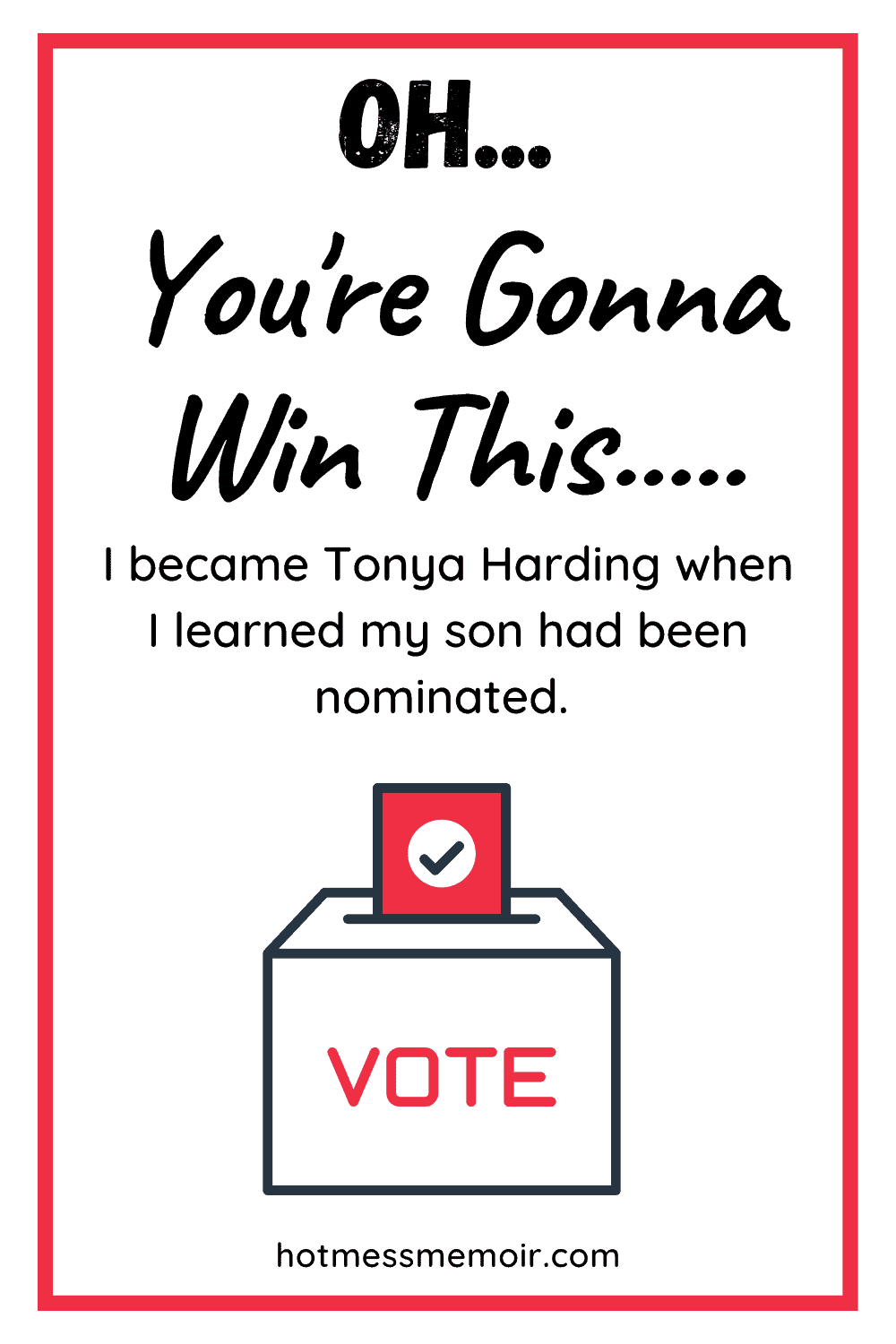 Anyone that knows me, knows that I’m EXTREMELY competitive. When I truly want to win something, I shrug and say, “well, let’s get started”. It’s like I know what I have to do and losing isn’t an option. The apples don’t fall far from the tree because my sons are just like me. If any of us do lose, we’re pissed off for at least an hour and it’s best to keep your distance.

So when I received notice 3 days ago that my oldest was up for athlete of the week for the local newspaper, it was a no-brainer. When there’s a contest that involves my children, and I can have a hand in the outcome, you better damn well bet who will be the winner.

Athlete of the Year

P was up against 2 other kids, one of them being from a rival school. Now, these two could be boy scouts for all I know but to me, I hated them and everyone that voted for them. I envisioned the one that was almost a tie with to be a greedy little troll, sitting under a bridge hitting, “vote”, “vote”, “vote” for himself. Or maybe he was paying for voting bots.

Our home quickly became campaign headquarters while my husband worked downstairs and I worked upstairs now that we’re both remote. Anytime I’d have an idea, I’d lean over the upstairs ledge and yell it down. Anytime he’d have an idea, he’d yell up.

“There’s our athlete of the week!” I yelled out the upstairs front window from our bedroom. My son had just returned from school and looked up super confused. He already thinks I’m bat-shit crazy, so this action was par for the course.

If We Want to Win, We Need a Game Plan

In the course of an afternoon, I managed to post the poll on the following mediums and will everyone to vote the RIGHT way:

Now, this was the annoying part, we were neck and neck with one of the 3 kids and it was pissing me off. It’s like whenever we went up, he’d go up just a few more. My husband was convinced the little ass hole was using voting bots.

“No, he just probably locked himself in his basement and continues to vote for himself. I do feel sorry for the 3rd kid, however.”

This was true. The poor dude didn’t even have like 10 votes in the beginning. A part of me wanted to vote for the underdog until I quickly shook the idea from my greedy brain. Besides, maybe this kid had a tactic to come in with voting bots at the 11th hour and end up with like 70,000 million votes. No, it was every man, or athlete, for themselves.

I won’t say who wanted to use voting bots but someone suggested it. I was adamant about not cheating but I really, really wanted P to win. The idea was quickly shut down when this person realized much of the website was written in Russian and had about the same legitimacy as Michael Jackson being married for love.

Besides, all the parents, friends and families rallied behind my son. We didn’t need stupid bots. My sister was at happy hour, commanding her co-workers to vote for P. A soccer mom told her philanthropy group and her parents to vote for P. We had soccer teams that my sons hadn’t even played on, voting for P.

We Fuckin’ Won….I Meant He Won!

That’s right, we did bitches! Ugh, there I go again. He won, he did it. Despite being down several times yesterday, today my son was up by over a hundred and it felt magnificent! Or at least I heard it felt magnificent for him. I’m just playing it cool here.