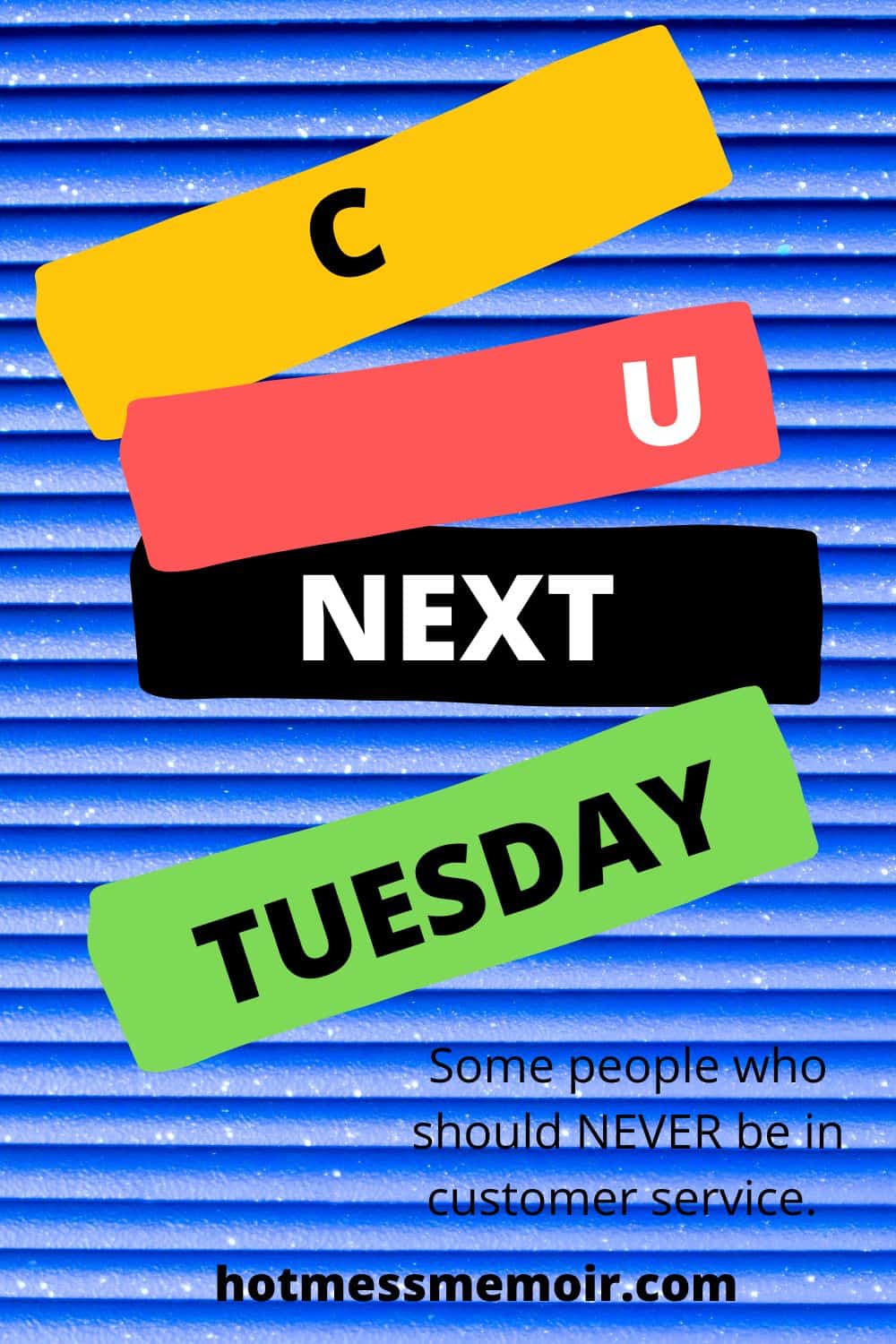 There are some people we come across in life that should NEVER, EVER be in customer service. This includes even if their livelihood depends on it. The woman I’m about to write about is just one of those people.

My teacup chihuahua is about 9 months now and needed her tubes tied. I don’t know if that’s the medical terminology but for now, let’s run with that. I booked her appointment 3 months ago and apparently spay appointments are on par with scoring Hamilton tickets so I couldn’t miss it.

The Friday before the Tuesday appointment, I received a call from a no-nonsense woman from the spay/neuter place. She began to bark out the following orders:

She was curt but regardless, I didn’t think much of it.

Tuesday came and dutifully I arrived at the office at 7:15 a.m. I pulled into the parking lot to see two older women attempting to escort two very large dogs into the office. The first dog dutifully yet hesitantly followed the first woman inside. The other bully mix must have known what was happening and would have made a better door stop. At one point, the short-haired lady must have said fuck it and picked the dog up like an errant child. The dog’s paws shot out in front as if he was superman while he had a dazed look on his face, looking around confused.

My dog is 5.5 pounds and with two dogs like that, there was no way I was taking her in the waiting room with those two big dogs. Harmless I’m sure but I’ve been through three dog attacks in the past year with my previous dog. The PTSD of that makes me question every dog. I could totally see dumb and dumber, eating her as a little snack so I waited outside.

“Tell that woman to come in,” I heard the woman behind the counter tell the man that was on his way out. He did as he was told and I dutifully entered the waiting room. The building was built in the eighties and the waiting room was nothing great; cold really. The front desk was the standard formica and the lighting overhead made you look like death. Over in an alcove were benches that six people sat on.

‘Am I in planned parenthood?’ I asked myself.

The office reminded me of my hometown planned parenthood. And I know you won’t believe me but I wasn’t there for me. My best friend decided to loose her virginity one summer and I was there to support her. I’d hold her hand while she got a pap smear, and birth control. Remind me one day to tell you about the Looney Tune oven mitts they used for the stirups. They made the place seem really official.

I went up to the front desk.

“Hi, I’m here with Lulu,” I said. The woman behind the desk was an older lady, maybe 70. Her silver hair helmet was perfectly coiffed and her makeup was freshly done. We were in the “rich” part of town and clearly she didn’t need the job. I would come to understand that face even more in a few minutes.

“Ok,” she said looking over her readers. “Do you have the vaccination records?”

“Oh gosh, I’m so sorry. I totally forgot them but I can go out to my car and grab’em from my phone. I think it has an email with her records.”

“You’re not going anywhere,” she retorted.

‘Esqueeze me? Come again?’ I thought to myself. Was this like a Stockholm syndrome situation that was playing out?

“You’re staying RIGHT HEREFill out,” she barked handing me a clipboard. “Bring it back to me when you’re done.”

Now I had 2 options, comply with this nasty person or call her a name, turn on my heel and leave. I quickly weighed my options. This appointment had taken months to come to fruition. If I left, it would probably be another two months. This meant my dog would have her period again and that really sucked when it happened last time. Also, I had chosen a place based on the cost and it was 40 minutes from my house. I decided to swallow my pride and stay. I grabbed the clipboard, walked over to an empty bench and began filling out the paperwork.

When the Bitch gets Snotty, I Get Snottier

I filled out the form while mumbling obscenities under my breath. I didn’t care that I sounded like a deranged homeless person, I was pissed. Except for the vaccination form, I filled it all out and walked over to the front desk.

“Now for the vaccination part, do I just guess or are you going to fill it out for me?”

She smirked while glaring at me over her glasses.

“Now how are you going to guess?” She challenged.

That question was my breaking point. I was done being marginally polite to this woman as she clearly didn’t speak the language of civility.

I shifted Lulu to my right hand, leaned my left elbow on the desk and began, “well you see, she was born in December,” I said it really slow to be a real smart ass, “and we got her in January. So I would choose any date between January 1st and July.” Bitch wants to be rude, I can be rude right back.

She just glared at me, almost as if saying, “you think you’re cute, don’t you?”

“Look, all I know is she has every shot she needs.” I continued.

“Well, how do you know that?” She questioned, putting her hands on her hips.

“Well, I took Lulu to the vet,” I said, now placing Lulu in front of me and holding her with both hands, hoisted her up in the air like the Lion King and said, “and I said, give her every shot she needs!”

Now I had an audience because other people were picking up our elevated tones and I got the sense she wasn’t nasty just with me. I even heard a few snickers in the background.

I don’t know if it was defeat or annoyance but after staring at me for what seemed an eternity, she finally said, “go sit in the waiting room until we call your name.” I didn’t let up, I just stared right back into her eyes as two can play this game.

When I walked back to the benches, one of the older women that had the bully dogs from earlier, caught my stare and quietly mouthed,

I wish I could say this ended in a Jerry Springer sort of situation but it didn’t. After they presented Miss Lulu to me with a cone that was heavier then her entire body, I waived my hand like Forrest Gump and yelled,

She looked at me confused over her readers.

After this debacle, I decided to Google some of the reviews. Tonight, I leave you with some of her “glowing” reviews. the hilarious part about all of this is she’s the one that reviews the reviews and responds back. Enjoy!