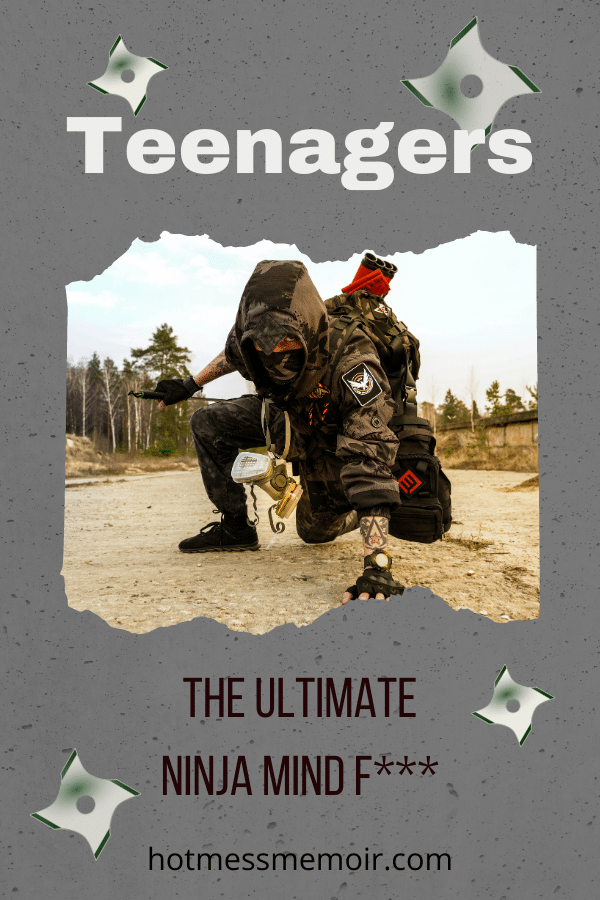 Before I had children I had dreams of doing mother/daughter things with my teen daughters like going to the mall, laughing at the kitchen table with a steaming mug of latte in our hands or sitting on their beds, helping them get through their first traumatic break-up.

“No Angela, because I have a sense of humor and you’ve never done anything in your life that is remotely masculine, I will bestow upon you 2 boys,” God said. He probably didn’t say that exactly but it probably went something like that.

And for years, my sons thought the world of me. There were times I couldn’t piss alone because that meant a door/barrier between us. I couldn’t kiss them enough every day and give them hugs. Sure, they drove me crazy for years but it was the standard stuff kids do.

There’s a permanent dent in my tongue for biting it, each and every day. I swear to God there are times I’m talking to my sons and they say something that is the final straw. In my head, I’m scurrying onto the table and coming across it to take them by the ear and give them a spanking, regardless of age. Then I blink, acknowledge that much of it is hormones talking and proceed with a calm (occasionally laced with sarcasm) response.

And to be clear it’s 80% the 16-year-old right now. The 12-year-old is just the Padawan of the 16-year-old who I can confidently say is Yoda when it comes to teenage assholeness. I am in absolute awe of what comes out of his mouth sometimes or what little appreciation he has for what I do for him.

Example One- The Speeding Ticket

I allowed our 16-year-old to drive to our tournament in Indiana until we got over the Indiana border yesterday. We then pulled into a rest stop, switched seats and were on our way.

“Ok, let’s make up some speed here,” I announced.

“Why do you get to speed and I don’t?” He asked which was a completely fair question.

“Because me getting a ticket versus you getting a ticket with your temps are 2 different things. And besides, I’ve been known to talk my way out of a few tickets in the past,” I said proudly.

“No, it’s because you act stupid when they pull you over.”

Again, biting my tongue and envisioning my hand swiping him in the backseat I pondered my response for a second. He formulated this theory despite never being in the car with me when I’ve been pulled over. He couldn’t possibly conceive that I had the brains and negotiation skills to avoid being ticketed. I mean, how could I possibly be smart enough to know the tactics? In his mind, all I knew how to do was drool when the officer approached my window and announce “me stupid.”

“No Parker,” I said calmly, “it’s because a big part of my job is negotiating and I’ve learned how to do it. Besides, I’ve never had a ticket and that is a huge factor when the officer determines whether or not to ticket me.”

Once we arrived in Indianapolis we were starving and decided on Chick-fil-a for lunch. I used to get a grilled chicken sandwich on a buttered bun and pickles. Unfortunately now, they stuck the grilled chicken sandwich on some multi-grain bun and added tomato and lettuce. To get my chicken the way I want it, I went up to the counter and ordered what I thought was an idiot-proof ask.

“Hi, may I please have combo number one but instead of the breaded chicken, I would like grilled chicken?”

She looked at me as if I had asked her to explain Chick-fil-a’s business model.

“So you want combo five?” She asked, pointing to the multi-grain bun, grilled chicken, tomato and lettuce picture.

“No, I only want the buttered bun and pickle so that is why I need to order combo number one but replace the breaded chicken with a grilled chicken.”

She stared at me for a second which was fine. Probably still computing it then she slowly shook her head, punched a few buttons and that was that.

Ten minutes later we had our bag of food. I dropped it to the ground and scavaged to find my sandwich. I opened it to find a multi-grain bun, grilled chicken, tomato and lettuce. Had McDonald’s not fucked up our order three times just three hours before, I wouldn’t have felt the rage that I felt.

Gritting my teeth, attempting to stay as composed as possible, I flagged a woman down I believed to be the manager.

“Hi, I asked for combo number one but instead of breaded chicken, I want grilled.”

“So you want combo five?” She asked.

How were these people struggling with what I was asking for? Did I need an excel spreadsheet on my phone, make two columns and type out the differences between the two sandwiches? And having zero ability to read the situation, my 16-year-old decided to chime in.

This is when I was at the precipice of either going to my son’s tournament this weekend or pleading guilty in an Indiana court of law to child abuse.

“Just stop talking,” was the only non-offensive thing that I found in my arsenal of responses to him because I was beyond done.

So there it is. Like many of my posts, literally no point other than to vent, make you laugh or both.