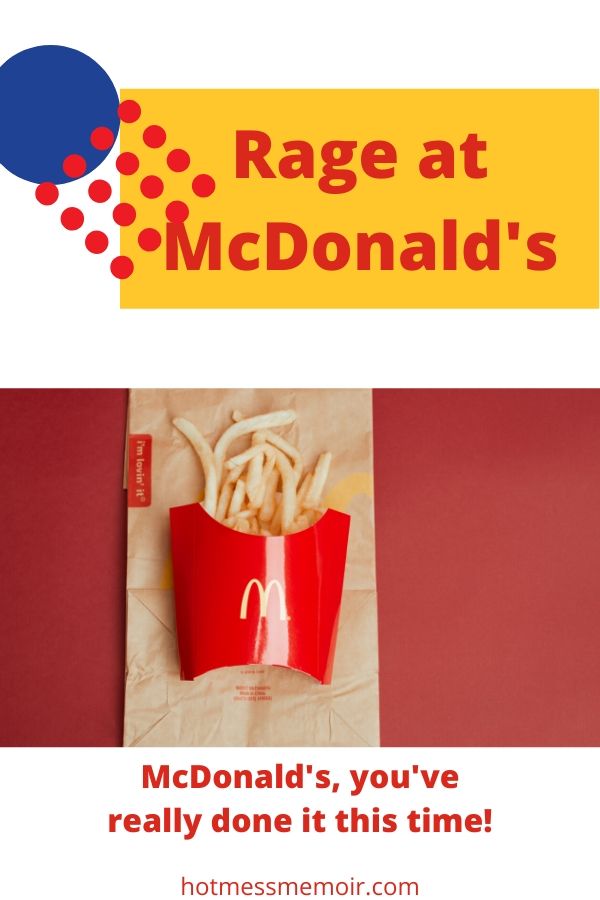 Look, I’m not an idiot when it comes to fast food. Not everyone working in this industry is a graduate of Stanford or has the IQ of a genius. I fully accept all of this. What I don’t accept is when I have a shitty experience, my time is wasted and the manager doesn’t give two shits.

My son had his best friend over last night for a sleepover. This kid is so well-behaved that words can’t describe what a pleasure he is to have over. This morning, I had zero intentions of cooking breakfast for them. It was either McDonald’s or Starbucks and I hid my crossed fingers behind my back, praying they would choose Starbucks. They chose McDonald’s.

I absolutely hate the McDonald’s that is closest to us. If you don’t have at least a solid 30 minutes to wait in the drive-thru or inside, you simply can’t go. Today was going to be different though as Smarty McSmart Pants (aka me) decided to download the app and preorder, so our piping hot hashbrowns would be ready the minute I walked in. We live about a mile away so at about the half-mile mark, I was going to hit the “go” button that would indicate to McDonald’s to start making our food.

At the half-mile mark, I hit go and received a message stating “it doesn’t look like your there yet, please try again when you’re closer.” What’s the purpose of this app if you have to wait till you’re there to have the food made? I pre-order Wendy’s about a mile away and never have an issue. At a quarter-mile away I tried again, only to receive the same message. Now in the McDonald’s parking lot, it was the same message. Even inside the restaurant, the message never changed. My location was turned on so that obviously wasn’t the problem.

The app showed I had ordered and even listed what it was. After a sheepish teen boy attempted to retrieve it from the register, he came up with nothing and requested the assistance of a manager, sitting at a booth. I rolled my eyes, flustered that this is what it had come to.

A petite gentleman, probably in his mid-twenties, was wearing a pink gingham dress shirt and grey pants. His dark hair sparkled with the overuse of hair gel and seemed better dressed for a night out at Applebees. Something caught my eye though and I looked down to see his belt buckle. On it was the Jaguar car symbol gracing the top of the silver buckle. I didn’t know that a Jaguar belt was the de rigueur of McDonald’s uniform.

After several unsuccessful attempts at retrieving my order he explained that he could cancel my order and I could pay again. This was the point in time I realized I didn’t bring my purse.

“I didn’t bring my purse because I already paid,” I announced.

“I cancel order, you pay again,” he repeated in an Eastern European accent.

“You have Apple pay or pay on Samsung pay? No?”

“No, I don’t,” I responded, instantly regretting not getting around to adding the feature. “Besides, I already paid. I’m not going to pay twice.”

“It’s simple, I can cancel the payment and you can pay again.”

He clearly wasn’t getting it and I was beyond frustrated. I could tell I must have interrupted his break or something based on his eyes flickering over my shoulder, longing for the booth he had just sat in a few minutes ago.

I pursed my lips and laid my hands on the wrap desk.

“What do I have to do to get my food?” I asked, clipping each syllable. I wanted to be blunt and simple so he could understand what I was trying to achieve.

“You pay and then we make your food.”

“I already paid!” I said annoyed. “Here, I’ll check my bank account,” I tapped a few things and to my disbelief, McDonald’s hadn’t charged me. Clearly, according to the app, the order had gone through and I even had an order number but it had not charged me.

“So basically, I have to drive home and get my purse?”

God forbid this ass hole eat the $15.21 that my order came to and have my food made. I left there slamming doors and driving like a bat out of hell. I text my friends, husband and oldest son that I would indeed make bringing McDonald’s down, my primary activity for the day.

As I pulled into my driveway, I kept the car running. I ran inside and raged in front of my family and my son’s friend for a solid two minutes, explaining everything that had happened. All of them instinctively knew to keep quiet and let the meltdown play out.

“And I swear to God,” I said, pointing my finger in the air, “had I not signed up to get all of you McDonald’s, if it were just me, I can absolutely guarantee they would not receive another dime of my money!” I declared as I marched out and slammed the door. I doubt my son’s friend will ever want to come back given the crazy lady that resides there. s

Back at McDonald’s, Jaguar was nowhere to be seen. You could tell the two teen boys that had watched the situation unfold earlier felt bad.

“Hey, not your fault,” I said sincerely. “By the way, what’s that manager’s name?”

With a twinkle in his eye, the second teen piped up, “Neil”.

“Well ok!” I responded winking. We both had an understanding of where this was going to go for Neil.

36 minutes later (mind you, I live 1 mile from this McDonald’s) I was back at home with piping hot hash browns. My family was very appreciative of what I had gone through for the food that would surely hit the shitter twenty minutes later.