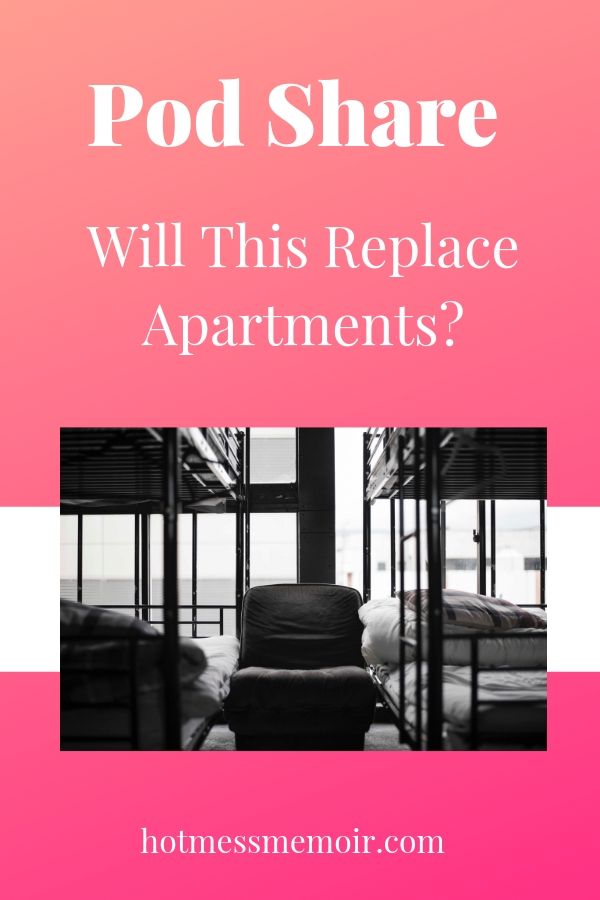 I went down the rabbit hole of the internet today, searching for news about the 7.1 earthquake in California. I think I was on CNN.com when I came across an article about pod sharing and a new-ish company that created podshare.com. You can stay for a day or for months. The pod (basically a tricked out bunk bed) is yours, however, everything else is shared. I’m always fascinated about living spaces, especially small, unique ones so I was sucked in and all I’m left with are questions. Nay, more like concerns.

As many of you suffer through 8 hour work days in cubicles with oblivious, annoying people, imagine actually living with them. I strongly believe that the people who invented and are proponents of cubicles, never really have had to work in a cubicle, long-term. There are times I can’t hear myself think in my cubicle and forced to put earplugs in with white noise.

In the early 2000’s, I had my first taste of “communal” on a business trip to San Francisco. My mother came along for the trip and we stayed at The Cliff in downtown. We went to the hotel restaurant to find communal tables. Basically, it was long bar like tables and we would be sat with complete strangers. I didn’t want to socialize with complete strangers however being the lady that I am, I made small talk. I vowed 48 minutes later to never be put in that situation again.

I’ve been reading that experts (whoever that may be) think that millenials want more of a social, personalized experience when traveling. For example, Hilton started a hotel recently called Tru by Hilton a.k.a, my worst nightmare. Rooms are around 275 square feet, there are games and craft beer in the lobby and lastly, no coffee makers in the rooms. This is done on purpose to force people out of their rooms to socialize. You know what? Maybe they don’t want to socialize. What are we? 5-years-old and wanting to make friends? So if you’re alone on a business trip (a situation I found myself in once a month for several years in my late twenties, early thirties), Hilton thinks I want to go down to the lobby (by myself) and just strike up a conversation with a stranger. I don’t think so Linda.

Ok, ok. they say that there is a screening process before and after you stay and there are rules. Despite all of this, here are all the worst case scenarios that went through my head and should go through anyone’s head when thinking about staying at one of these:

Like cubicles, I just don’t think it’s a good idea. We all need privacy to feel safe and to decompress from the day. We all recharge our batteries differently and my way is being alone. What do you guys think? Are pods a good idea? Would you live in a pod? Or maybe just for a night?