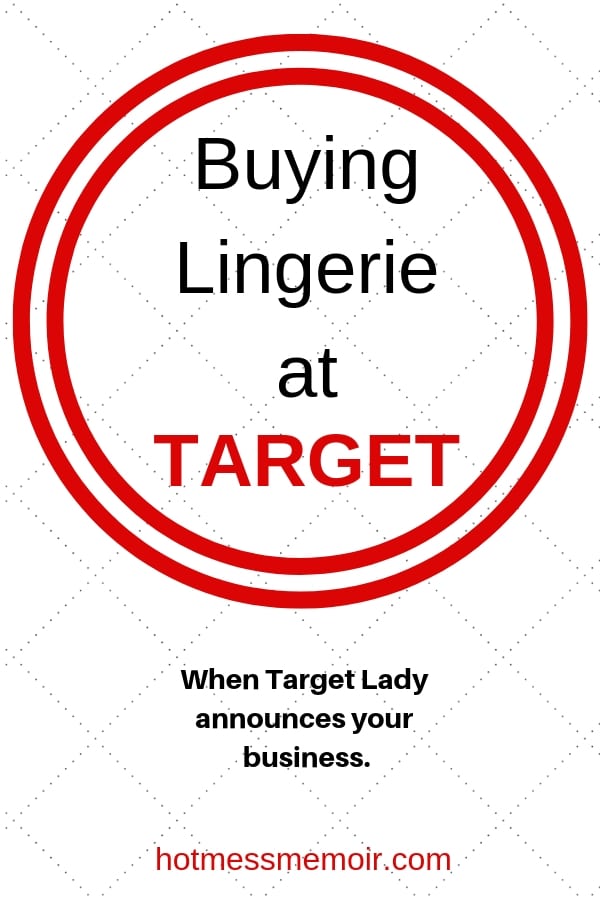 In my twenties while working for LBrands (they own Victoria Secret) I would only buy Victoria Secret lingerie and underwear. I had a hefty 40% discount making the $29 thongs just $17.40. Totally practical right?

Now that I’m 42, I finally see how idiotic it is to pay $17.40 for 3 strings held together by a scrap of fabric. My shopping philosophy these days is this: if I can’t buy it online or on the main drag of the suburb I pass during my commute, it ain’t happenin’. That means my lingerie options are either Target, Wal-Mart, Kohl’s and Marshalls. Since I hate Kohl’s about as much as I hate Wal-Mart, Marshalls and Target are my only options.

So for Valentines Day, I needed some new linger-ray (that’s my husband’s and my funny way of saying lingerie). Oh, and we needed wine.

I walked into Target, grabbed a tote and headed to the underwear section. At first I thought I was fucked as I was only finding jersey or cotton fabrics. As I moved deeper into the section, I came across a rack of silky black options.

Here’s what each thought as I flipped through each selection:

How’s my ass gonna fit in that thong?

(flipping back to last option)

Best thing is it was all on clearance, like $10 each. Since they attached the thong to the neck of each nightgown via a plastic, price-tag fastener, trying them on wasn’t an option. For a second I thought maybe I could somehow put the thong on my head so I could just see how the gown fit. I thought better though as I would probably strangle myself on accident. I put 2 in my basket, along with a black, silky robe and headed over to the wine section.

It might sound silly but I didn’t want to check-out with a male attendant. Unfortunately, the only wrap desk not being manned by a guy was self-checkout. Later, I would learn this too was awkward option as self-checkout is more of a community event.

I walked over to 1 of 6 self check-out, scanned the robe and put it in my bag. When I scanned the first nightgown, I received the following message:

I scanned it again and received the same message.

“Daddy, that dress is pretty,” I heard a little girl whisper to her father, referencing my nightgown/ thong combination. He was busy scanning a dozen roses. He glanced over to see what his daughter was referring to, reddened and turned back around quickly. I attempted to lower my nightgown as I was about to ask for assistance and that’s how she saw it. I motioned for the attendant.

A petite, older woman came over. She looked at the wine then the nightgown, then back at me. Her next move was to let her inside voice out.

She smiled, took the nightgown, punched a few numbers into the register, scanned the nightgown again and received the same message. By now, a manager came into the self-checkout area. Target lady walked the nightgown over to her manager who then produced a handheld scanner, punched something in and announced “$10.66.”

“$10.66?” Target lady repeated in astonishment, while holding the sexy little number up in the air, thong bouncing left and right. She turned it around so she could inspect the back, “I’m a ’bout to get me 2 of these!”

By now, I just stood there like a woman who had the last bit of dignity ripped from her. I was the Target lady’s bitch and I was going to have to just let this play out.

So that was my pre-Valentine. I hope all of you had an enjoyable, dignified Valentine’s Day!