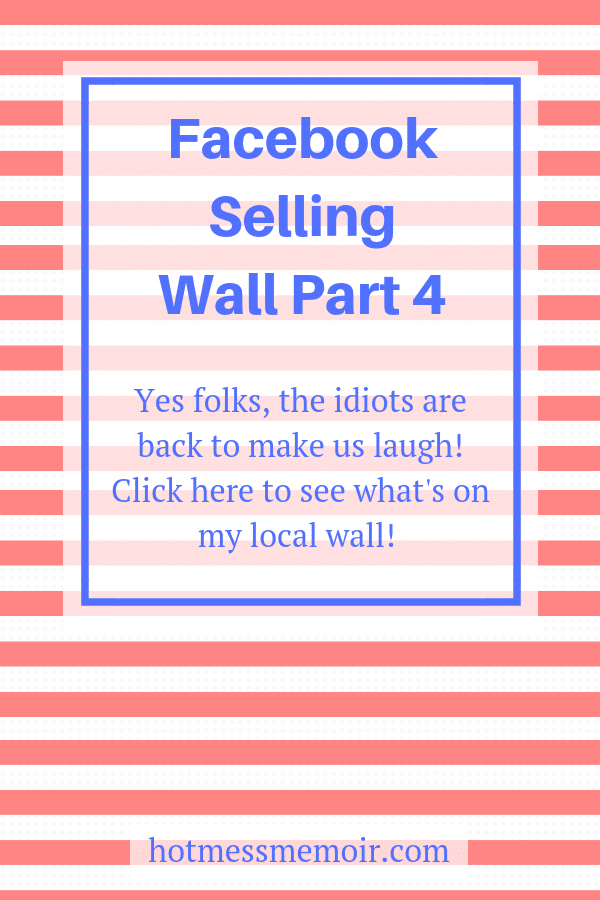 I haven’t done one of these posts in a while and I have no idea why. I love doing these because I laugh the entire time while typing. If you haven’t checked out my last Facebook Selling Wall posts, what are you waiting for? Check them out here!

So lovelies, I present to you Facebook Selling Wall Part 4! 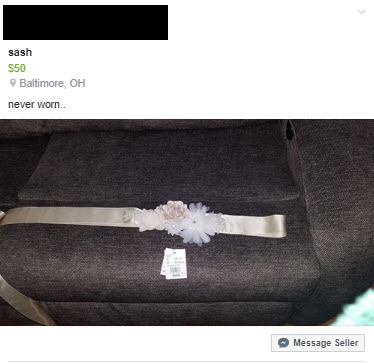 First of all, is this 1955? No, it’s not. Second, how are you going to charge $50 for something I could make for you for probably $5? When I think Facebook, I’m totally thinking it’s definitely a place I could look, find and buy a sash. I know I was about to enter Miss Wine so I’m really glad now I found this sash for my beauty pageant. Do these people think they are going to sell this thing? Well yes, I guess. But it will never happen. 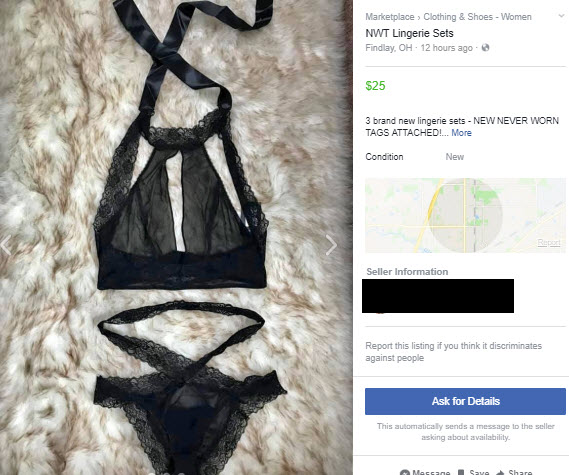 Need lingerie? I love that they used a fur blanket or rug as a backdrop for the lingerie. Do you think they could have taken the extra step and maybe given us a size. I mean, if I had to guess, this is maybe fun-size? I know I’m probably not getting a thigh in that thing, that’s fo’ sure. Perhaps this could be better suited to an arm pressure cuff? Yes? 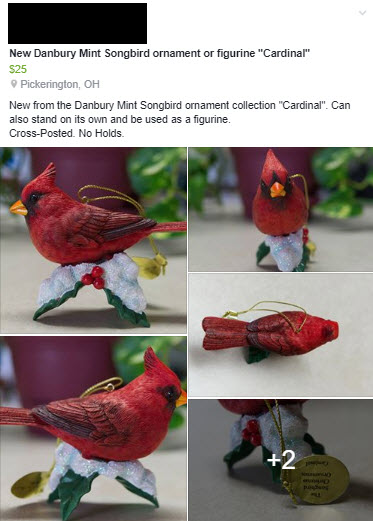 First of all, no one is buying this stupid cardinal. Second, no one is buying it approximately 22 days after Christmas and at a cost of $25. Is it made of gold or something? Additionally, when I took a screen shot of this thing it said they posted this an hour before so it’s not like they attempted to sell this thing before Christmas. Just a stupid offering at a stupid time.

I couldn’t resist adding my own notes on the screen shot. I have nothing else to say but that these are some really lazy fucks that found cleaning it too much of a challenge. 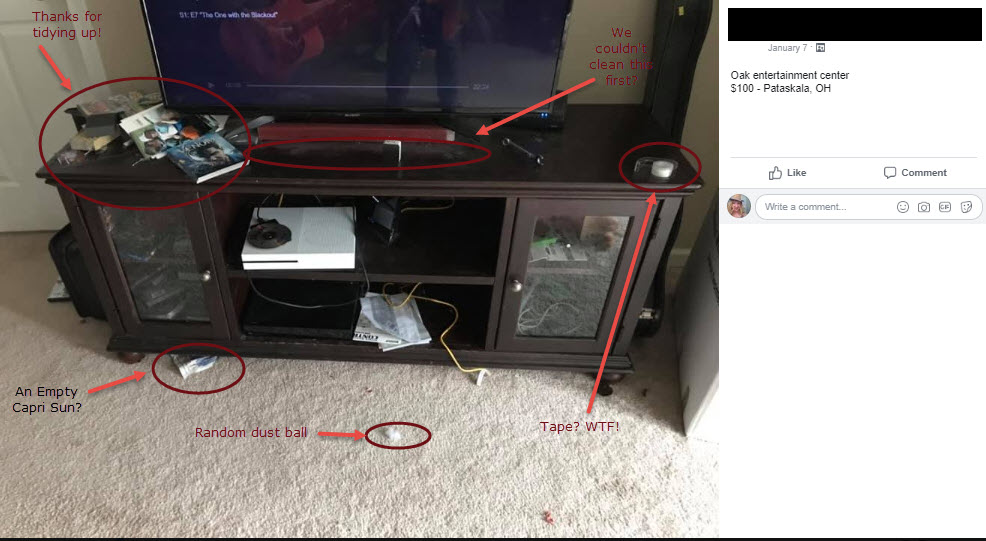 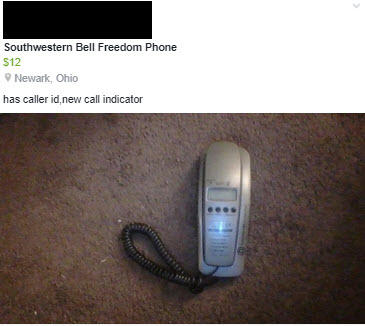 What’s a call indicator? Are they referring to the phone’s capability to ring? This thing isn’t worth a nickel. Why would you waste your time? First of all, we all know you didn’t buy this for $12. 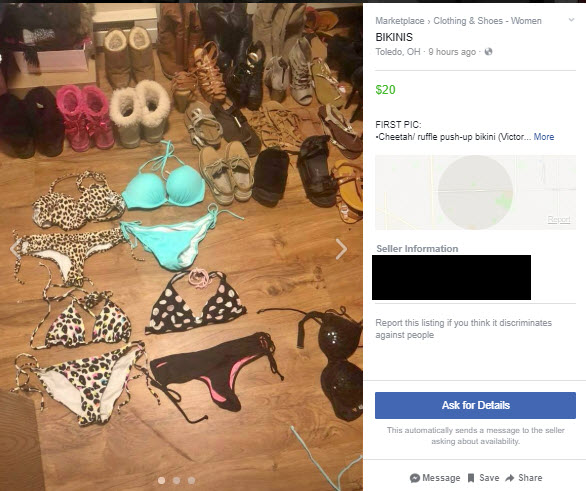 First let me say, bravo for picking the coldest month to sell your used bikinis. I love that you got creative with the photo by pairing bikinis and Uggs. I’m sure you’re just giving snow bunnies ideas on what to pair these with.

Now let me say this. I feel dirty trying on new bathing suits in stores. Not because of the poorly lit rooms but because despite the bottoms having 1 thin strip shielding your lady parts from the fabric of the bikini, you know damn well some knuckle dragger took her underwear off to try the bikini on. I approach that area of even new suits with severe caution so for this woman to sell her used bikinis (2 of which seem to be a thong) is an oblivious act and her Facebook account should be shut down.

Saved the Best for Last

And I saved the best for last, loves. This one is courtesy of my friend N. She’s responsible for many of the pics you see here on Hot Mess Memoir and/or videos. She’s even in some of them! Anyway, here is the listing…. 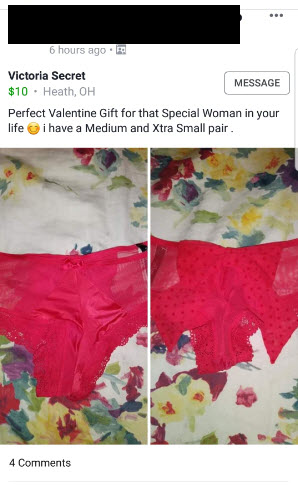 And now the communication between the buyer and 1 seller….. 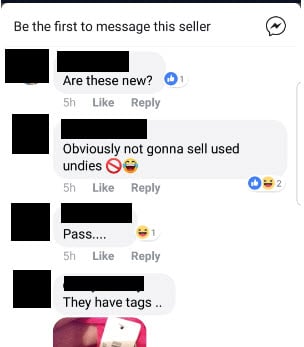 You know this perv was going to ball this shit up and put it in his pocket, only to take it out during each piss break and smell them. Though I would recommend to Facebook to ban selling stupid things such as underwear, I will never recommend it because we always get a good laugh!

Scour your local Facebook selling wall! If you don’t belong to any, please sign up! The idiots will never make you regret it!