You Don’t Have Crushed Tomatoes? 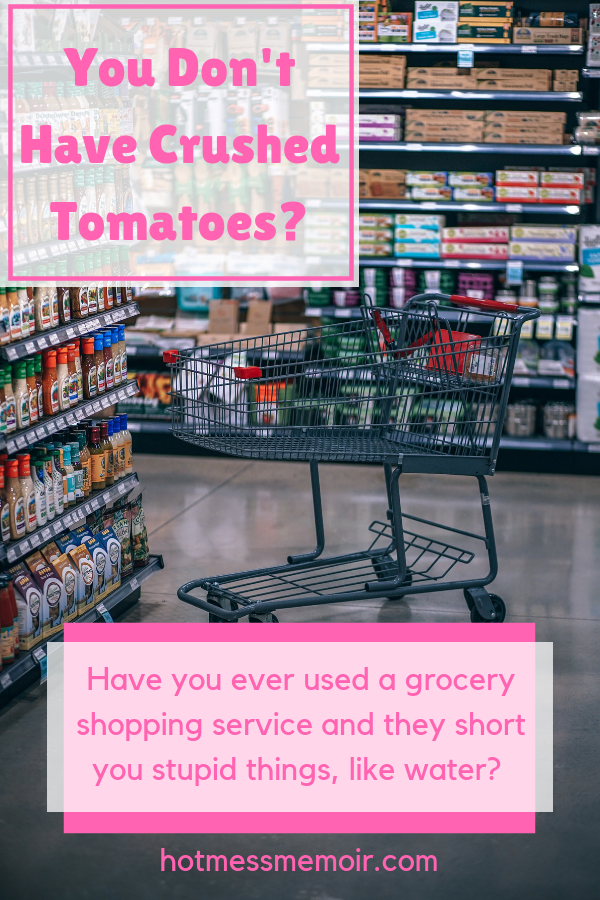 I grocery shop either on Saturday or Sunday. When we are gone for long weekends because of soccer, I use a service offered by our grocery store Kroger, called Click List. For $4.95 you order your groceries online, pull into the parking lot and they load them into your car. It’s pretty cool in theory however there have been some hiccups over the past year I’ve been using it.

I am baffled by some of the things they “don’t have”. In some cases, I’ve made the teen reading off the missing items march back into the grocery store and not to come out until they find a substitute. Miraculously, this has been 100% effective. I don’t know if they just don’t want to look for it but here is a conversation I had with them this Fall. This takes place while I’m sitting in my car and the teen is reading off my shortages.

“We shorted you on your deli ham. There weren’t substitutions.”

“Come again? You don’t have black forest, honey, sugar ham or anything?”

“Yeessss,” a now nervous teen says, looking around for the support that wasn’t there.

“We also shorted you crushed tomatoes.”

“Wait what? That’s like the most common thing on Earth.” I say, now horribly frustrated.

After they loaded my groceries, I move my car back to a regular parking spot, walk in and hit the deli counter. And you know what? They have every type of ham you could ever want. It’s a miracle! I explain my frustration to the deli counter. She then informs me that she’s seen this before and it’s because some of the shoppers just don’t want to wait.

Next, I head over to the canned vegetable aisle were I come across 3 different types of crushed tomatoes. I select the only brand that had the size I needed which happens to be organic.

I go to customer service and plop the bag of ham and the can of crushed tomatoes on the counter.

“I would like my $4.95 refunded as your Click List team said you had no substitutions and clearly,” I nod my head down to the products, “ya do.”

We will call the stupified 20-something on the other side of the counter Zion, because he looks like the type that would be named Zion. His brown, curly hair is in bad need of a cut along with a beard trim. His silver rim glasses make his eyes look huge and he probably weighs the same as my left leg.

“So you wanted organic tomatoes and we didn’t have them but we actually did?”

“No, I don’t care if lead is sprayed on my vegetables, it doesn’t need to be organic. Online, I said I’m ok with substitutes but they just didn’t give me a substitute.”

“So you didn’t want organic but they gave you organic and you want to return it for non-organic?”

Jesus. How was this person not only hired but allowed to work with the public? Why couldn’t Zion wrap his head around what was happening here?

“No, no, no. You aren’t getting it,” I said, trying to keep my frustration in check. “I asked for Kroger brand crushed tomatoes and checked the box that said substitutions are ok. When they loaded my car, they said they were out of every single type of crushed tomatos. Same thing for the ham. I want my $4.95 back because I had to come in here and get what your co-workers couldn’t find.”

I could tell smarty McSmarty was still processing the facts but also wanted the conversation to be over. He refunded the $4.95 and rang me up for my crushed tomatoes and ham.

Since then I’ve had a few situations such as the above with the following items:

I’ll continue to use the service and only pray the above doesn’t happen again. It sucks when the above happens but the service is perfect for on the go families like ours.