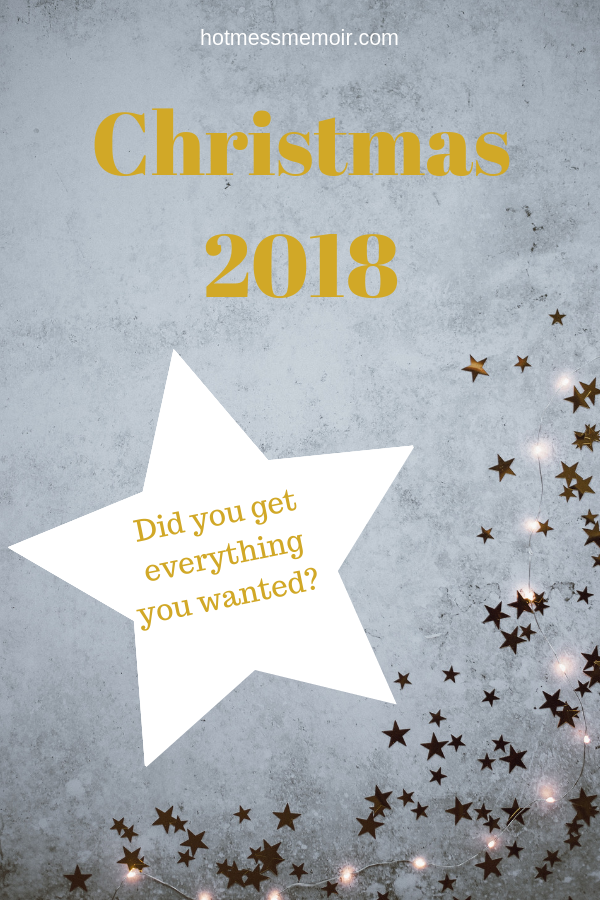 Merry Christmas everyone! I’ve finally taken a break from my sweatshop to do what I love most and that is to write. I haven’t done anything with my blog, reading other blogs, working on social media and I feel like a complete ass hole because of that.

Christmas began with me waking up on the sofa at 4 am to my sister letting her 2 dogs out to piss and for breakfast. S and her boyfriend were staying over and were our first guests in our newly remodeled basement. They got to sleep on the Ikea sofa bed that has the softness of a stainless steel table. I had passed out on the sofa after playing Cards Against Humanity the night before (nothing says the holidays like Cards Against Humanity) with our 13-year-old. This required a lot of wine, especially when cards like “flesh light” and “making the penises kiss” came up. Truth be told, not our finest parenting hour.

At 7:30 am, I awoke to my 10-year-old bouncing up and down as if he had snorted smarties 5 minutes before. Knowing how excited he was, I got up and promised we would open gifts as soon as I made coffee for everyone. After about 20 minutes we began to open gifts.

We got these kids so much shit. I mean, we’re talking Beats by Dre, Apple Airpods, clothing, a game chair and really anything their little hearts desired. Without the 13-year-old attitude taking a break for the holiday, Parker decided to inform me that the visor I had bought him on Amazon would not do as it did not contain the Nike swoosh. Despite envisioning me coming across the living room, grabbing the visor and beating him over the head with it, I calmly informed him he does not need the Nike swoosh but if it’s that important to him, we will exchange it.

“I sent you the link to the visor. All you had to do was buy it there. But no, you probably bought it off Amazon because it was cheaper.”

Now I really, really, really wanted to hit him over the head with the visor. Who the fuck wears sun visors anymore other than aging, white women playing tennis.

After the presents, we sat down to an amazing breakfast casserole my mother-in-law brought. She is an amazing cook and has taught me everything I know about cooking.

“Has anyone seen my phone?” She inquired. We all began to look around the sea of wrapping paper and gifts.

“I’ll call it,” my sister-in-law said. This unfortunately did not turn up the missing phone.

“You didn’t leave it in your bra did you?” Parker asked.

We all simultaneously looked at my MIL who had that now I remember where I left it look. She put her hand in her bra and pulled out her phone. Her bra doesn’t just offer boob support, it also serves as her coin purse, wallet, tissue and electronic holder. I wouldn’t be surprised if she didn’t find a way to charger her phone from her bra.

We opened all of our gifts and headed to my in-laws for what I like to call the second Christmas. Once the presents were opened, Carter decided to go outside to fly his new toy helicopter. Moments later my sister-in-law belted out with laughter.

“It flew onto the roof!” She exploded.

I threw my coat on, grabbed a broom and headed outside. Obviously I misjudged the distance as I was off by about 5′. I went back in, headed to their garage and grabbed a ladder. I was going to break my neck on Christmas. I think my rescue was pretty damn successful and I didn’t even fall off the ladder. Click on this link to watch my dangerous rescue!IMG_03521

All in all it was a good day. Everyone seemed to get what they wanted. I am getting money for a new laptop which I’ve decided will be the Lenovo Yoga 720 because it seems like it will be an amazing laptop for blogging and vlogging. Unfortunately, I spent so much money on everyone at Christmas, I am in no way close to the $600 I need to come up with to add to my Christmas money. Oh well, perhaps I can reopen the sweatshop again.