Everything Breaks and Goes Wrong At Christmas 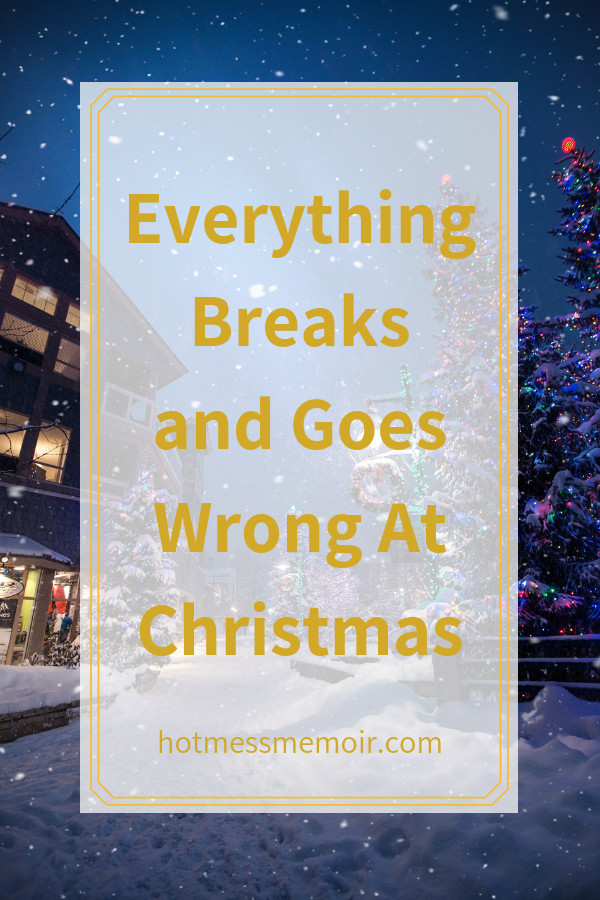 Is it just me or does every fuckin’ think go wrong or break at Christmas? Perhaps you’re a lucky one and December leaves you with nothing but promotions and a new Lexus with a red bow atop (which I don’t think those ass holes really exist). No, I’m confident it’s not just me. It just can’t be. Perhaps this is how God tests our patients.

In my early twenties, I had a beautiful black mustang that I couldn’t afford. On Thanksgiving I woke up to find it had been repossessed since I hadn’t paid on it. Ok, perhaps that was my own doing but still. They couldn’t have waited till after Christmas?

About 4 year ago, I had a dream job that I absolutely loved. 6 weeks before Christmas and after almost 2 years of employment, I was let go because I wasn’t “a good fit”. My doosh-ass boss’s reasoning for not waiting till after Christmas? He’d feel really “bad” seeing me each day and knowing what was coming. Well then, we can’t have you felling “bad”.

Just this past week, my coffee maker of 1.5 years decided, “peace out bitch, I’m done workin’ for you” and died. I wrote about it here. I will say that was 1 super good thing that happened from the coffee machine fiasco is Mr. Coffee responded to my post via Facebook and is sending me a new coffee machine! Ok, that was a super good piece of news.

Before coffeegate, a bill from years ago (that I’ve avoided like the plague) caught up with me last week. The collection agency subpoenaed my bank account in an attempt to garnish my account. Essentially, they could take whatever they wanted till the $1,200 was paid off. I consulted a lawyer and was told to call them. The anxiety was overwhelming to the point it has affected my health. Remember when my period was an ass hole and my doctor fooled me into thinking I was pregnant? I was confident that was directly related to this anxiety.

And It’s Not Just Me

It’s like many of us were born above an ancient Indian burial ground. Take my friend for instance. Not only did both of her kids catch lice from their daycare but just days later, some jack ass punched a hole in her mini van, stole her purse then proceeded to buy over $2k in gift cards at the grocery store. There’s a video of the dumb fuck using her card. Mr. Fubu, if you are going to use someone’s stolen credit card and buy $2k worth of gift cards, maybe put on a pair of khakis and not your finest sweat pant. Oh, and maybe spread out your purchases to 5 different stores as opposed to just 1 store.

I just don’t understand why it all happens at Christmas. No, actually I do kinda understand. It drives home my saying that if irony had a job, it would be a comedian. All of this is ironic. Why doesn’t this shit happen in February when nothing’s really going on? Why not August?

I guess I just wrote this to show you guys that you’re not the only ones dealing with shitty issues. I have shitty issues and even the most “perfect” person bragging about their best live on Facebook at this time, they’re usually the worst off.