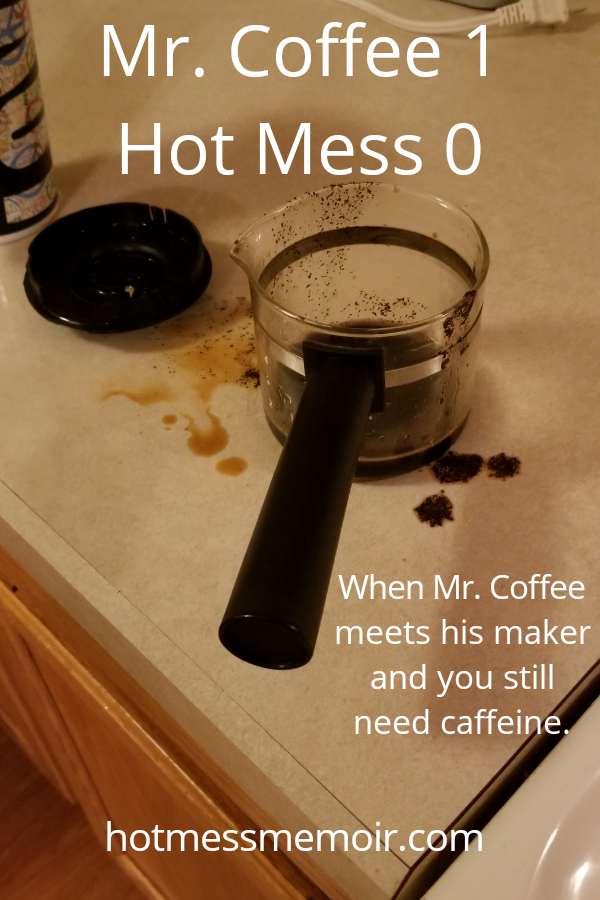 About every Mother’s day (that’s Sunday, May 12th gentlemen. Don’t worry, you didn’t miss calling your mom), Mr. Coffee decides it’s a good time to die. I don’t know what it is around Mother’s day, perhaps he didn’t have a good relationship with his mother? I don’t know.

So to my delight, Mother’s day came and went this year and he still worked. I think it had a lot to do with me actually cleaning it more than I usually would by letting white vinegar brew through 2 cycles, which if you’ve never inhaled steamed white vinegar, it will definitely clear any nasal congestion. Last week, it started to brew less and less espresso so I went through my normal cleaning ritual.

Yesterday, I decided to boil water and pour it in:

I’ve decided that my relationship with Mr. Coffee is toxic and like a bad relationship, even abusive. I keep thinking if I do things differently, he’ll change. But he doesn’t. Today my oldest found me crouched down on my knees almost in a prayer position pleading,

“Come on coffee, don’t do this to me now. You gotta work.”

Even the slightest new sound from Mr. Coffee would cause me to pause while holding my breath to see those magical drips come out.

This is when the abuse kicks in. I remove the little glass coffee pot so it’s not in therapy for the next 10 years and begin to bang Mr. Coffee on each side like a cave woman. Something has to break up the calcium deposits. When that doesn’t work, I slam it fiercely on the top of the head.

“This doesn’t concern you son,” I say as I turn back to Mr. Coffee.

When I realize the abuse isn’t turning Mr. Coffee into the obedient spouse I commanded him to be a year and a half ago, I decide to use the powers of the mind.

I turn back to my son and throw my finger in the air.

“I’ve got it! It just needs hot water!” I announce.

I run Parker to the bus stop, fly back and boil water in the microwave. I then remove the little brew basket and over my cup, pour the hot water over the basket. A few drips come out. When I get frustrated I pour so much, it overflows. Now I have coffee grounds in my coffee. No matter though, I’m sure I won’t taste them when I pour in the frothy milk. You can see to the left, the mess I’m left with.

I did go on You Tube to try to teach myself how to take Mr. Coffee apart and fix him. But the dude took off like 75 parts and he lost me after the first 8. I would end up electrocuting myself if I did what he did.

So I think I have to face facts that I need a new Mr. Coffee and when I do get a new one, I’m only filling it with filtered water. Then maybe I can get past 2 Mother’s days.