Life With a Teenage Boy 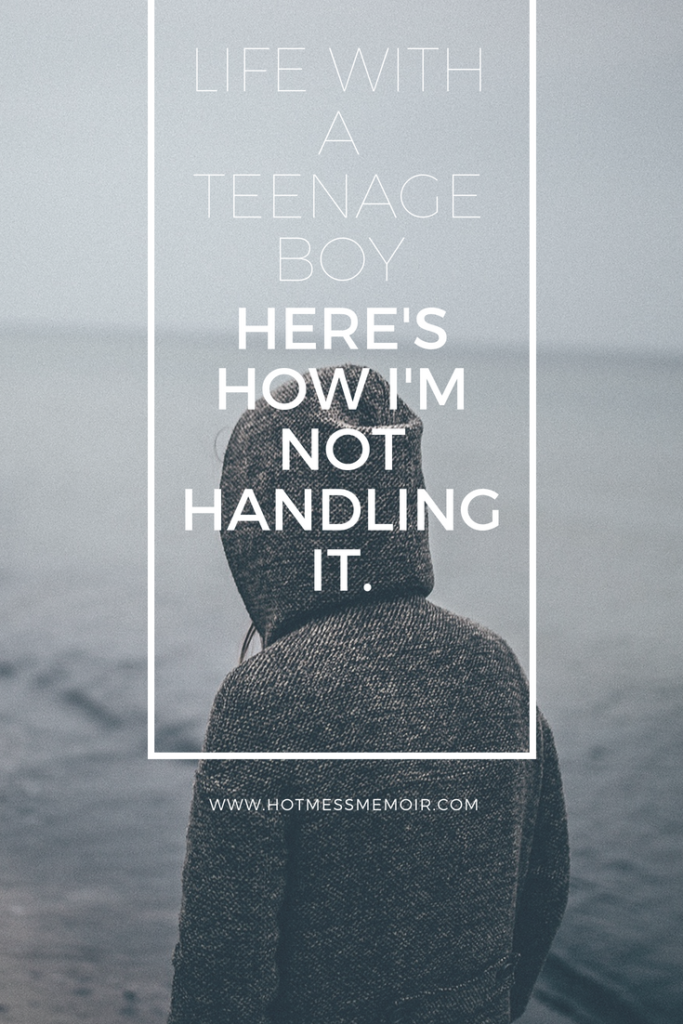 When my children were babies and/or toddlers, many experienced mothers said, enjoy this time, you’ll miss it. I wanted to punch them in the throats as they walked away with their teenage boy while I was left chasing down a 4-year-old while simultaneously changing the diaper of an 18 month old.

‘Enjoy this time? Obviously you don’t remember this shit,’ I grumbled to myself while wiping baby poo off my hand.

Fast forward to today and I’m like “Ohhhhh……now I get it. The teenage years blow!”

In my son’s eyes every single thing I do is wrong. Wrong, wrong, wrong. But it’s not just wrong, it’s embarrassing to him. I mean, you would think I am a babbling, buffoon of idiocy, walking around. You want an example? Here’s an example.

So we are driving home last weekend and these 2 young girls are walking an itty-bitty Chihuahua in front of our house. Like you couldn’t even deal with the cuteness of this little nugget. I had to pet it. It was calling my name.

“Must pet chihuahua,” I said in a robot voice.

“Dude, I’m literally getting out to pet the stupid dog. Give me a break.”

As I get out, Parker’s next move is to crouch down in the hot car and wait it out, while I pet the dog. I was in complete disbelief that me petting a chihuahua was on par to flashing the neighbors my tits.

In the past 4 days, I’ve played (and I’m not exaggerating this number) no less than 10 rounds of Settlers of Catan. It’s a fun game and I highly recommend it. Why am I playing it so much? Because Parker really enjoys it and anything I can still do with him one-on-one is a blessing.

Everything was hummin’ along nicely until he began to read deeper into the rules and watch YouTube videos of supposed Settlers of Catan experts or as I like to call them, nerds.

As I played with him and my 9-year-old, Carter, I about lost my shit. I didn’t…but almost. Here is the conversation from yesterday’s game:

“Ok, I’m going to turn in the wheat, the ore, sheep and brick for a settlement,” I announce.

“That’s what the experts call a newb move,” Parker said under his breath.

I took a deep breath, politely grinned and calmly said the following,

“Look, this is just a game. I don’t care what the so-called experts of The Settlers of Catan say and what they deem a newb move. I’m not here to win it all. Ok? I’m not going to enter some world-wide competition for The Settlers of Catan and neither are you. Your making this game not fun right now. Do you understand me?”

He shook his head up and down slowly, not breaking eye contact with me.

“So I suggest you chill out and keep the comments to yourself,” I finished.

About 10 more minutes into the game, I broke the rules by allowing Carter to pick an extra card. Parker leaned back in his chair, pinched the bridge of his nose as if he had a headache and said in a smug voice,

“You guys are emotionally draining,”

I giggled at the audacity of this comment. Like it was a pure, full-on crazy laugh. I couldn’t believe this teenager had the balls to say that we were emotionally draining. It took everything in me not to flip the board over and scream, “listen you little shit, I’ve played this game 10 fucking times now and have a million and one things to do around this God forsaken house. Being the rule nazi you are, I’ve put up with all the additional rules those YouTube nerds suggested. And side note, you keep following those ass holes, you and your pocket protector can plan on Saturday nights in our basement, as a 30-year-old.”

Instead, I said the following, “I’m sorry you feel that way, we will have to agree to disagree on this matter.”

Teenagers, am I right?