The Winter Storm and Wal-Mart 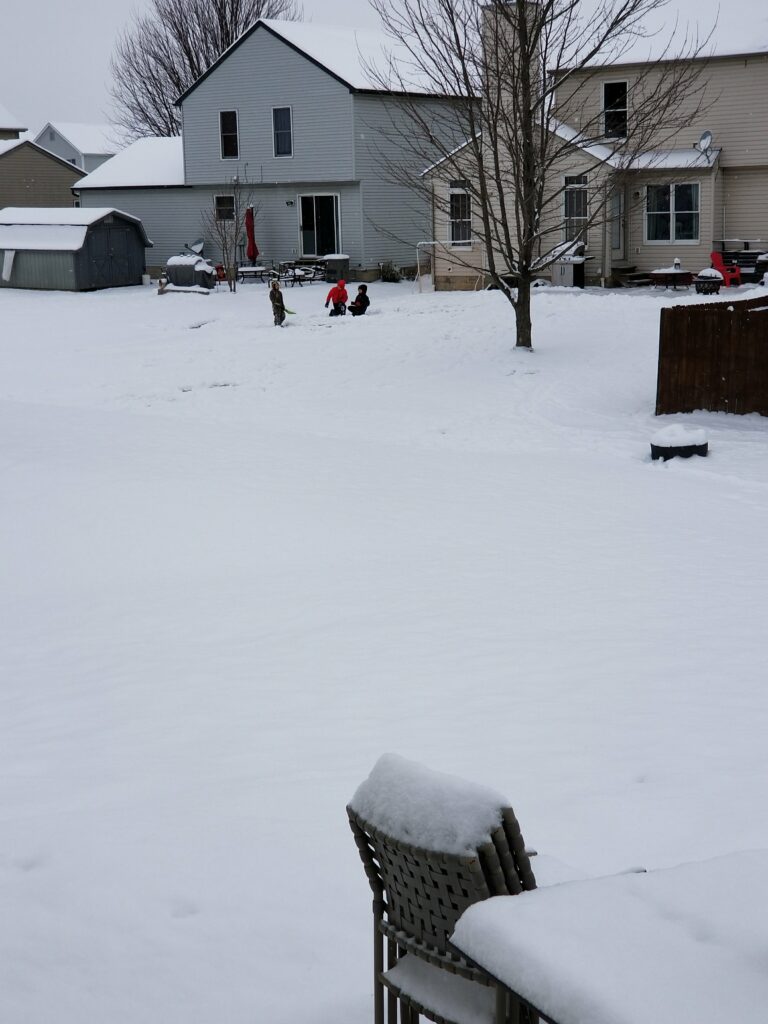 I woke up today at 9:46. As I came down, my husband sat on the sofa looking at me, ready to say his new tag line when I sleep in.

“Mom I need my snow pants. Where are my snow pants? I want to go out to the snow,” C blurted as if it were all going to melt by lunch.

“Mom, I don’t have any snow pants and I want to go out,” My 12-year-old announced. Suddenly he was interested in going out too.

“Seriously? Have you seen outside? There must be 5″ out there. We’ll go to Wal-Mart around noon and hopefully the roads will be cleared.”

He looked at me as if I had told him I would be chaperoning his next middle school dance.

“Yeah, Wal-Mart. You may wear these things once and I’m not spending the money.”

He couldn’t fathom after receiving a $42 dollar Supreme headband from his aunt at Christmas, that he would possibly wear anything from a place only steerage purchased goods in. Knowing he didn’t have a choice, he gave up and didn’t say anything. 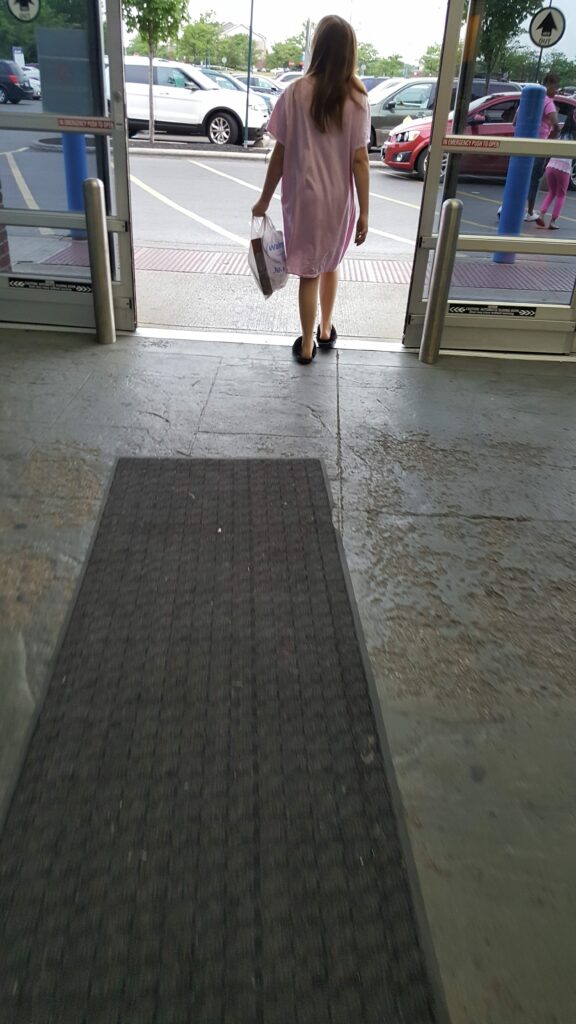 Every time I go into our local Wal-Mart, I know I’m going to have a special, people-watching adventure. I mean, look at this beauty I snapped a few years ago, wearing a hospital gown and slippers. I thought about asking which institution she escaped from but thought, “nahhhh…..”

Immediately, we found the snow pants. And guess what? They were on sale for $11 and there were tons of them! I couldn’t get over the deal and probably repeated more than once, “Oh my God, only $11!”

Next up? The boots. Once we found the men’s boots (my son is already wearing a 9.5 in mens), it quickly became apparent P’s options included camo, camo and more camo. He picked out God awful camo from Adidas so apparently camo is ok from Adidas but a faux pas from Wal-Mart. Noted.

“Let’s go check out. Payless Shoe Source is right next door. We’ll stop over there, see if they have anything.”

I ignored the glare from him after mentioning Peasant Shoe Source. I don’t know if he thought we would be purchasing $300 snow boots and $200 snow pants from North Face but going to the 2 cheapest stores on earth still cost $45 bucks.

At check-out, I looked over to see a sales associate and her hair. She had the entire left side shaved while the other side was long and wavy. The long side was bright white with streaks of purple, bubble-gum pink and baby blue.

“P, unicorns do exist!” I said, jetting my chin in the direction of the sales associate. “I’m gonna need a picture of that.”

Like the good son he is, he pulled out his camera but I immediately decided this was not my finest parenting moment.

“Nevermind. Put it away, I don’t want you or I to get in trouble.”

A 150-year-old man was finishing up his order of 25 bottles of oil. Apparently he was working on cars today. Now it was our turn. Our sales associate has worked at this Wal-Mart for years. She stands roughly 4′ tall, short light-brown hair and big, thick wire-rimmed glasses. She would really play a great elf because not only is she vertically challenged her voice is the highest I’ve heard of a grown adult.

I began staring at her holiday tiara that is apparently acceptable dress code for Wal-Mart. From the tiara, I looked down at her bedazzled Minnie Mouse watch. She had lit up buttons and festive pom-pom things on each side of her vest. Before scanning our 3 products, she had worked up a thirst from the last customer. Without any words and in complete seriousness, she whips out the longest, brightest, shiniest, water bottle I’ve ever seen in my life. It was the size of her torso and could probably hold a drum of water. Immediately, P and I looked everywhere but at her and at each other. We knew we were on the brink of hysteria if anyone made a sudden move.

We got in and out of both stores within an hour and guess what? P played a combined total of 25 minutes outside. I will leave you guys with this hilarious picture of C and his snowman. Apparently, C had the assistance of a head shrinker. 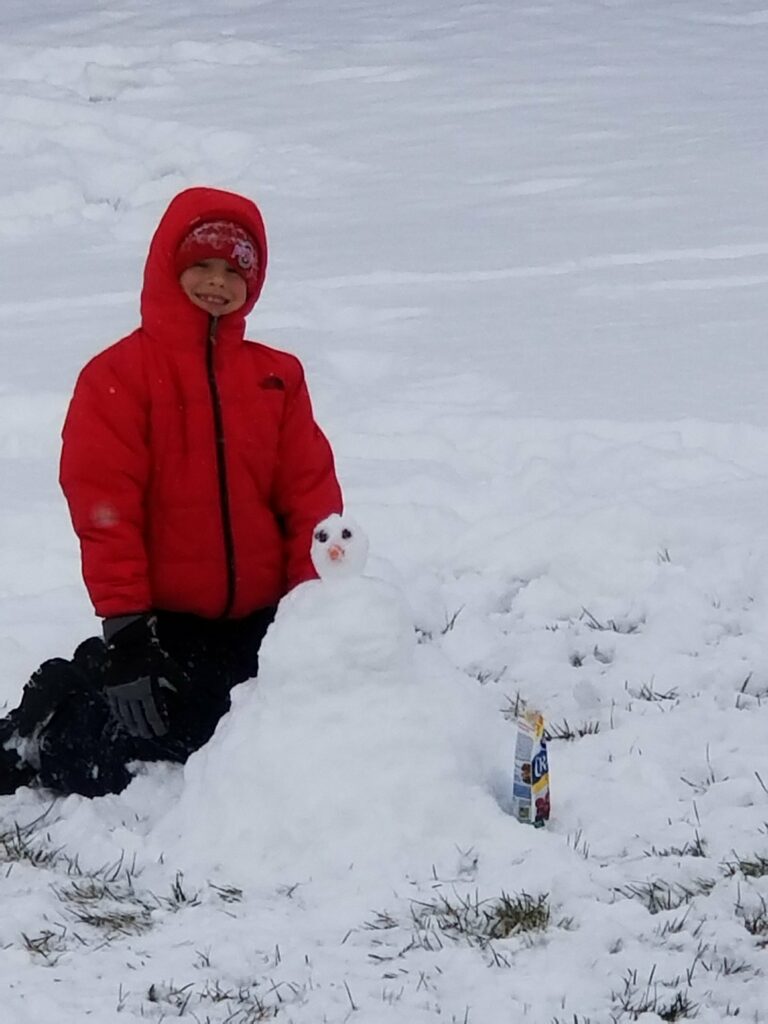