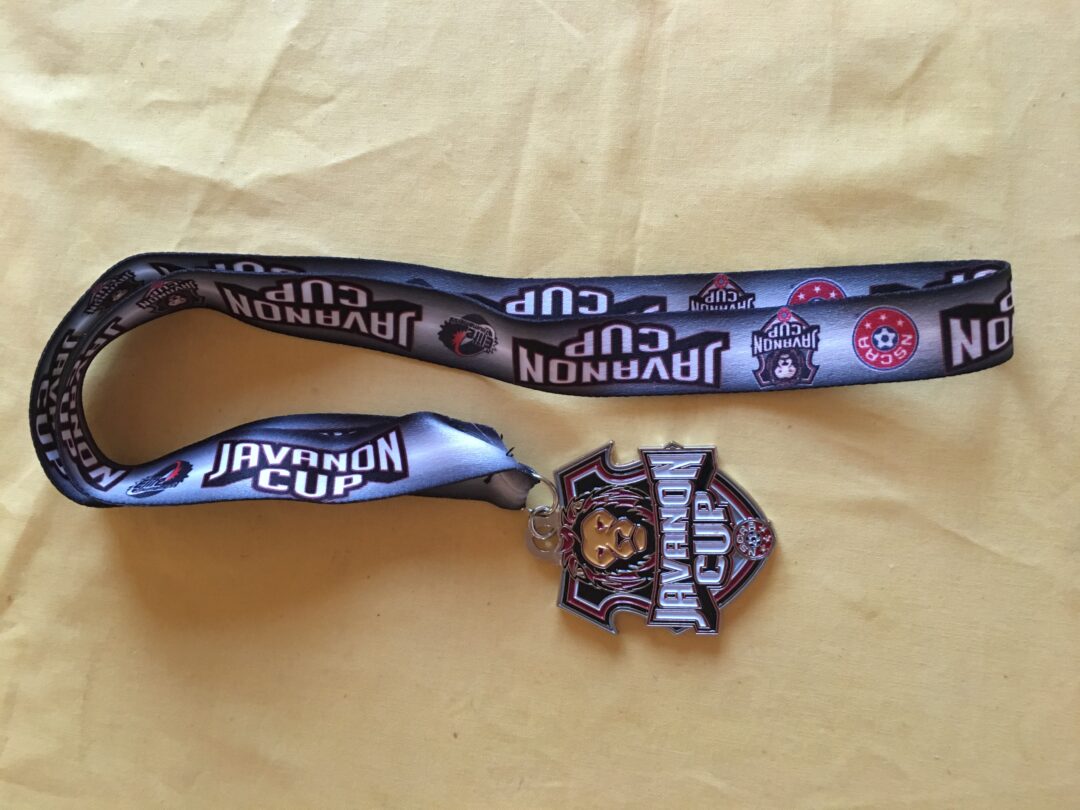 So I went to Kentucky for both sons’ soccer tournaments this weekend. It’s called the Javanon Tournament and held in Elizabethtown, Kentucky. Each son had 2 games on Saturday and then again today. Hence my MIA status as I’ve had NO TIME ALONE. It has allowed me to gather some stories to tell you. Come along on my blue grass journey.

When I think Kentucky, I think warm temperatures, sun-filled days and green rolling hills. Unfortunately, we are visiting a parallel universe where central Ohio is 25 degrees warmer and drier than central Kentucky. The rainfall would rival that of a monsoon in any respectable rain forest. I mean, this was the radar yesterday: 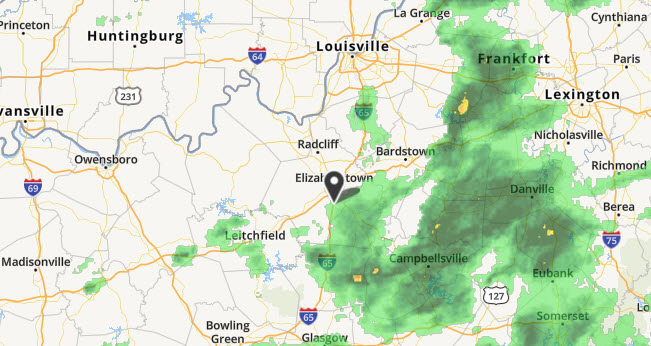 Elizabethtown, Kentucky is not a culinary experience. I didn’t have a decent meal from Friday evening till last night. Despite some calling this soccer field the Disney field because it’s so perfect, their food leaves A LOT to be desired. I had the foulest pizza I’ve had in a decade Friday night then because we had so many games Saturday, I only had time to eat at the snack stand. Huge mistake. The vast menu included either a hot dog or a “chili” dog. The “chili” dog was liquid cheese, coated with something that was to pass as chili. Here is a picture of this abomination: 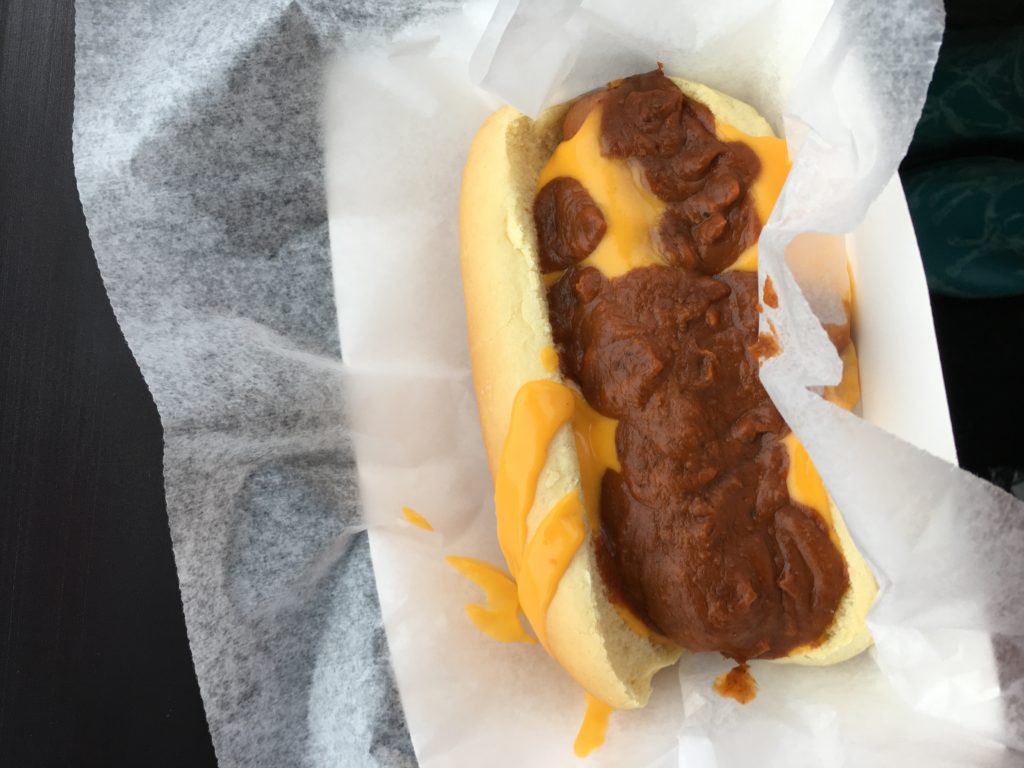 I scraped off the diarrhea coating and with the precision of a surgeon, cut and ate just the dog. 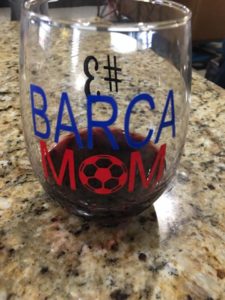 Both nights were pretty much a booze fest. We had our special soccer mom glasses, each with our kid’s number on it. Before arriving at the hotel Friday afternoon, one mom stopped off for “snacks”. After spending an abnormal amount of time inside, her husband went in to find her only to find her wine tasting.

I was over the moon Friday night because not only did we get to play Cards Against Humanity but we got to use the expansion pack my sister bought me for Christmas. The other moms were giving me shit because a few years ago I found you could download Cards Against Humanity for free, you just needed to cut up 560 cards, which I did to save a buck. I thought it was pretty damn smart. I regretted it after my 45th paper slice and losing the feeling in my right hand.

Saturday night we drank just as much as Friday and again ended up in the lobby bull shitting. Earlier that day, 2 other families and mine did 2 loads of laundry consisted of everyone’s dirty clothes thus far. Apparently, it was agreed upon that I would be in charge of getting all the laundry out of the 1 hotel dryer.  I don’t remember this conversation nor should I have been left in charge of this as I could not feel my face by 9 pm. It wasn’t until I received this text Sunday morning that I began to panic: 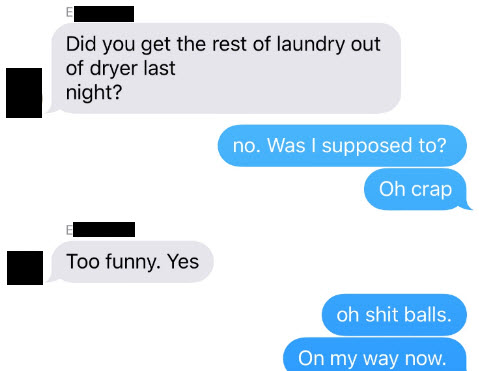 I grabbed an empty shopping bag and headed down to the 1 washing machine, willing all of our clothes to be there. To my relief, not only was our clothes there but someone had folded all of them! Thank God I didn’t wash thongs. I could tell someone older folded them as my jeans were creased in the front and folded more like slacks.

I am quite certain these fields were created over an ancient Indian burial ground. Though we won all games Saturday, Sunday was a shit fest with injuries. During my oldest’s 1st game not 1 but 2 of our players were carried off the field thanks to the opposing team playing like a scene from Vikings. This team came for blood and I’m certain a few of them drove themselves there and probably shaved by now. I only see usually 1 player a season carried off a field. For 2 during the same game it was apparent this team was dangerously physical and the ref wasn’t calling any fouls. I’d like to meet up with this ref in a dark alley. All we could do is be belligerent to the ref, to show our frustration with him.

P (my oldest) had game #2 at 1 PM. By now the wind had picked up and it began to pour as we endured the 45 degree temps.

“I’m tapping out,” I said to no one in particular as we waited for the game to begin. “I don’t want to do this anymore. I’m done,” I whined. I was having an adult meltdown externally and internally. It was the second one for the weekend.

During P’s game he actually scored. He never scores as a defender. A few minutes later he jogged over and whispered, “I’m so tired!” Then jogged back to his position and continued to play. I noticed he was just walking when normally he is running. He seemed glazed over and not with it. Just then he began to stumble back like he was about to pass out. I screamed, freaking out. I composed myself as he gained his footing and continued to play but again, he was walking.

“Take a knee!” I screamed. He ignored me as he shuffled around, clearly in a haze.

In her deep Scottish accent she bellowed, “P! Take a knee!” This pissed her son off as he screamed over, “Mom! He’s fine! Shhhh!!!”

Just then he took a knee. The medics were at our field in minutes and evaluated him for a concussion. Apparently he forgot scoring the goal as well as parts of the game are missing from his memory. As I type, he lies on the sofa this morning feeling sick and he’s not going to school.

The last injury occurred on my youngest son’s team with an amazing kid that was guest playing. 5 minutes into the game he gets knocked off his feet, crashing down and cracking his head. I was far away yet I heard the impact. He screamed, “My back! My back!” He was carried off the field and 2 minutes later the same medics that evaluated P evaluating him. He didn’t get off the bench, in fact they were holding his neck, keeping it steady. They radioed for the EMS and 5 minutes later an emergency squad rolled up, taking him away for several tests. The game continued and we were slaughtered.

Thankfully, the little 8-year-old that was carried off in a squad came back with just a mild concussion after several tests were performed. Both my sons sit sick on our sofa this morning. One has almost vomited and the other has already. I formally request a do over in Kentucky.