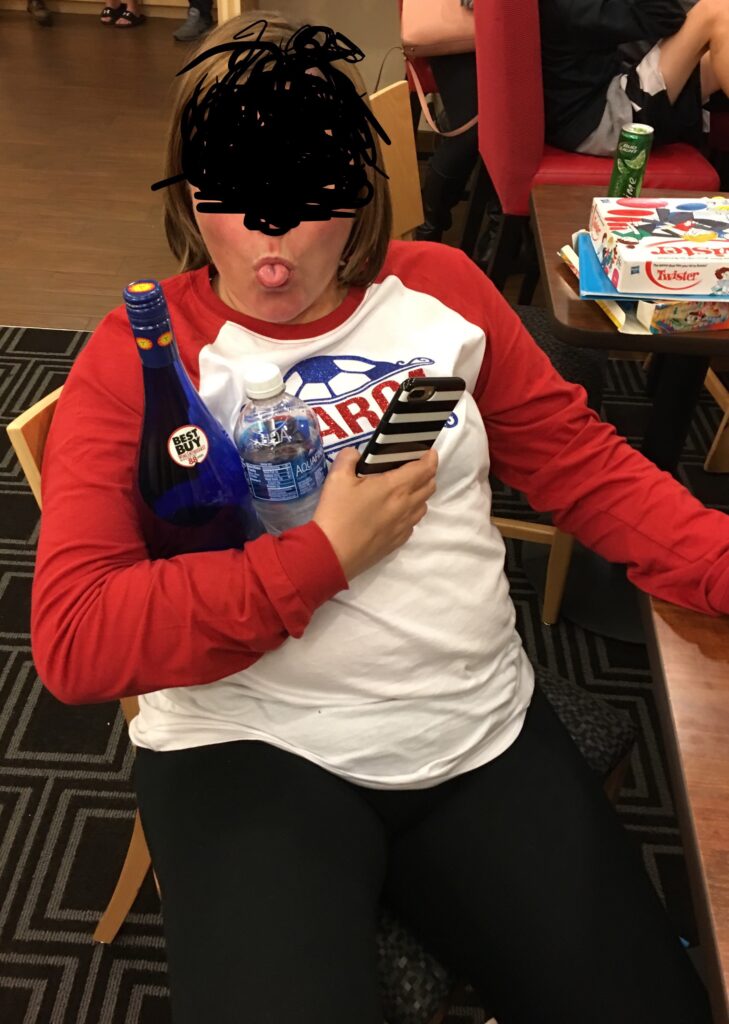 My title pretty much says it all. Over the weekend we traveled with 9 sets of parents to an out of town tournament 1.5 hours away. Because like every f’ing tournament, the first game was at 8 am Saturday, meaning we would have to be there at 7:30 or in my husband’s eyes- 7 am. So it only made sense to drive over to Dayton Friday night.

I disappointed myself as I did not take the usual provisions including an 8 gallon drum of wine, a wine opener and 6-10 plastic wine glasses. I was pleasantly surprised though to find a wine opener in a drawer of our suite along with a Walmart just .25 away. I avoid Walmart like the plague but they were the closest and had wine so the universe would eventually even itself out I figured.

I had a hunch these moms could drink. What I was not prepared for was how much they could drink. Normally there is a sensible one in the bunch, attempting to set a good example and sticks with 1.5 glasses of chardonnay. She’ll usually announce that if she drinks anymore she’ll fall asleep, thus shaming all of us into toning it down a notch. There were actually 4 of those moms but they all went to their rooms around 7PM knowing what was about to happen. Like Macaulay Culkin in Home Alone, we were left to make our own choices and I was the ring leader.

The first evening I had brought Cards Against Humanity to play. I am not a huge fan of playing adult games but this game is THE BEST! What other card game are you going to have options such as Stephen Hawking talking dirty or bleaching your ass hole? Which during the game we found ourselves googling fleshlight and me walking the entire table through what sort of person bleaches their ass hole and why these individuals do such a thing.

“We can’t judge people,” I said in a serious tone, trying to keep the ever rising giggles at bay. They didn’t know me yet and didn’t know whether they were being reprimanded or should laugh along. “Like the Indians that run a sharp stick of wood through their noses, maybe bleaching their ass hole is a way of expressing themse…” I couldn’t get the whole sentence out without exploding into laughter. They followed suit and it was all downhill from there.

After consuming 1/2 of a Black Box Cabernet with another mother which is the equivalent of 2 bottles of wine we realized it was time to hit the hay as we had to be up just 7 hours later. While walking past the front desk the old lady behind it motioned for me to come over. Actually 2 of her as I was seeing double by now.

“Hey, what’s that game you’ins playin’? Will you write it down?” She asked in a Southern Ohioian accent while sliding me a note pad and pen.

“Oh, it’s Cards Against Humanity,” I said while writing it down for her.

“Is it appropriate for teenagers?”

“Yes, completely,” I said then stumbled away.

Evening 2 was even worse. How we weren’t thrown out, nay, how I wasn’t removed from the team is beyond me. I decided to create a character and began to act it out for everyone’s amusement. It was the woman who painted my nails in NYC when I interned there 16 years ago and a character in Chelsea Handler’s book:

“You pick colure, go sit down!” I screamed.

Then I took it to the next level…..

The more I said it, the more the moms laughed, the more it just prompted me to say it over and over again. It was clearly a vicious cycle that went around and around. By now, a mom had fallen off her chair, one was crying and I had moved on to the next topic of my husband motorboating me, thus doing an impersonation of it. Half way through shaking my head back and forth violently, my phone beeped indicating I had a text….this text: 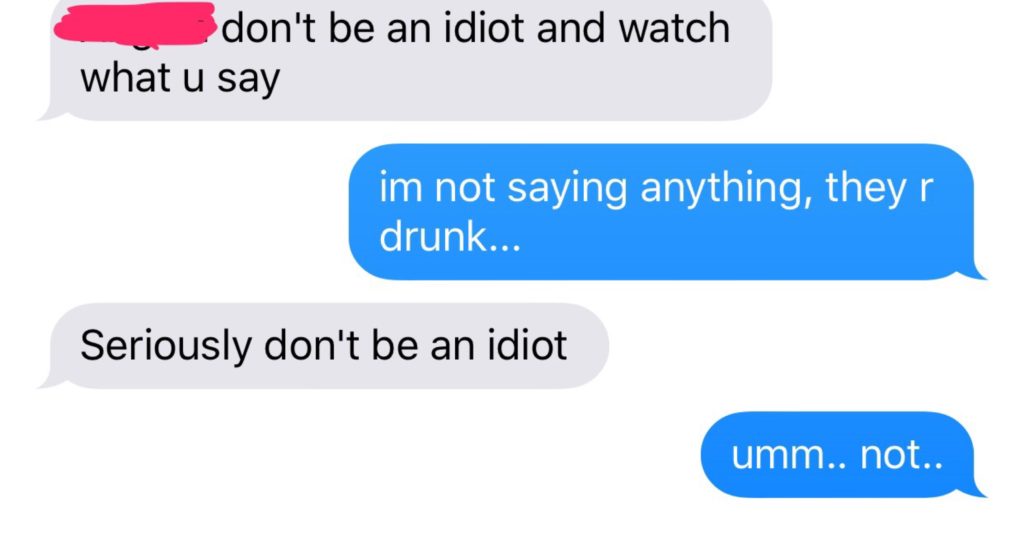 So essentially my husband talked me off a cliff, a potentially embarrassing one. I toned it down a notch. Sure I probably seemed ridiculous to the non-drunk but you know what? I didn’t care and really I still don’t. I am still recovering from those nights and I wouldn’t change it for the world. I made new friends and made some fun memories. Until the next tournament….