Explain Lightning to a Five-Year-Old 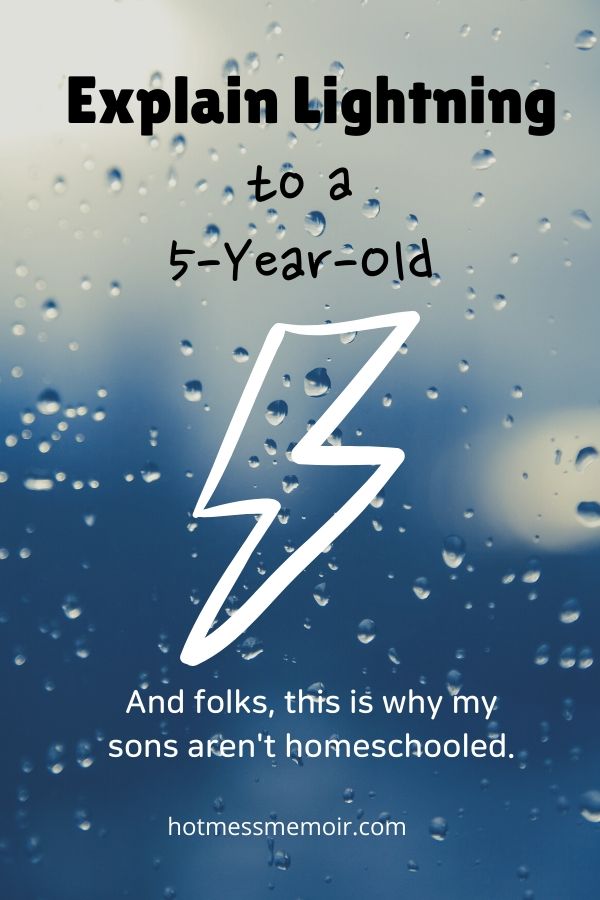 Using my 400 Writing Prompts, I thought explaining lightning to a five-year-old could be an interesting topic, especially because I have no idea how to explain it or why it happens. Also, my guess is the scientific community would frown upon “God bowling” as a suitable answer.  The below are going to be things I think I heard in various science classes many decades ago. I’m going to string it all together and hope I sound somewhat educated.

Well son, lightning is something that happens in the sky. It’s like when the clouds and the air around the clouds (the air is called atmosphere) are really mad at each other and have a fight. The atmosphere is a total hot head and to show his anger, he (yes son, the atmosphere is a “he” in this example), he makes a big thunderbolt and throws it at the atmosphere. But lightning has a sound and the sound it makes is thunder. Do you know you can determine how far away a storm is by the seconds between the lightning and the thunder? Each second represents a mile but we’ll talk about that some other time. The lightning can either hit the ground or stay up in the sky. If the lightning hits you, you can die so don’t stay outside during a lightning storm.

I Was Completely Off

Now because I’m curious, I decided to Google what are the big thunderbolts in the sky. God, I was off. Like way off. Here’s Wikipedia’s definition:

And this my friends, is why my children aren’t homeschooled.