How to Have a Hygge Night 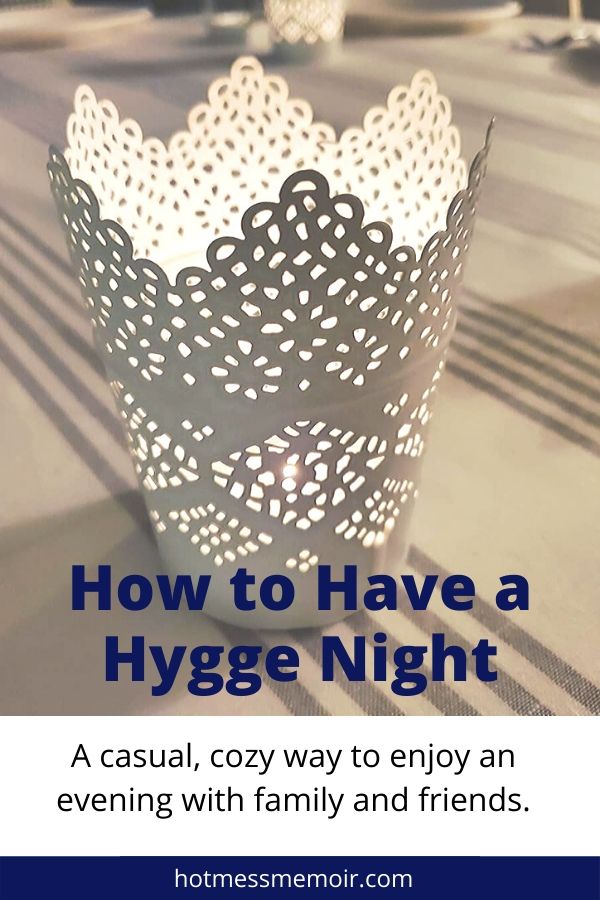 I’ve written about Hygge (pronounced who-ga) a couple of times now. Hygge is a mindset or a feeling and the art of achieving it. Hygge can be described in several ways, from the feeling of coziness to enjoying a simple dinner with friends or family. As I see it, it’s how places like Denmark get through very dark winters and come out smiling. I get seasonal depression pretty bad once the clocks turn back so this time I decided to make every effort and fight it.

So what better way to stick it to seasonal depression than having friends over the first night the clocks went back? ‘Fuck you dark’ is what I thought. But to do this and to make it hyggeligt (pronounced who-gelee) I needed to completely change my mindset on having people over. Sure, I did clean my house spotless before the get-together but that’s non-negotiable.

The Menu (Keep it Simple!) 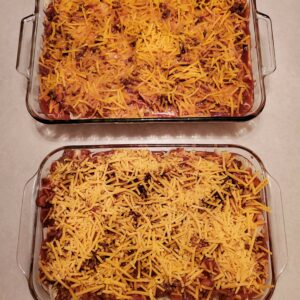 The meal needed to be not only simple but something that screamed comfort food. I decided on a local dish that isn’t well-known anywhere else other than central Ohio: Johnny Marzetti. If you love pasta, meat and cheese, you’ll love Johnny Marzetti. I was cooking for 17 people so it was easy to create 2 large casserole dishes of the meal. I offered a three-cheese bread and little dishes of olive oil for dipping. One friend brought salad and another cookies.

In addition to the pasta and bread, I filled the crockpot full of wassail, a hot cider beverage that you can add rum to. In my opinion, a steaming glass of wassail is very hyggeligt. 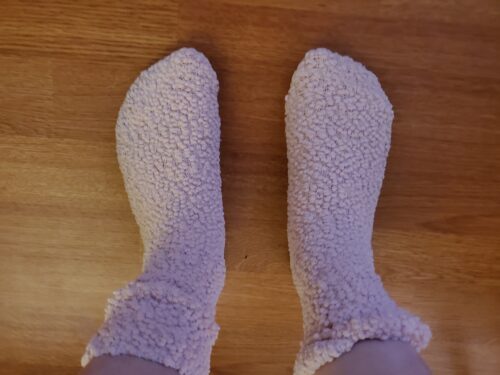 Me and my fuzzy socks

Dress (The Comfier, the Better!)

I encouraged people to wear their pajamas or sweats. I donned very little make-up and fuzzy socks were a must.

If I’ve learned anything about hygge it entails candles, lots and lots of candles. I bought a 300 count of tea-lights at Ikea along with a few candles from Target. Right before everyone arrived I lit the candle and flipped the fireplace on. I thought the place looked pretty damn cozy! 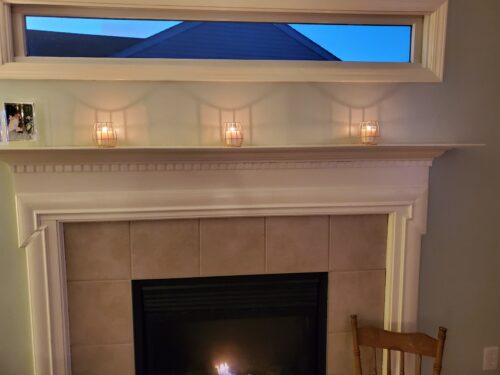 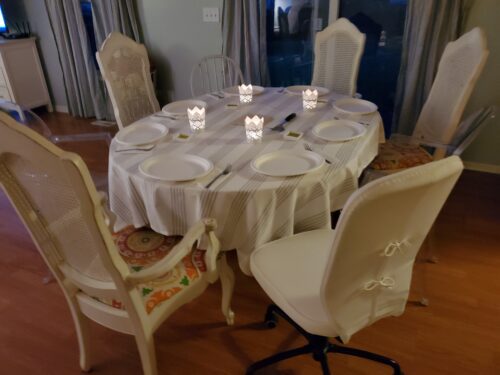 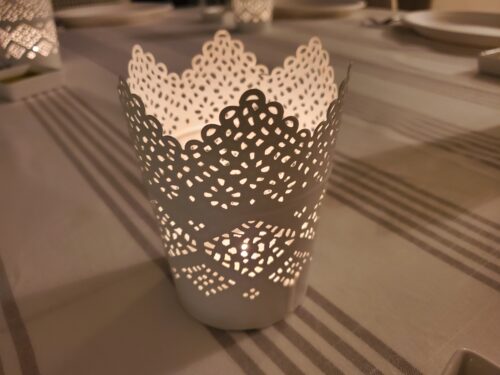 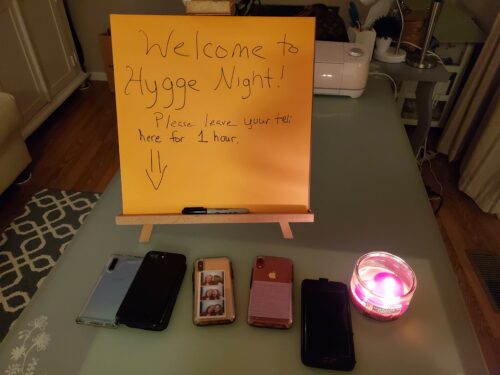 I was on the fence about asking everyone to put down their cell phones. If I didn’t, I’d look over to see kids with their heads down and parents occasionally checking texts. I met in the middle and asked that everyone drop their phones for just one hour. To my delight, no one had issues with it.

I wanted to find a game suitable for kids and adults. Obviously Cards Against Humanity was off the table. I found a 30-page, gigantic post-it note at an office supply store. Next, I googled win, lose or draw topics, printed them on pieces of paper and threw them in a bowl.

IT WAS SO MUCH FUN! We played parents against kids and everyone was smiling. I was the moderator, occasionally helping the kids when the littlest players struggled to convey their thoughts. 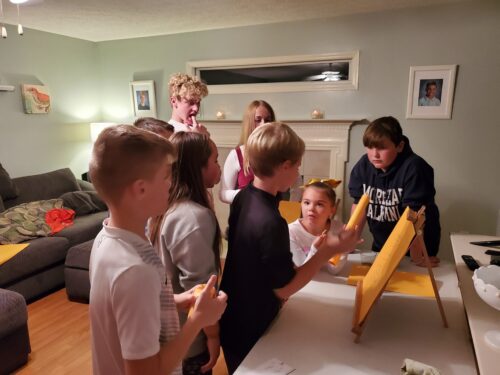 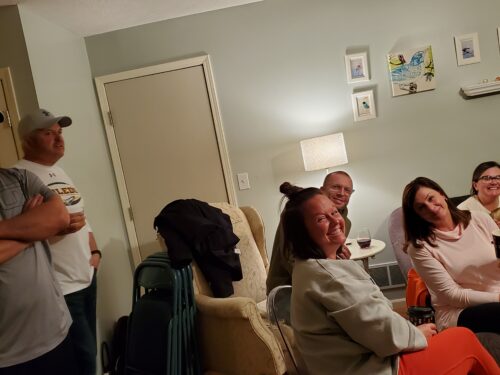 Leading up to hygge night, I heard countless protests from my sons about attending. I’d always counter the whinging with “it’s just 2 hours long, deal with it”. And that was true, I set a time on hygge night, 5-7. It didn’t need to be complicated or a night that dragged on. Not to mention, it was a Sunday night and we had Walking Dead to watch. In the end, I can say with confidence everyone had a blast. It was a simple, stress-free night with friends. The kids had a blast too. 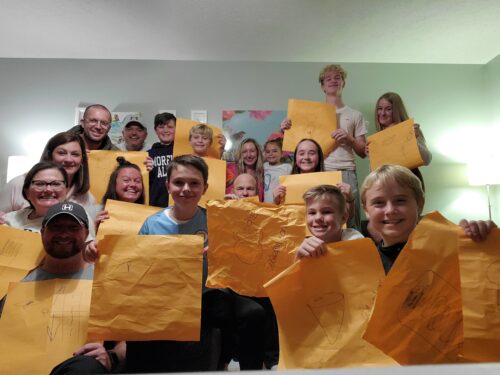 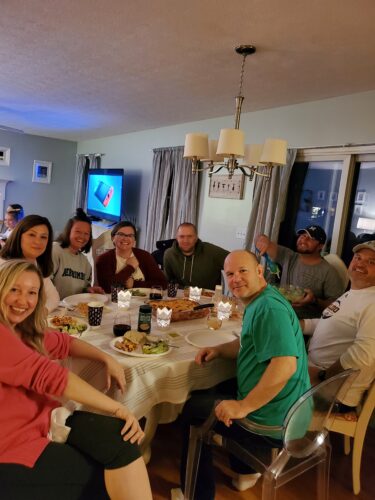 It’s been two weeks since this night and guess what? We’re going to another hygge night tonight. We’re going to rotate homes every few weeks. It’s just another way to stick it to seasonal depression. 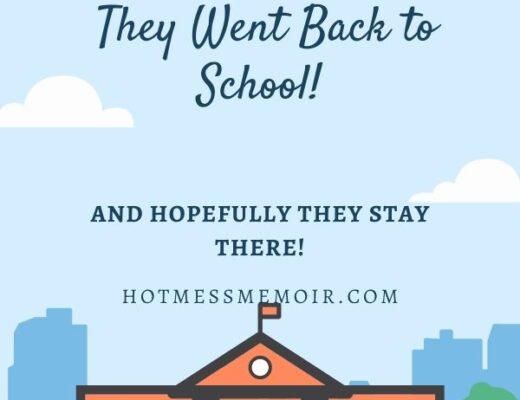 Miracles Do Come True- They Went Back to School 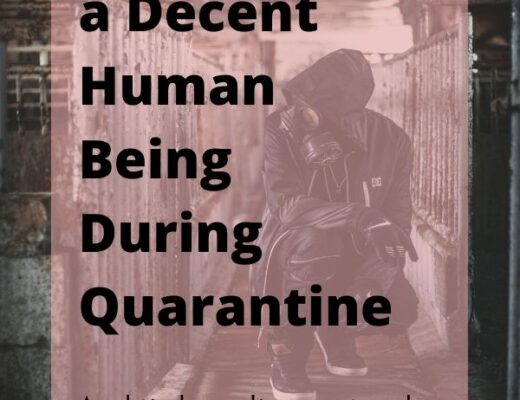 6 Ways to be a Decent Human Being During Quarantine 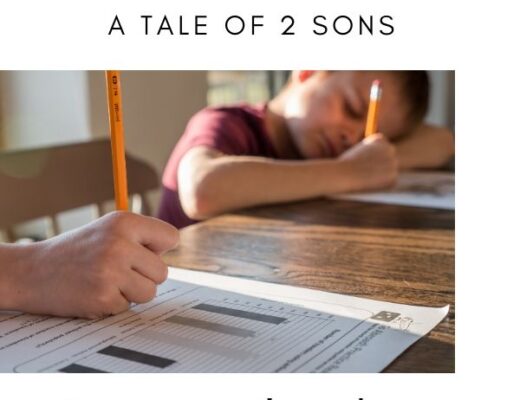 Coronavirus Homeschooling- A Tale of 2 Sons