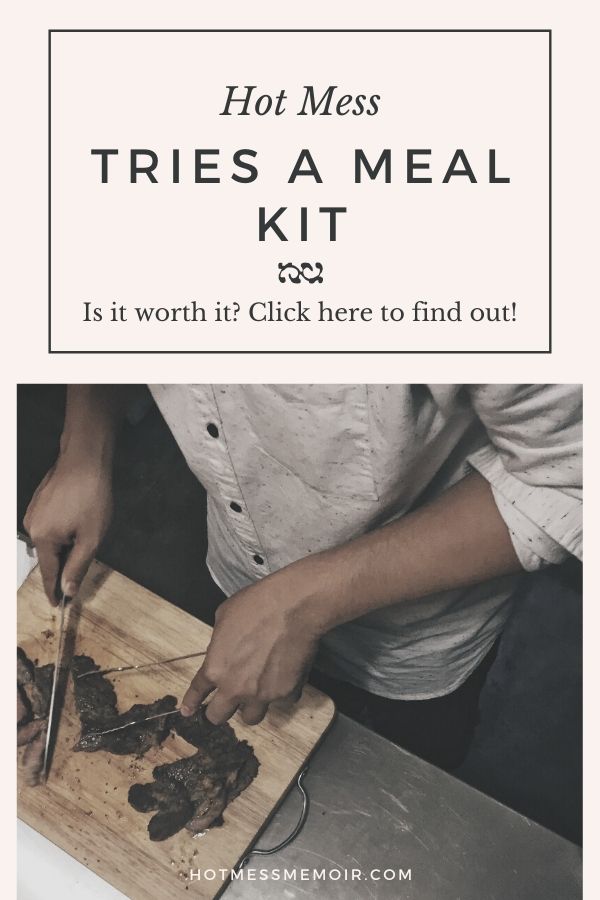 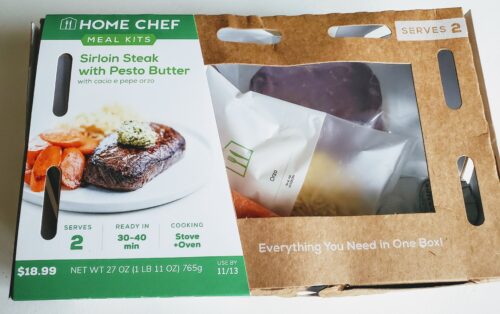 There it was, sitting in the glass case, taunting me to have a look. I looked away, already feeling guilty of the desire I felt. Three weeks ago, my grocery store completed a facelift. They changed around the aisles (which frustrates me to no end), added new display tables in the bakery and installed wall-to-wall glass cases where loaves of bread used to sit. The icing on the cake? They added a Starbucks, because obviously I don’t spend enough money with them already.

“You know you want us,” they called out from behind the case. For the past three weeks, I would visit them, the little boxes in the new glass cases. They were meal kits promising a complete meal for two in about 30 minutes. Everything in the kits is measured out and an idiot-proof recipe card is provided, complete with pictures. But the price tag….

Sure, some of the meal kits weren’t that costly but since I would roll around in filet mignon if allowed, I zeroed in on the most expensive kit.

‘Well, I do have a $3 off coupon,’ I reasoned with myself. Don’t we always reason with ourselves? We talk ourselves into stupid shit with little to no convincing:

‘If I get a massage, I’ll be more rested and less stressed. They always say, you can’t take care of others until you take care of yourself. Here’s fifty-dollars Massage Envy!’

To my delight, I found a steak box with an expiration date of the date I was at the grocery store! Eureka! When it’s the same day, they’ll mark down the price considerably. I marched over to the deli counter to get my discount.

“Ma’am, the expiration date is today. Could you please mark it down?”

She looked at me, then the box and back up again.

“No can do. We send those off to the food bank once they’re at expiration.”

“Are you serious?” I asked. You’ll mark down a bag of salad because the expiration is tomorrow and sell it but you won’t sell me a discounted steak box?”

“I’m sorry, that’s how they’re doing it. Got a whole freezer full of those things.”

I’m not proud of my next thoughts but this is a blog about imperfection so here it goes. My next thought was, ‘how far is the food bank?’ and ‘is it like a Costco or a Sam’s Club and I need a membership?’ Literally, I was thinking about going to the food bank to get the meal kits since they would be ridiculously reduced in cost. I quickly shook my head, admonishing myself for even considering it. I said fuck it and bought it. 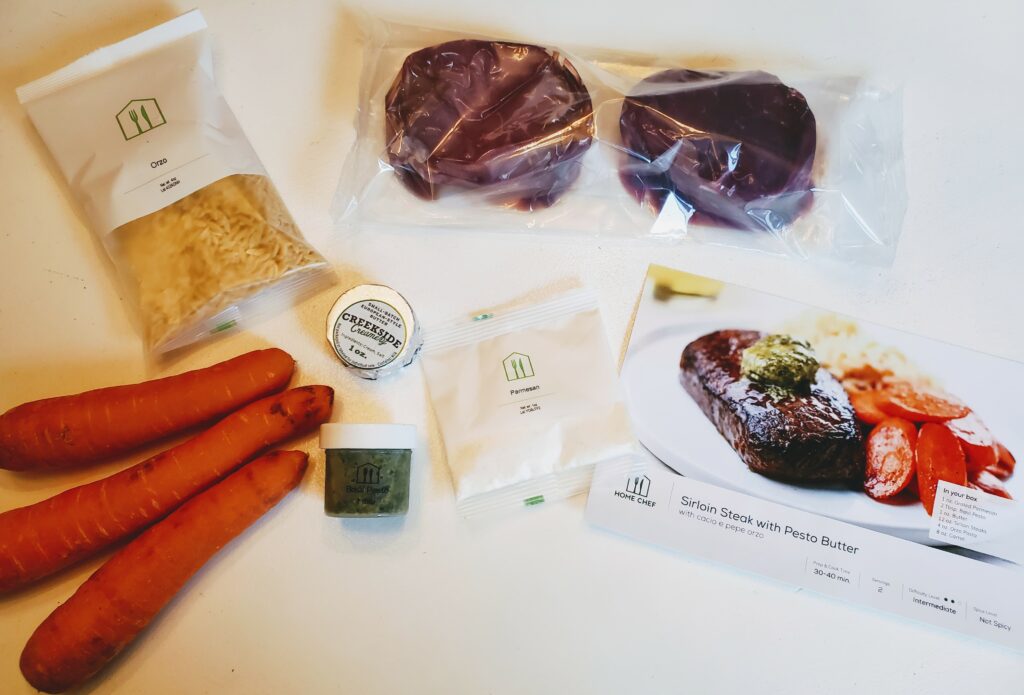 The sirloin steak meal kit included 2 steaks, 3 whole carrots, orzo pasta, pesto sauce, parmesan & butter. I only got one kit because my husband and 14-year-old were attending a soccer dinner. I also thought this would be a good way for my 10-year-old and I to bond a little. As it’s been getting colder, he’s been at the X-Box a little more than I like so this would be a good way to get him off the electronics.

It’s like the Home Chef people had timed everything out as we followed the steps on the card. While the water boiled for the orzo, we sliced carrots and got the skillet very hot. The only thing I would have done differently is one of the steaks was slightly thinner than the other and I should have trusted my gut to flip it at 4 minutes and not what the recipe card said 5-6 minutes. I like my steaks mooing.

Carter got into the cooking big time. He was like a little chef, wanting to plate the meal before it went on the table. He even grabbed a paper towel and wiped the juices that had dripped on the rim. It was adorable. So, the finished product? 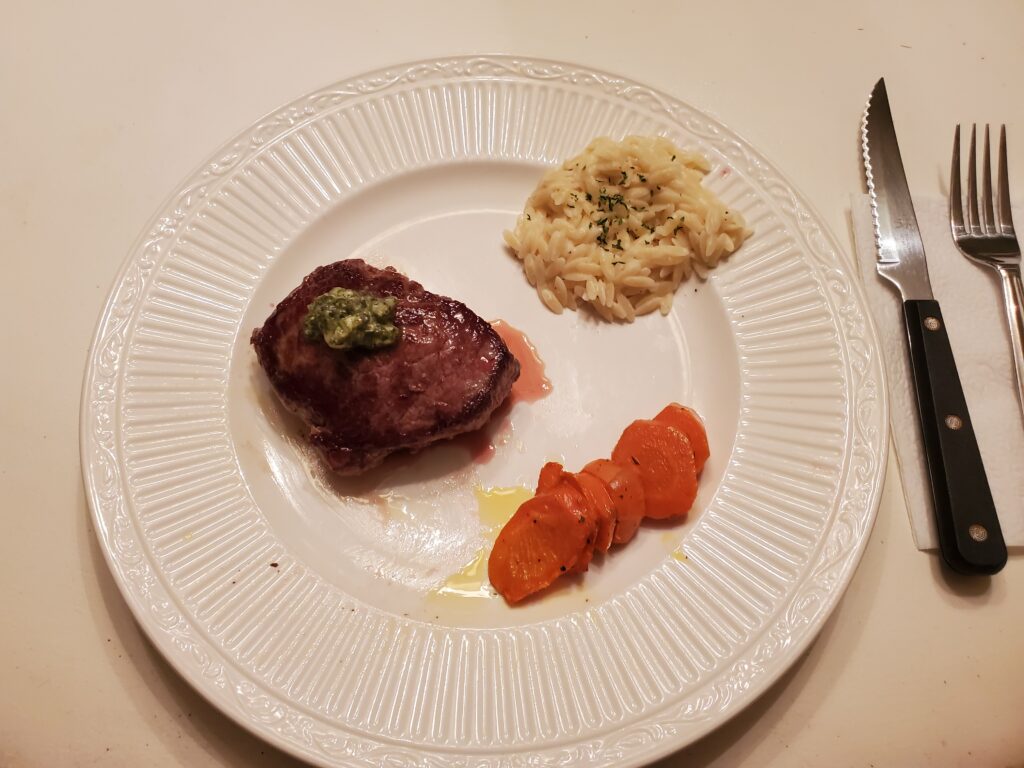 So here are my thoughts on meal kits. It’s a huge time saver. As dumb as this sounds, you’re not grabbing the stuff out of the pantry and fridge, measuring spoons and measuring cups. It’s all portioned out and in a kit. I’ve looked at meal kits in the past and what I’ve found is they aren’t conducive for picky, American children. For example, I could make Carter macaroni and cheese using truffle oil, Vermont cheddar and pasta imported from Italy. He would then denounce it, stating it’s not the right orange and didn’t come from a box. Most of these meal kits were created by chefs (at least that’s what I’m guessing) who have a refined pallet and like to offer interesting flavors and combinations. That ain’t gonna work in our house. Hell, I turn my nose up at several of the kits I’ve seen. If we’re paying that much money for a kit, the entire family needs to like all three items in the kit.

So what are your thoughts on kits? Have you tried them? I want to know if you liked them and if it was worth it. If you’re commenting from another country, do you have meal kits in your country?