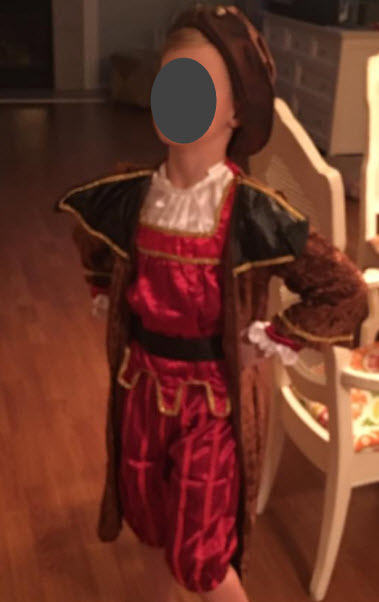 About a month ago I received a letter home from my 8 year old’s teacher about a wax museum. Basically, each of the 21 kids were to pick a famous American to dress up like, research and pretend to be for 30 minutes.

“Get creative! Don’t spend any money on the costumes!” Was the message we received 3+ times, weeks leading up to this blessed event. That is all well and good unless your child chooses a historical figure that is almost 600 years old where it was completly practical for men to wear velvet dresses and brocade jackets.

“Look, I’ll be real,” I began to my 8 year old son C. “If you don’t want me to dress you in a dress, I’m gonna have to order your costume. Since your only going to have it on for 30 minutes, please, please, please don’t get it dirty.”

Don’t judge me, I was going to send it back. For a costume that would be on about the same amount of time some people take to try on wedding gowns, I wasn’t about to keep it.

So Wednesday evening around 6, the costume arrived. I was sweating bullets as Amazon had just 2 more hours to deliver and the wax museum was Thursday. I had visions of burning the midnight oil, after running to JoAnn’s, sewing a historically accurate costume if it didn’t arrive. Here is my baby:

The wax museum came and went. Friday morning I pulled out my son’s costume from his backpack, prepared to send it back. I look it over to ensure it’s 100%. I mean, why wouldn’t it be; it was on for a combined total of 30 minutes. I had lectured and lectured him about keeping it clean. Surely he could do this one thing.

He couldn’t do this one thing.

As I hold up the pantaloons for inspection, there is what I deduce to be black ink all over the right leg. If it were a booger or chalk, I could get that out easy. I took a deep breath and exhaled before I spoke. My son was on his Chrome book on the sofa.

“C, I gave you one job. I asked that you keep this outfit clean for 30 minutes. How did this ink happen?” He was looking at me like a deer in headlights.

“It wasn’t my fault. My friend E had eye black in his pocket. It fell out and splattered on my leg.”

I was pissed and I wanted someone to be pissed at. I was no longer pissed at my son. If he was telling the truth, it truly wasn’t his fault. I now focused my anger on his friend and his friend’s mother who felt sending makeup with her kid to look like Jackie Robinson was a good idea.

I got out the dish soap and began rubbing the cheap material with little success. I now realized the red dye was starting to get on my beautiful and expensive yellow tablecloth. I was able to wipe that up and placed paper towels under the pants. My last ditch attempt was to throw it in the washing machine on gentle cycle.

I allow the pant to air dry. I just walked in to check and the stain is 98% gone. You really can’t see anything unless you look VERY hard. I am returning them and getting my $27 back. If I received this costume in the mail I would have no idea it had been worn and the pant washed.

Had that stain not come out, I was prepared to send the costume to his friend’s mom with a bill for $27 and the following note attached: ENJOY YOUR CHRISTOPHER COLUMBUS COSTUME, YOU OWE ME $27 THANKS TO YOUR KIDS STUPID EYE BLACK. PLEASE REMIT PAYMENT ASAP. THANKS!