The Trumps Plan For The Inaugural 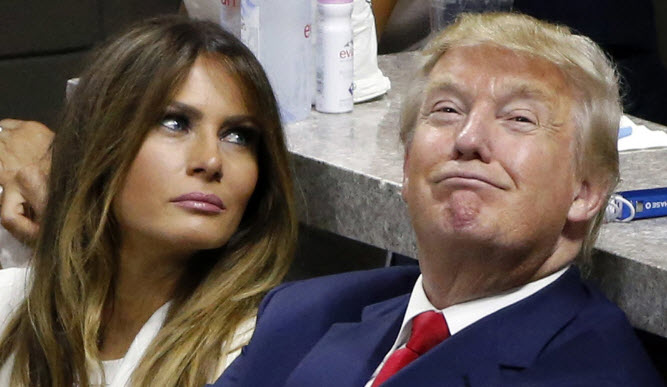 Occasionally I get these imaginary scenes in my head to which I begin to laugh uncontrollably then within 24 hours later I’m typing it out laughing like a crazy person during the entire process. Here it goes….

Scene- Trump Tower, 58th floor. Melania and Donald are sitting at a large, ornate table, overlooking the skyline with ceiling to floor windows. Breakfast has just ended. Melania is reviewing her to do list on her iPad while Donald is flipping through Teen Vogue, looking for #4.

“Donald, we need to figure out our first dance,” Melania says, stylus in hand ready to write on her iPad.

“Mel, I’ve got it. It’s going to be amazing. Are you ready for this? It’s dedicated to you and I’ve flown in Kayne to rap it.”

“Rap it?” Melania questions, choking on her water.

“Yes, rap it. It’s called Gold-digger. How perfect is that?” Donald shrugs his shoulders spastically, throwing his hands in the air.

“What is this Gold Digger Donald?” Melania asks.

“Donald, did you decide what you are wearing?”

“Yes and I’m drawing inspiration from the hottest series to hit HBO since Sex In the City,Young Pope. It’s going to be great. I’m going to wear an all white Pope dress, just like Jude’s, thick gold cording and a Piscatory ring.”

“Donald, I told you Carolina was dressing me in white. Both of us can’t be wearing white.”

“Twinsies! Did the PA get the spray tanner scheduled?”

“Yes, today at 4. We need to decide if Baron is coming to the swearing in or just the parade.”

Donald looks at Melania as if she had just asked to shop at Old Navy.

Melania makes a futile attempt to furrow her brow, instead looking as if she had just sucked 3 lemons in lieu of 1.

“He’s your third son Donald. About 11 years ago I think. I’ll confirm with nanny.”

“If Barron is available, then have him come to the parade. Tell him he will have to wear a suit. None of this kid stuff like the Nike or Upper Armour.”

“I believe it’s Under Armour.” Melania responds, not 100% in her convictions.

“Donald, the last thing I want to talk to you about is your speech. You’ve barely worked on it. How many pages do you have?”

“That is great news! Let me hear it!” Melania exclaims, clapping her hands together in sincere jubilation. Donald reaches for his iPad and begins to swipe.

“Four score and seven years ago our fathers brought forth, upon this continent, a new nation, conceived in liberty, and dedicated to the proposition that all men are created equal. Now we are engaged in a great civil wa…..”

“Use away. You are right.” Melania concedes, realizing there is no point in arguing.