2 Drunk Sisters On My Birthday-Part 1- Preparation 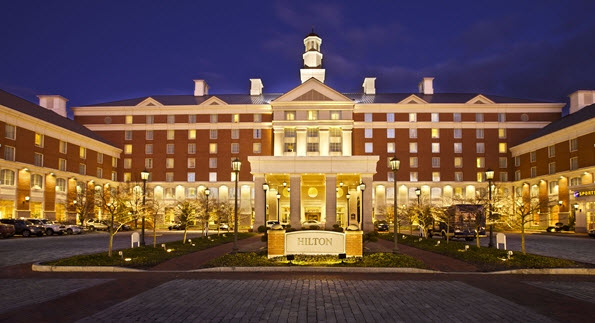 My birthday celebration was this past Saturday. I can finally write about it as my sister has apologized for the ending and I don’t want to slap her to another continent any longer. I don’t know how many posts this is going to take to get to the point where a thousand pieces of glass are on the floor of the bathroom, so bare with me.

Around 2, my sister S and I strolled up to the front desk of the Hilton. Like the lifestyle center it neighbors, it has been designed for the elite and spares no expense. The only drawback is it is being remodeled. The lobby was a hot mess having temporarily been relocated to a ballroom while the real lobby is being refurbished.

“Do you mind if I do my sandwich trick?” I asked S, not wanted to embarrass her.

“No, go ahead,” she said with a hint of doubt in her voice. Lately, I’ve felt she has discounted pretty much anything I do and it’s been pissing me off. It’s almost like I’ve taken the roll of the parent (I’m her sister) everyone makes fun of behind their back. I’m 39 peoples!!

$20 dollars later, here is the room we walked into because the sandwich trick is alive and well! IT WORKS! 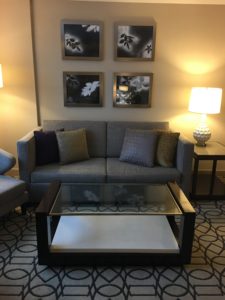 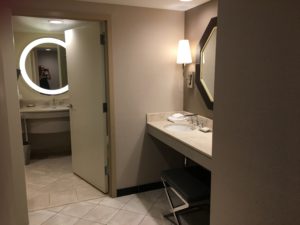 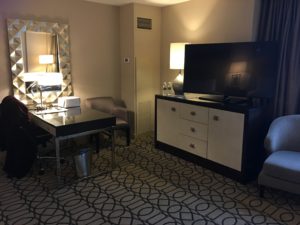 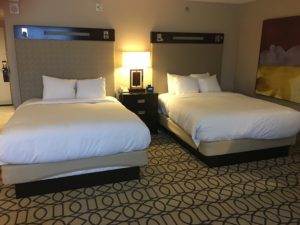 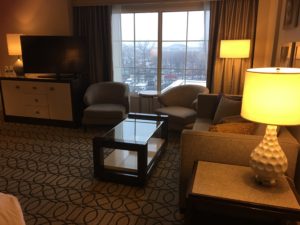 “Ah man…the bathroom has Peter whatever toiletries,” I said, holding the non-irritating mouthwash, branded with the name. I was already formulating how much of a tip it would cost to get more tubes of the lotion.

“I brought a little champ,” my sister yelled in.

“Champagne!” She offered back. Apparently it was too much work to verbalize the second syllable.

This champagne would be in addition to the 4 free drink tickets and 2 breakfast buffets the sandwich trick scored, I might add. You really should try it! Don’t be afraid of the rejection, I have yet to experience it in about 10 different sandwich trick situations. 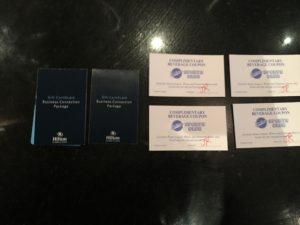 “Where’s the fridge?” I heard her yell while I was still in the bathroom with the luxury lotion half way up my nose. “Oh my God, does this place not have a fridge? Oh, found it.”

Just as I’m walking out to help her locate the fridge, I see her cramming what I can only deduce is my birthday cake into a fridge the size of a shoe box.

For the next hour we sipped champagne and bullshitted, completely regretting not bringing any nice outfits to wear, thus having to walk over to the mall in monsoon like weather. I was wearing my I HAVE THE VOCABULARY OF A WELL EDUCATED SAILOR shirt on and seriously contemplated if it were dressy enough for the French restaurant. Then I realized there would be multiple pictures taken and posted on Facebook. The last thing I wanted was someone from high school seeing my photo and thinking, ‘she’s really let herself go’.

We headed over to the mall. I preferred to check out Forever 21 so I could be made to feel even more old and fat after everything I picked up was either an extra small, a 0 (which by the way, isn’t a size!), a 4 or 6. Despite being a size 8 normally, I required a 10-12 in Forever Anorexia. My sister was even more annoyed as she found Forever Anorexia beneath her.

Realizing I was too huge for this store and watching S pretend look at stuff. We headed over to H&M. I picked out a $6 dress that I knew would not look good but decided to buy in the off chance a miracle happened, a green lacy, sleeveless top and lastly a black lacy, short sleeve top. I had come to accept that given it was torrential downpours and ice all over the sidewalks, I would be wearing my Hans Solo boots and denim tonight.

Next up? Dinner, comedy and the drinking debate that spiraled into a heap of shit.