All These Channels And I Can’t Find Anything to Watch 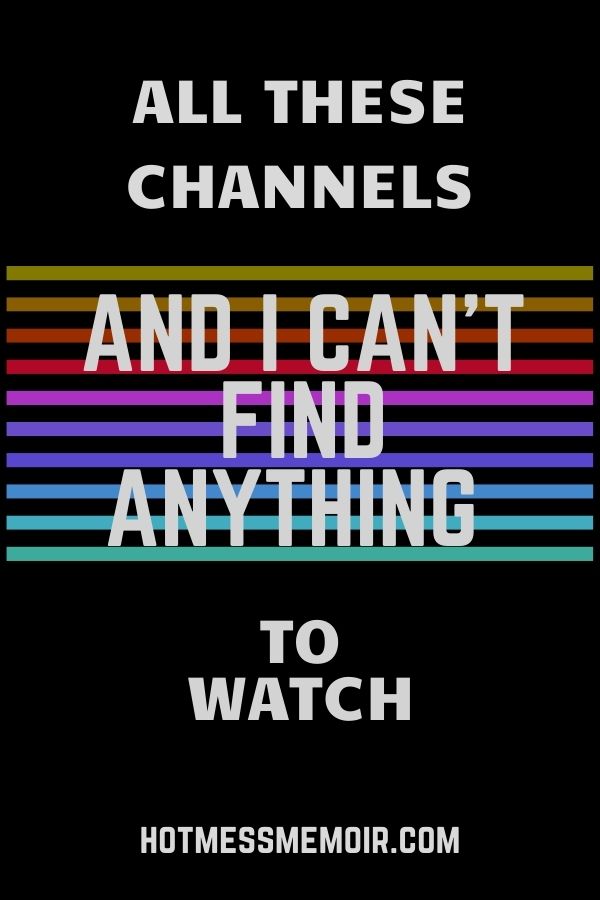 When I was growing up, we had a little brown box that sat atop the television. If we wanted to change the channel between either 4,6 or 10, we would have to get up and change it. Then, additional stations began to appear. Suddenly, we had channels like Comedy Central, Fox, HBO, and let’s not forget “Skinamax”. Honestly, the late ’80s was felt downright decadent.

Fast forward 30 years and we have so many channels, I couldn’t even tell you how many. Because we live like we’re Amish, we still have cable which includes hundreds of channels. But it’s not just channels, we have the following streaming services:

So why the hell can’t I find a damn thing to watch? For example, tonight’s Thursday. In the ’90s, Thursdays would be reserved for Friends, Will and Grace and ER. In the ’80’s I remember Golden Girls, 227, Empty Nest and Family Ties.

The More Popular a Show the Fewer Episodes Made

Here’s my theory about so many series. Series start out with like 15 episodes. As it becomes more popular, they begin to cut down on the number of episodes offered. Like the writers and actors can’t be bothered with anything more than 8 episodes, spanning 12 weeks. Meanwhile, we walk around like junkies, looking for the next episode (fix).

How can they do that to us?

I can’t even remember what happened in West World between seasons because they space them out so far. Handmaid’s Tale would normally be back on by now, but that f’ing Coronavirus got in the way. Walking Dead then Fear the Dead normally take up most of the year. They were even going to have a third spinoff that got postponed because of all of this.

I’m scared that one day, I’ll log onto Netflix only for the following message to pop up:

YOU’VE REACHED THE END OF NETFLIX.

Am I the only person here that has thousands of shows at their disposal and quickly coming to the edge of the cliff? Perhaps I’m just a loser that watches way too much tv. Tell me your thoughts on this in the comments. I’m also taking recommendations.