We See You Scratching Yourself 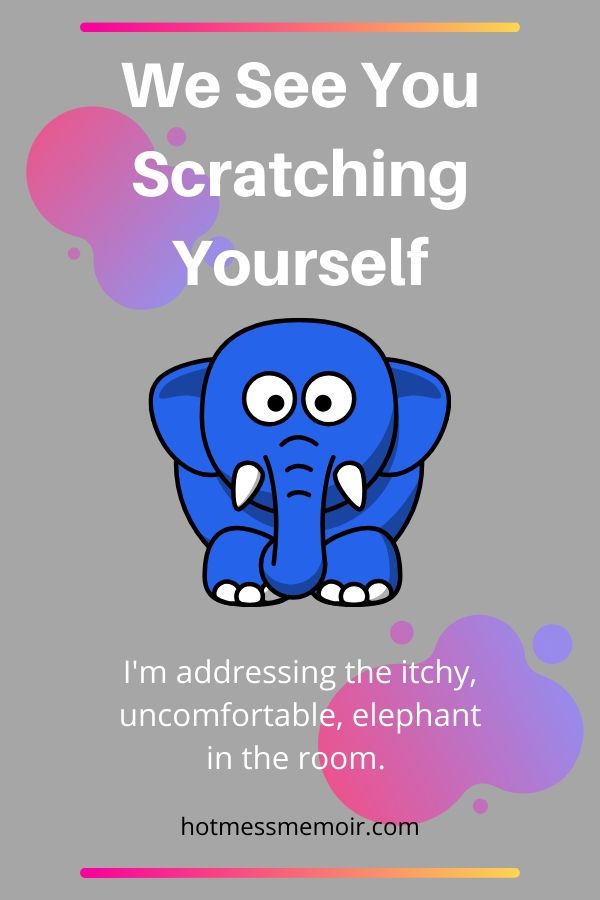 I need to address an elephant in the room with the men of the world. It’s something that I see with young and old men, all races, straight or gay. It just doesn’t matter. Are you scratching or adjusting the members down South? I know, the questions I have that go through my head, but I think it’s valid.

For example, I’ll be talking to a gentleman and all of a sudden, despite holding complete eye contact, I see out of the corner of my eye, a hand go down to do what? Scratch? To adjust the situation? What are you all doing down there? If it’s a scratch then the CDC needs to drop what they’re doing and get on this. Like, don’t worry about formulating next year’s flu vaccination because we have bigger fish to fry and that’s itchy balls….all over the world.

Look, occasionally we’ll get an itch down South that is borderline torture. But come hell or high water, we will not itch it until we are safely by ourselves, in the privacy of a bathroom stall. That is the discipline we as women, have mastered and will continue to exercise till our last breath.

So that leads me to my next question: is the itch so awful that you can’t wait till you’re by yourself? Are your balls on fire? And I guess I’m putting too much emphasis on the ball situation down there. It may be like when you have too many people on the backseat of a car and each person occasionally adjusts their body, pulling up a leg or wrapping an arm around another just to get a bit more comfortable.

I’ve seen all sorts of itching/scratching techniques and I must say, you guys are super creative. Let’s see if I can remember what I’ve seen:

Flick- Like when you have a tiny fly that lands on your arm, you kind of flick it away. Instead, the flicking is done in that area.

Brush- Your hand is down there and it gracefully brushes the area. Just once though because you are a gentleman.

Trumpet- As we are having a conversation, I see fingers, one by one, press down on that area. Almost like a 1-2-3 motion. As if those are the needed steps to obtain serendipity.

Twinsys- You’ve got either a major over-populated area down there or a four-alarm fire because the situation doesn’t call for just one scratch but two.

Oblivious- This person gives zero fucks if they are talking to their mother or the queen of England. They have a need and they’re going to take care of it and that is scratching till the job is complete.

All In- Similar to the oblivious, they are all in. Raised by wolves, the All In will not only scratch when necessary but it will be an exaggerated motion, ensuring everyone on his team is comfortable and serene. The All In can also be found burping at the dinner table or shopping at Wal-Mart.

So there, I’ve addressed the itchy, uncomfortable elephant in the room. I hope I’ve done a service to the male population out there just to let you know that as women, we see everything. Just because we make eye-contact doesn’t mean we don’t see other actions occurring around us. You’ve been warned.