My Rant About Basic & Extra 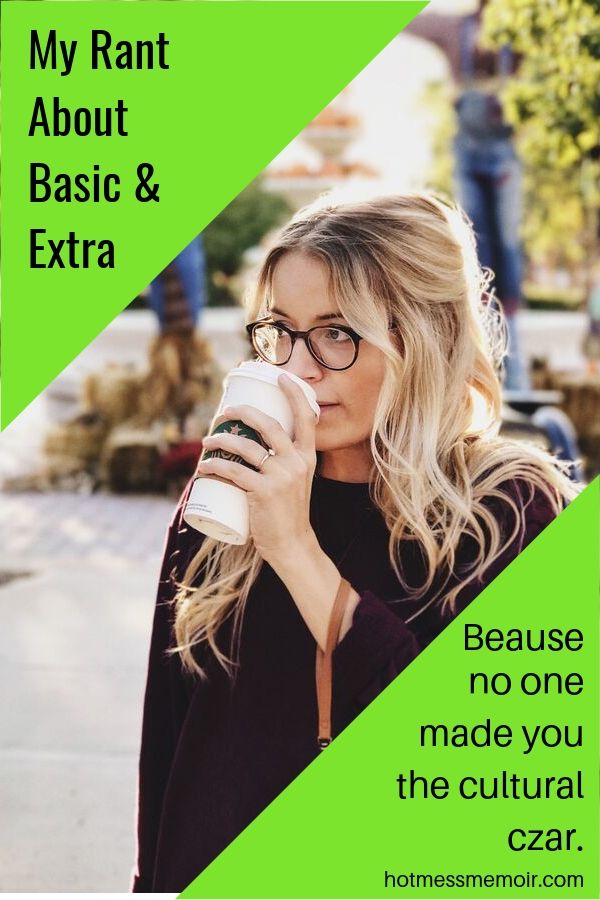 I have a lot of time to think during my 40-minute commute to work and my 50-minute commute back. It’s also a time I listen to podcasts. During today’s podcast, the podcaster declared someone basic. That lead me to my next thought on a Facebook personality that used the term extra in more than one of his videos to describe someone.

“What does it mean when someone is extra?” I asked my 14-year-old.

“I don’t know he said,” not looking up from his phone, “I guess it just means when someone is over the top about something.”

When did words like obnoxious or dramatic stop working? Why did some idiot take a word I use at Chipotle for the amount of cheese I want on my burrito and turn it into a personality adjective. And plus, it just doesn’t sound right,

“My son wouldn’t leave the toy aisle. He was being so extra about the Legos I refused to buy him.” Yup, that doesn’t sound right in any which way, matter or form.

Your either obnoxious, dramatic or both but you’re not a size. See that’s the thing, I see extra as a form of measurement. Extra pepperoni, extra-large, extra-small, etc. Do you see what I mean? What will be the new extra? Double-wide? Venti?

This term annoys the shit out of me and I have a lot of comments so buckle-up Birtha. Anyone that calls anyone basic should be slapped on the spot. Who made you the grand czar of culture? God? Did someone hand you a non-basic sheriff’s star? I don’t think so.

Unless you speak three languages thoroughly, spend every weekend flying your jet, regularly participate in humanitarian projects and are fit as fuck, do not think of yourself any better than the rest of the world. Just because you buy pink Himalayan salt at Whole Foods in lieu of Morton salt or pretend to like kombucha while we’re all drinking pumpkin spice lattes doesn’t make you better. Do you know why a lot of people drink pumpkin spice lattes? Cause they’re fuckin’ good! And you know what? I’ve heard that enjoying a glass of wine is basic. Meanwhile, your bat-shit crazy ass is forking over $14 for a martini because the restaurant boasts the alcohol is infused with baby laughter.

In fact, announcing someone or something is basic is pretty much the most basic thing you could ever do. Again, who do you think you are and what planet did you originate from? Tell you what Megan, why don’t you do you and don’t worry about what brings other people happiness. What you deem as basic is actually what normal people call popular.

I think I could go on and on but I’m not. I actually just finished my vanilla latte and am now going to have a glass of red wine.

CHEERS! ENJOY WHAT MAKES YOU HAPPY!