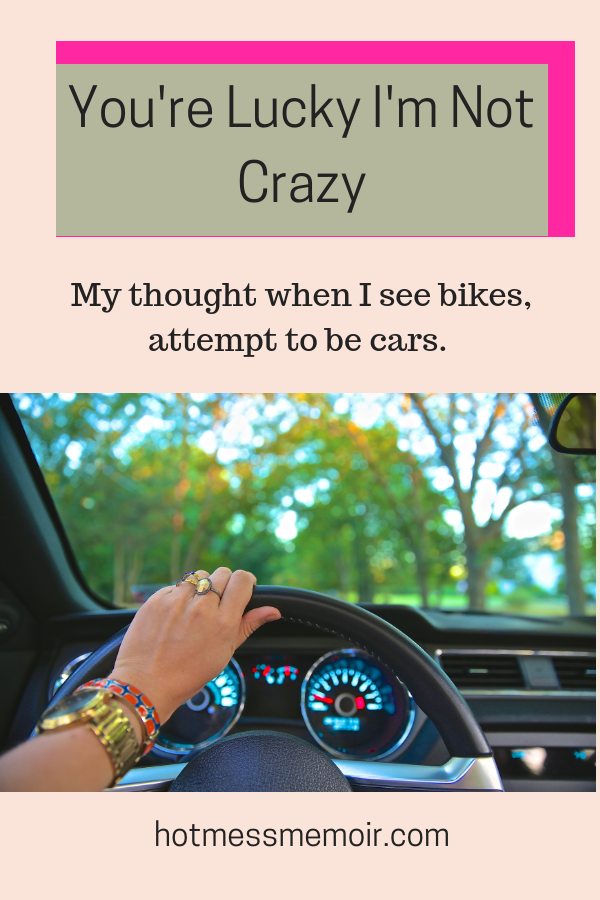 Today was an interesting day. Nothing Earth shattering, just…interesting.

The Commute to Work

I have a 50 minute commute and when I spend 90% of my morning blogging and 10% actually getting ready for work, sometimes the getting ready part leaks into my commute. I know this isn’t exactly role model behavior but I put on a full mask over the 31 miles I call a commute. I promise though I only do it when I’m at a stop light or at a stand still.

Today I wore my new pink and white striped button down shirt along with my skinny jeans and cute booties I had bought at Old Navy last week. Just as I took a drink of my latte, SPLAT, several drips of coffee dripped all over my pretty shirt.

“God damn it!” I screamed out loud. I leaned over to my glove compartment to find no fucking napkins. The price I pay for cutting down on my drive-thru excursions. I looked down and saw I had a left over napkin from the cookie I swipped at the dentist yesterday. Yes, my dentist serves cookies. I deduce its in an effort for repeat business. Obviously it’s working because I dropped over $600 yesterday for my sons’ fillings. I looked at them when I was paying and said sweetly, “Merry Christmas.”

Relieved I had my Tide stick, I pulled it out and began drenching the spots. After that was done, I began applying foundation in which I dropped the damn stick on my dark denim.

“Fuck!” I said, swerving as I attempted to retrieve the foundation stick. Once I was back at the wheel, I looked down again to discover a gigantic white circle where the foundation had dropped on my knee first.

‘So this is how it’s gonna be today Satan?’ I thought.

I got out of work early today as I had agreed to bring to an event my company was sponsoring this evening, 2 missing ingredients. The event was downtown. Though the 15th largest city in America, driving in Columbus has never intimidated me as I’ve worked downtown and went to The Ohio State University, one of the largest campuses in the U.S.

Today I had the pleasure of seeing the new scooters. Apparently my city now allows the rental of these green scooters and there’s scooters everywhere. Scooters crossing the street, parked scooters, scooters on the sidewalk. Mark my words, if the city approves these scooters to act as cars and share the roads, I will officially lose my shit. I’ve openly expressed my disdain for cyclers who ride their bicycle in line with cars, as if they are a car. When I get behind them, all I want to tell them is,

“You’re lucky I’m not crazy because any crazy person worth their salt would probably mow you down right now.”

After getting through downtown, I made my way to the East side of Columbus, through the suburbs and finally just 5 miles from home. One last thing I want to share with you guys. There’s a church and they’ve developed a new tactic to grow their congregation. They set 2 people on the side of the road and they just wave to you. Literally, that’s all they do, they smile and wave. Perhaps this has been effective? I don’t know. I just know I politely smile back, wave and mumble under my breath, “obviously someone’s had their B-12 shot.”