Day 2 of My Diet- I’m Not Dying Anymore 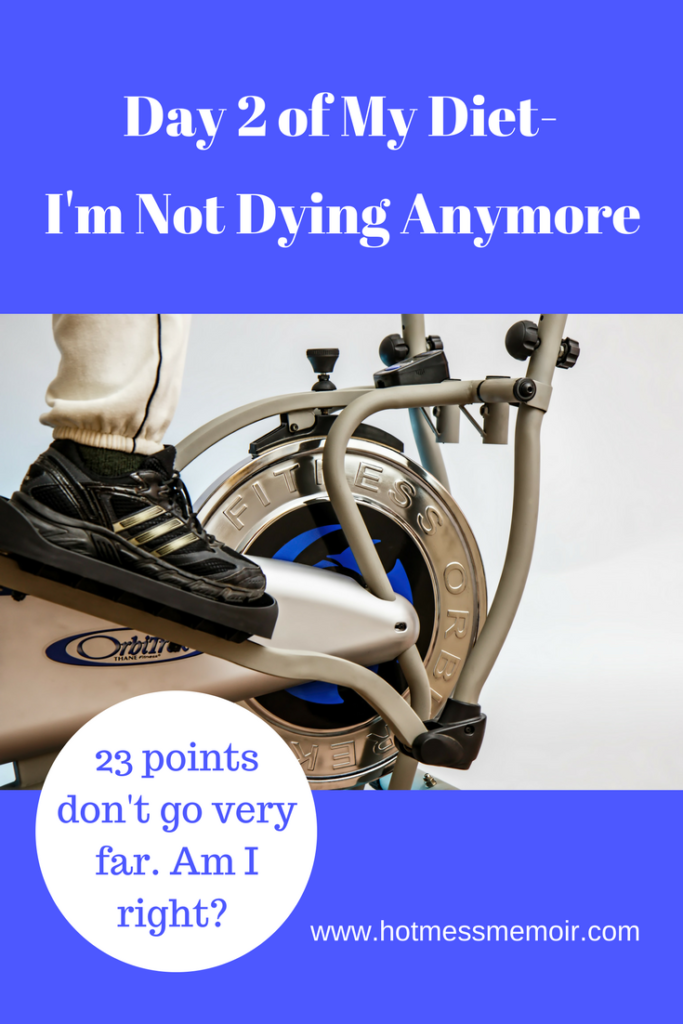 As many of you know I joined Weight Watchers and I promise this isn’t going to turn into a diet blog. I’d slit my wrists before that happens. Anyway, it’s all comical to me and I like to bring you comedy.

Yesterday I had learned my lesson as I had blown 92% of my daily point allowance before 12:30. Today, I replaced a granola bar with strawberries and cut my 8 gallon drum of latte to an adorable 8 ounce latte.

“This is cute,” I said as I held it up, marveling at how petite and adorable it was.

Since I contemplated eating a squirrel yesterday, I knew I had to pack more snacks to make it without screaming into my coat while sitting in my commute home. So I packed the following:

I did so well. I mean, I felt lighter just walking into the women’s restroom and looking at my reflection in the mirror. Surely I’ve lost a few ounces. Through out the afternoon, when I began to get hungry, I’d pop a carrot in my mouth. I was confident eventually my skin would begin to have an orange haze.

Later, I entered in my points and was extremely happy about the surplus until I remembered I hadn’t logged the Stacey’s Naked Chips. And what else am I going to eat the humus with? Carrots? Ew! Damn it, I was down to 3 points.

Apparently me being on a diet equated to Pizza Hut. I say this because my husband text me about picking up Pizza Hut since our kids were at their grandparents. He had a craving for it for sometime.

“I have this sneaky thing called a diet preventing me from eating pizza,” I responded.

His next move was to say all I need to do is walk around the block a few times and that would equate to being allowed pizza. Because the boys were gone and I didn’t feel like cooking, I picked up pizza. I was good though, I ate just 2 slices and not even the crust of them. To put this in perspective, in high school, I could eat the boys under the table with 6 slices.

After dinner, I did 15 minutes of Insanity until my foot began to cramp painfully. That’s half the reason I don’t work out, my right foot cramps all the time and it’s extremely painful. I’m hoping that with adding an exercise routine to my life, the cramping will go away as my feet become stronger.

Look, I’m not going to beat myself up if in these first days if I don’t follow everything exactly. And trust me, I’m not following everything exactly. That’s something I would have done 5 years ago. I’m easing into this new lifestyle, though somewhat painful. I paid the money to join Weight Watchers and you better believe I’m going to get something out of it.