These F’ing Ants Are Everywhere!

It started last week. I would get an occasional ant on my desk at work. At one point I had a massive spider on my desk in which my new co-worker picked it up by one leg to throw it out. This shocked me, leaving me wonder if she should have her own poorly written reality show on Animal Plant like: 2 Legs Vs. 8….or something.

I’m not afraid of the anorexic spiders, which this spider was. The ones I’m afraid of are the ones that look like the chest hair of a Southern Italian man. I can say this because I’m Italian, so no accusations of racism, ok?

So today I walk in and I have ants every where. Some are crawling on my keyboard, some on the left side, some on the right. It was like I had shown up late for the party and everyone was just doing their own thang’. I decided against the Raid again after using it 2 days ago. It had a pleasant aroma that I was embarrassed to say I enjoyed. Obviously this has been an issue for Raid Inc. in the past as the bottle read in bold writing: DO NOT USE AS AIR FRESHENER. I felt they could give Glade a run for their money if they could solve the whole pesky thing about causing cancer if absorbed through the skin.

These ants had no concern that I was there. It was like I was interrupting their daily commute. My first move was to not only kill them with a tissue but to leave the tissue on my desk, opened up in plain view. The reasoning for exposing all of their dead carcasses was so that they could see their fallen brethren, think twice about passage and go home. Kind of like movies you see, set in the dark ages where everyone is impaled or there is a line of heads  staked out front of a castle so if an army is considering invasion, they’ll think twice. These little ass holes could give 2 shits about their fallen comrades. 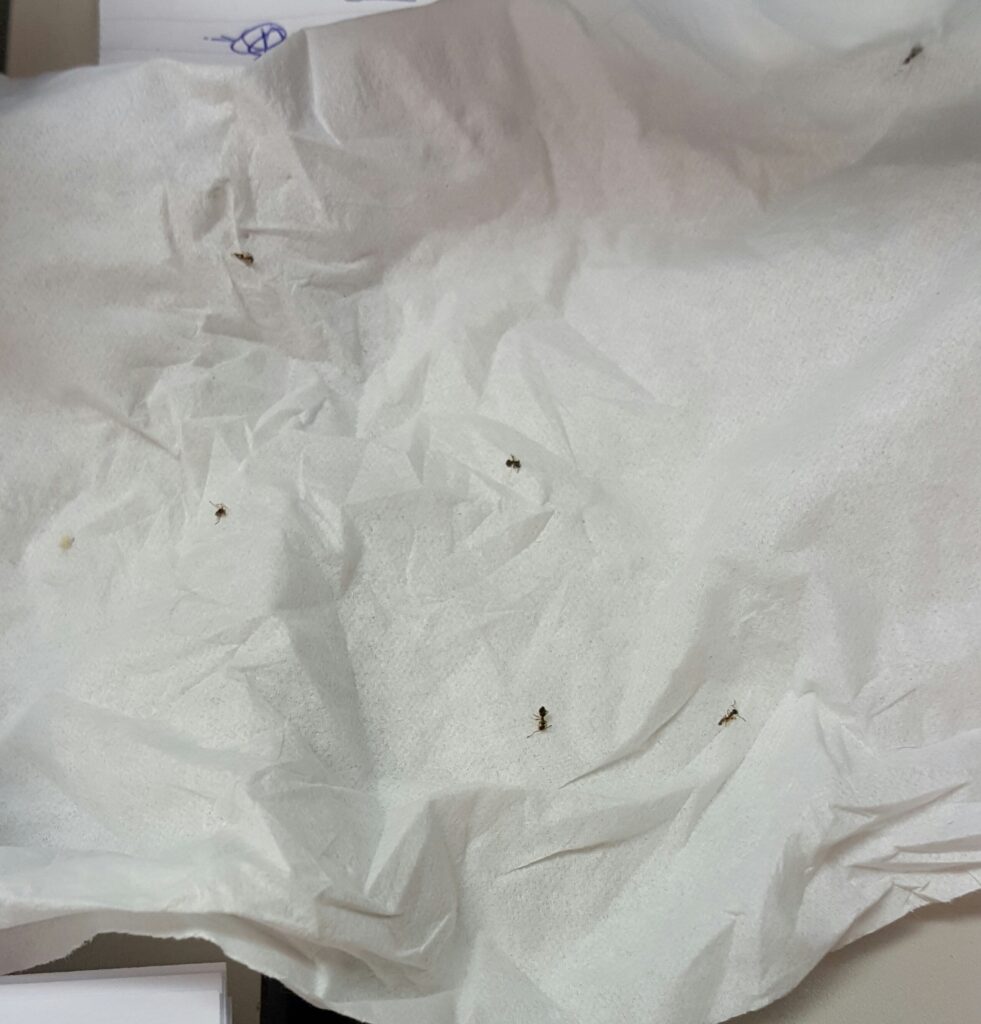 After snapping this picture of the 3rd tissue I had used to kill them, I quickly snapped this picture when no one was looking (because I would look like a crazy person) and decided to throw out my tissue. I’ve notified HR and I hope someone will be spraying soon and I hope it smells as good as the Raid stuff, just doesn’t make me nauseous after eating like Raid did.

Hey, and if you guys have any natural remedies, I am all ears!