My Application for Adopting a Dog Was Rejected! 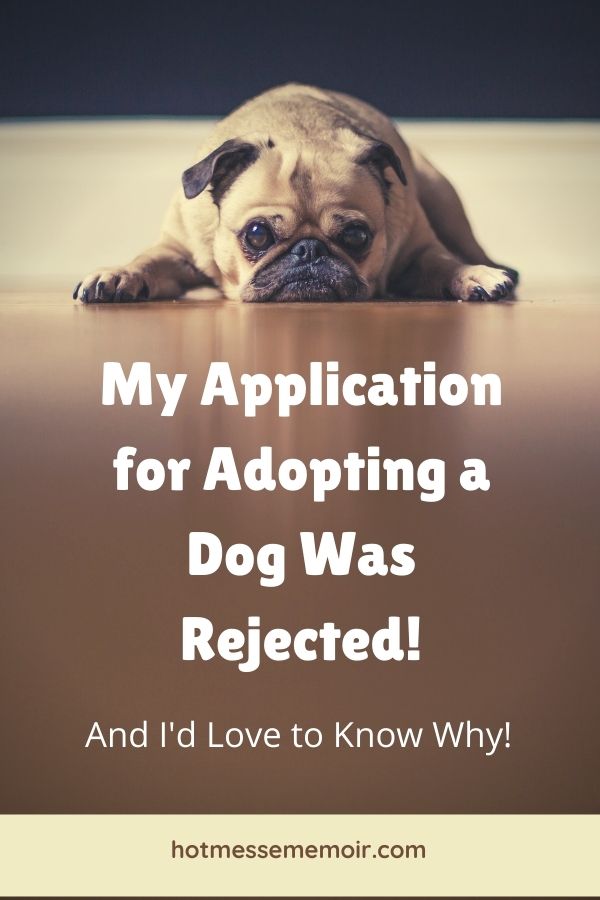 Not gonna lie folks, I’m getting the itch to get a dog. I’ve had the itch for a few months now. In fact, over the Spring, we watched my cousin’s dog Duchess for about 6 weeks. If Stepford had Stepford dogs, Duchess would be it. Loving, smart, no barking (except at rabbits), zero accidents and doesn’t beg for food. We occasionally questioned if she was actually a really, really good robot.

I love Petfinder because it allows me to search by age, breed, if the dog is housebroken and proximity. There are several pictures of most dogs and some even have videos. What I love most is the honesty in each of the bios of the dogs. Unlike going to a pound and knowing nothing about the dog, dogs that are in foster care have history and those foster homes write about it. Anywhere from a dog in need of a $5,000 medical procedure to separation issues have been disclosed and I love it.

What I Don’t Love About  Dog Bios

What I don’t love about the bios are some of the ridiculous demands. While some are valid, I’m sure some aren’t. Some of these demands have included:

Someone needs to be home all the time

Needs to have a home with another dog

Again, I see the validity in some of these and some I don’t. It’s 2020 and last time I checked, a good chunk of folks are working outside the home. And what if you live in an apartment that has a fabulous dog park just a few yards away? 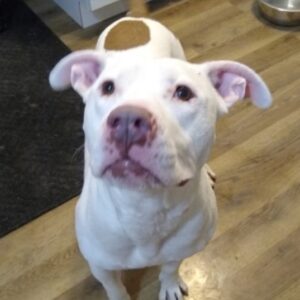 Meet Henry. I would like to adopt Henry. He’s a pit bull terrier and I’ve done all my research on pit bull terriers and have concluded, they aren’t the monsters that society has made them out to be. Like humans, there are some real ass holes and there are some sweet ones. Henry’s bio sounded absolutely perfect! He loves to cuddle, play, knows commands and is housebroken.

I sent an email to the rescue and asked if we could just meet Henry. Promptly, I received a response back stating I had to fill out the application just to meet him. I pondered it for a few days and after a few glasses of wine, said screw it and filled out the entire thing.

You would have thought I was applying to run the nursery of a hospital. They asked things like all the ages of everyone in the home, if we have future life-changing events coming up, if we have a fence and how long the dog would be alone. There were “what if” scenarios such as “how would you handle if you found out one of your children were harming the dog?” In all honesty, I said I would separate the dog and child asap, ground the child for life and if something deeper was going on, seek professional help. I had to provide the name and number of former vet(s) as well as one reference.

I submitted the application the evening of the 29th. Less than 24 hours later, I received a form rejection letter with 8 bullet points and how we could have been rejected for one or several of them but did not specify which ones. I emailed them back and asked specifically why we were rejected. No response. I wait almost 24 hours and follow up with the question. No response. Now it’s personal. I googled this shelter and found that many folks have been instantly denied or had negative run-ins with them. Look, I can take the rejection but all I ask in return is feedback.

Guardians of the Doggies

Why is feedback so difficult for these people? Are they arrogant enough to think they don’t need to give me a reason? I fully acknowledge they don’t but it’s called common courtesy/being a decent human being.

I also went back on their Facebook feed where they also post the dogs for adoption. Henry has been looking for a home for over 2 months! And they reject me without even a phone call or meeting. Folks, it’s not like I wrote answers like:

This dog will be tied to a tree for multiple hours a day.

I would give this dog away if he pissed on our floor.

If Henry needs to be boarded, he’ll go to the Pet Suites in Gahanna.

There is really no reason to give up a dog.

In the meantime, Carter and I visited the animal shelter my sister volunteers at and got to play with 2 of the most adorable puppies. If you can ignore the epileptic seizure I’m having while watching the 2 puppies, enjoy a bit of cuteness on me. The goal was for these 2 to both have the alligator in their mouths at the same time and run. Enjoy!

Share the laughs with friends!
adopting a petdog rescuedogsfunnyhumorpuppiesrescue dog