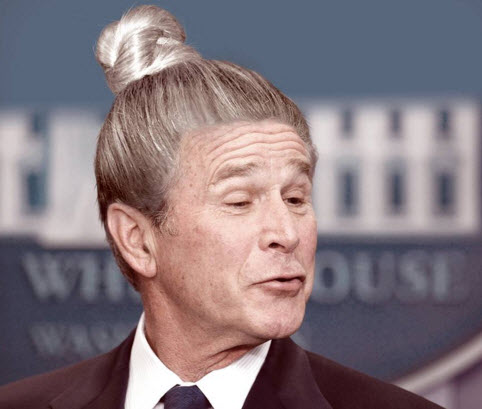 Ok, we need to have a serious discussion about man buns. The bun in general is usually awful to begin with but then put it on a burly man and suddenly my eyes are bleeding. And for any man out there reading this, cusping his bun and questioning this decision…take it out. You heard me…grab your purple GOODY elastic and throw it away NOW! If you don’t then throw your manhood instead. Purple elastic or manhood….those are your 2 options. I trust you’ll do the right thing.

So where is this contempt for a harmless hairstyle coming from? I’ll tell you where. Against my will I was forced to watch Gotham with my husband and kids. As a team player I didn’t want to be the ass hole and not participate in this riveting drama Monday night.

Apparently the main character goes to prison. In the common area or whatever you call it, there is a fight about to break out. I took it about as serious as a fight in the school yard of a Barney episode. The bitches of Orange is the New Black scared me more than these classically trained, well coiffed actors attempting to be inmates. Then in the background I saw it. One of the inmate extras was wearing a man bun with his perfectly pressed grey prison shirt and his perfectly pressed pant.

I don’t think so buddy. This isn’t how it’s works. I’ve never been to prison but I’m guessing the odds are NOT in your favor of not being ass raped should you show up on your first day with a man bun. Why? Because men don’t wear buns!

“No, no! That is not how it works!” I proclaimed. “Prisoners don’t wear buns.”

My sons looked at me like I had 2 heads and honestly I really didn’t care. I was pissed at this innacurate portrayal of our penal system and the wearing of a man bun. Should I see any more prison man buns I’ll be forced to call it the vaginal system in lieu of the penal system as that seems to be where it’s heading.

Ok, I’m done sounding like a crotchety old woman. I’m off to watch Empire and I swear to God I am going to loose my shit if I see a man bun in tonight’s episode.