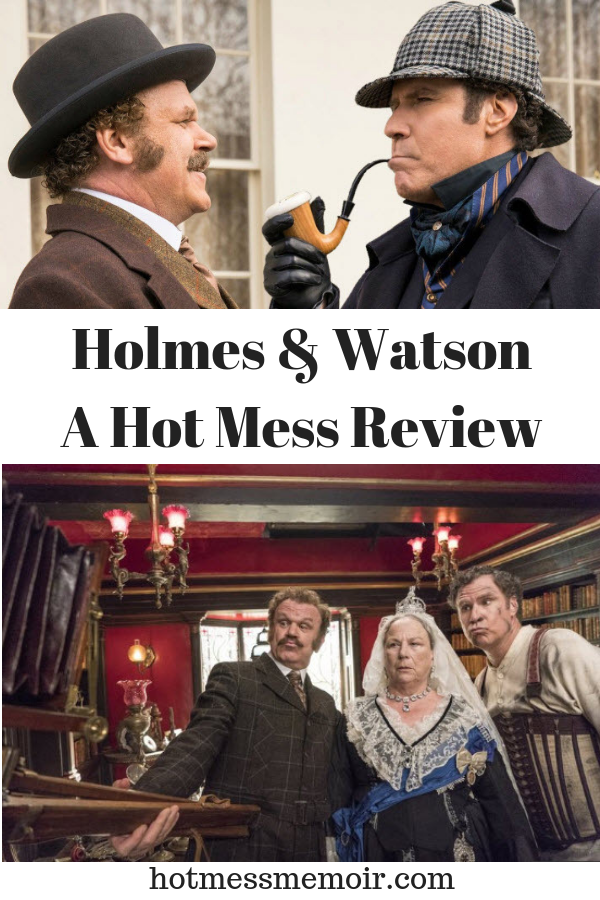 For my birthday, I asked that as a family, we go to the theater to see Holmes and Watson. I have been dying to see this movie for months now as I absolutely love the chemistry between Will Ferrell and John C. Reilly. Stepbrothers is my all-time favorite movie. I also had a birthday coupon for a free soda and let’s be real, that was probably worth $50. Am I right?

After what seemed to be an hours worth of previews, the movie opened up with a well articulated quote that surely came from an academic genius or captain of industry. The punchline came though when the author was revealed:

This obviously made my family and I chuckle and we were off to a good start.

The movie is set around the year 1907, London, England. Sherlock Holmes (Will Ferrell) has dedicated his life to solving crimes while vowing never to feel emotion again, thanks to a broken heart at an early age. His trusty sidekick, Watson (John C. Reilly) is there to support Holmes while keeping him in check. After failing to capture England’s most wanted criminal, Holmes is tasked with saving the queen of England. Holmes & Watson has 4 days to find and capture whoever is threatening to kill the queen.

To me, the comparisons of 2018 versus 1907 were hilarious. My favorite scene is when Holmes and Watson are completely wasted and find themselves in a telegraph office in the middle of the night. Watson is sending a drunk telegraph to a love interest, obviously the equivalent of a drunk text. Not to spoil it but he also attempts to send a dick pic via telegraph.

We’ve all seen the selfie trailer so we’ll skip that.

I love how the movie acknowledges how bad medicine really was in that era. For example, the woman doctor (which Holmes & Watson find a complete oddity) touts her survival rate of treating “hysterical” wives with electroshock therapy at 1 full week!

While in a gym, they have an area that is reserved for lung exercise. In reality, it’s just a bunch of people smoking. In the same gym, they have the equivalent of a spin class happening with several patrons on bikes that are 6′ high being ran by a gentleman with a handlebar mustache.

One little nugget performance is by Lauren Lapkus who plays Millie, the female doctor’s assistant who was raised by feral cats and with the help of electroshock therapy, has reached the mental capacity of a 4-year-old. Her behavior is barbaric, child-like and hilarious.

There were a few things I didn’t like including the 1 musical number. It was contrived and did not fit in the movie at all. Had this been a musical then fine, but it wasn’t. It was out of left field. Now full disclosure, I hate musicals anyway so I completely cringed when Will Ferrell began to sing.

In the movie, Will Ferrell has a brother. It would have been genius to keep the brother the same douche bag brother as in Stepbrothers- Adam Scott. Instead, his older brother was played by Hugh Laurie. Nothing against Hugh, just thought it would have been funny with Adam.

And lastly, it was clear they were making a negative reference to our existing president. I am a firm believer of keeping opinions, politics, etc. out of comedy as comedy is what can bring us all together, regardless of beliefs.

Look, Rotten Tomatoes gave this movie a rating of 9%. IMDB, like a 3.5. My friend’s text implored me not to see it. I personally liked the movie.

It’s been a long time since I’ve seen a movie that’s made me laugh…hard. Sometimes, we need brain junk food and this was my brain junk food. Sometimes, I have the mindset of a 13-year-old boy and find the funny in farts (a movie patron actually farted during the movie and announced “excuse me”) is how I laugh. Will Ferrell and John C. Reilly make me laugh. I’ll be real, it looks like there may be a sequel and I’ll be the first to see it. I haven’t been to the theater in a year and it took this movie to bring me to the theaters again, so you do the math. You guys know my sense of humor and I thought it was fuckin’ hilarious.