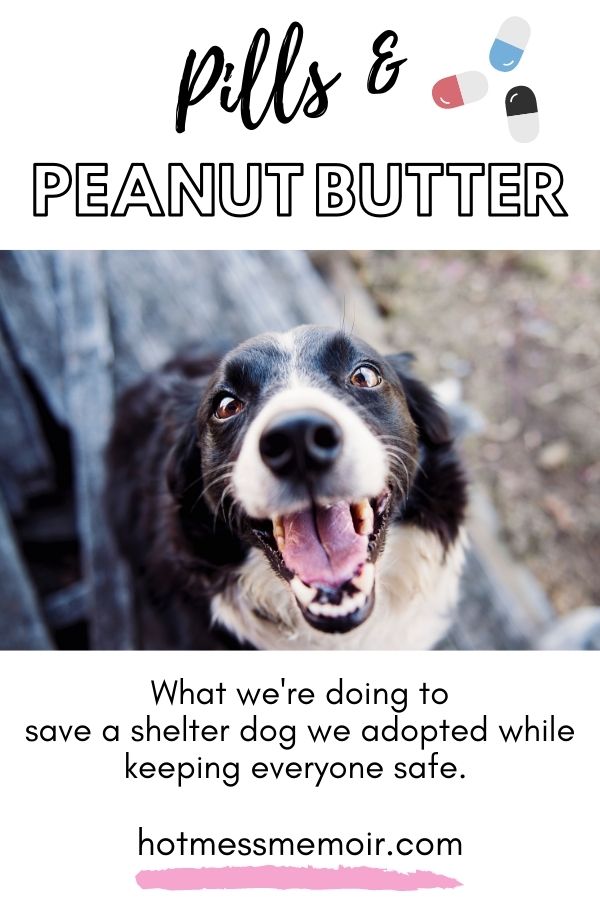 So I wrote about getting a dog and how thrilled we are. Her name is Maisel and she is one of the smartest, sweetest dogs I’ve ever met. But we have a problem, a huge problem. She loves humans but wants to throat punch other dogs.

I named this post Pills and Peanut Butter because it’s one of her favorite times of day. This is when I slip her anti-anxiety meds into a big dollop of peanut butter. I thought about putting my pills in peanut butter but then I remembered the calorie content of one tablespoon and decided against it. The meds are just one of the many ways we are attempting to curb her dog to dog aggression.

When we adopted Maisel, we were told she wasn’t “good with other dogs.” Now, when I hear that, I simply think she’s the canine version of humans that lock themselves into their basement to play 8 hours of video games. Or maybe she’s the dog version of humans that don’t have that “off” button when it’s time to stop talking, continuing to tell their unbearably long story. What the shelter should have said if they were being completely transparent was that if you allow her to be in the presence of another dog, she will kill that dog. But I understand statements like that don’t really get dogs adopted.

At the age of just 13 months, it’s as if whoever had her before, put her through an I WANT TO KILL DOGS boot camp for most of her life. For anyone that’s seen Hunger Games, allow me this comparison. You know the second to last installment where the Capital has brainwashed Peeta into having one goal and that’s to kill Katniss? Just the mere sight of Katniss throws him into convulsions, wanting to kill her. That’s Maisel but with other dogs.

So about 3 weeks ago, I took Maisel to a nearby dog park. They have a separate area so with some luck, that area would be empty and she could run, prance or whatever the hell a dog does when given an entire yard. To my delight it was empty so I let her loose. There were maybe 15 dogs in the common dog area. Maisel found 2 dogs that would run back and forth, along the chainlink fence and she would follow, having the time of her life. She was having so much fun that an old man offered to bring his dog into our area to see how she would do. I was hesitant but said ok. Maisel took one look at the dog in our area and turned back around to continue her run with the dogs on the other side of the fence.

“Why don’t you bring her over here?” An older woman yelled over.

“Well, you’ll never know unless you try,” she argued sweetly.

She did have a point. How would Maisel ever get to the point of playing with other dogs? I had this vision of her being this playful, social little doggie who upon me uttering dog park, would excitedly wag her tail, anxious to hop in the car.

“Ok, I guess we can try it,” I said sheepishly.

Another dog park attendee slowly opened up the first gate we were in while another opened the second door. Maisel didn’t hesitate to prance out of the first gate and run into the second one. As dogs surrounded her as if to greet her, a panicky yelp was heard. It only took seconds to realized she had gone straight for the neck of one of the little dogs.

I shakily grabbed my training tool that emits a sonic sound only dogs can hear. Normally this stops Maisel in her tracks; today it didn’t. Other dog part goers grabbed their dogs away and kept their distance. A man around the age of 60, picked Maisel up, one hand had her fur, the other hand by her collar. Maisel dangled in the air still latched on to the dog’s throat. 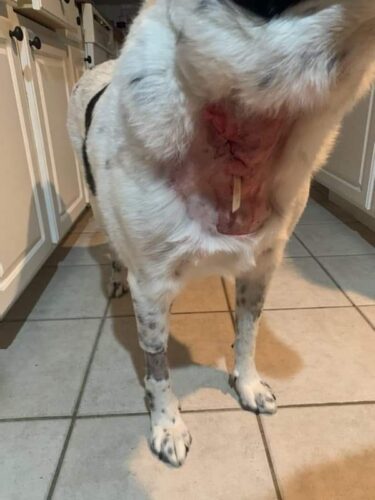 The awful damage my dog caused

I don’t remember how he got her off the dog but she did. Now dummy me thought Maisel and I would just go back to the empty side and continue frolicking in the sunlight. Instead, another patron handed me her leash, the man that had picked Maisel up handed me her and another shut the gate on us. Understandably, we were no longer welcomed.

After inventing new curse words while driving Maisel home, I decided to go back to the dog park to see if the dog was ok and to apologize. Most of the same people had left but the man that saved the dog was still there. I apologized and thanked him profusely.I asked how the dog was and he said her collar probably saved her. There had been a little blood but fo the most part was fine.

Approximately 3 days after the first attack, I took Maisel out to go potty. I saw a woman across the street walking her 2 dogs and had her 2 small daughters with her. Knowing this would set Maisel off, I did the responsible thing and took her to the side of the house. Unfortunately, we weren’t done in time and the lady, dogs and daughters came into view. Her dogs started freaking out upon seeing Maisel and Maisel did too. Before I knew it, I was on the ground. Maisel had lunged so strongly that she had pulled me down. I lost the leash in the process and all I saw was Maisel running to the other dog.

Maisel latched on to the dog’s neck as if she was dangling over a 100′ drop and to let go meant certain death. I’d never seen anything like it. By now our neighbor Larry came out to help.

“Kick her head!” I screamed to Larry as I smacked her butt. Larry began kicking her head and yet she refused to let go of the dog’s neck.

Another neighbor ran out to see what all the commotion was. He too attempted to pull Maisel from the dog. The little girls stood in absolute horror watching as their beloved doggy was being murdered. To say I felt terrible was an understatement.

I don’t know how we got her off of the dog but we did. I pulled her into the house, blood dripping, leaving a trail in our wake. After getting Kujo in, I ran back to the woman. She had shit all over her as the dog had just gone #2 before Maisel attacked her. She sat there breathless and I honestly didn’t know what to say. Hallmark doesn’t have a card for when your dog brutally attacks another dog.

“She got her pretty bad,” she said as she pulled away the fur to reveal the bite. It honestly didn’t look bad at first. I would learn later how bad it really was.

“I’m not going to press charges,” the lady said. That hadn’t even occurred to me but I was grateful she said that, even if that was a thing.

“I’ll pay for all vet bills. Just let me know,” I said, as if I suddenly had won the lottery. 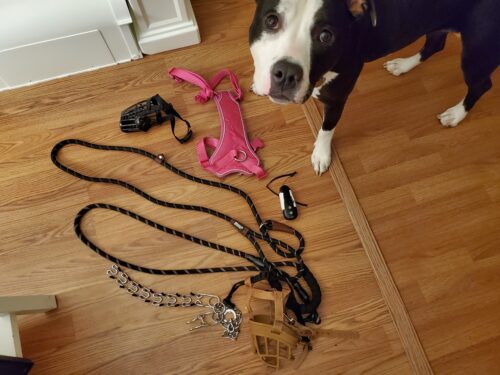 A trip to the S&M store? Nope, things we’ve bought for Kujo.

To say I’m doing everything I can to “fix” Maisel is an understatement. Upon learning of the attack, the vet has increased her anti-anxiety medication. She has an appointment with an OSU Behaviorist on the 5th. She spent an entire week with a trainer (for free because the trainer is kind). I’ve purchased 2 muzzles because the first one was too small. Before the muzzle and the training collar (the awful ones with the prongs), I walked her with 2 leashes, one connected to a harness and wrapped around my waist, the other an English lead. Now when I take her out with the muzzle and the training collar, I wrap the leash around my hand several times, prepared for my hand to be broken if that means keeping everyone safe.

I’m on nightmare #2, thanks to the dog attacks. My nightmares aren’t really of an attack so much as they’re of me walking Maisel. In my nightmares I’m feeling absolute anxiety, so scared another dog is going to cross paths or she’ll somehow get loose. I think in one of the nightmares we did cross paths with another dog.

Maisel is a good dog. She’s only 13 months old and I’m doing everything to fix her because it’s not her fault that some complete ass hole didn’t socialize her. Or maybe they used her in some horrible way. She’s been with us since August and she was in the shelter since June. Born in September, that left 9 months for her to have been treated poorly or unsocialized.

I really don’t know how to end this post other than, there you go. It hasn’t been a cake ride but I’m not a quitter. If any of you have any tips, ideas or the number to a veterinarian specializing in canine lobotomies, please send it my way. 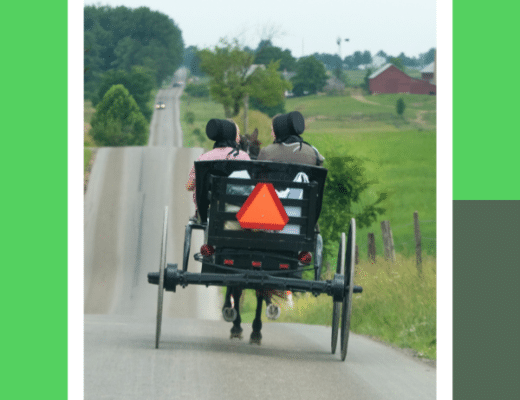 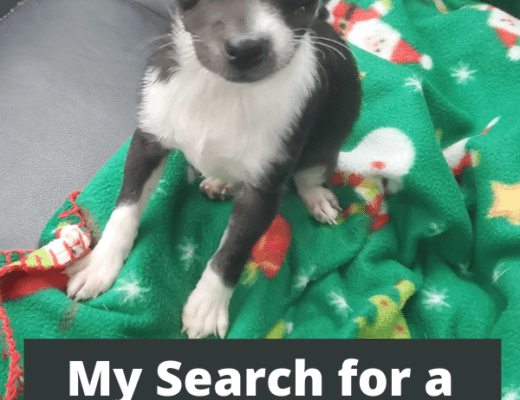 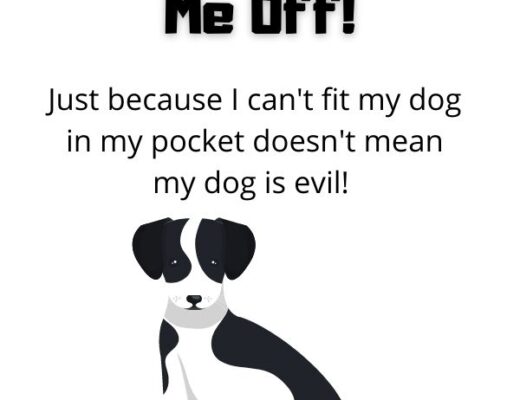 Karen is Pissing Me Off!