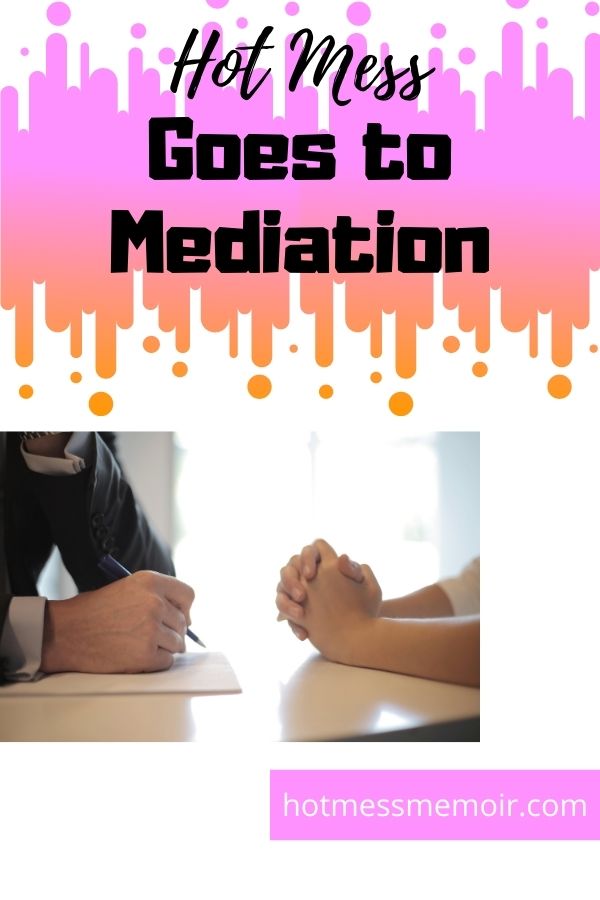 Let’s just say that I do not have a great relationship with our homeowner’s association. We’ve lived in the same neighborhood for over 17 years yet up until only last year did they begin to enforce the pettiest of rules. Rules like your house number needs to be on both sides of the mailbox or that my trash can must be in my garage or behind a partition. And yet rented homes go into complete disrepair for weeks and Uncle Eddy is allowed to park his RV in the street when visiting relatives.

So one lovely August morning, we get a letter in the mail that we get to go to mediation with the HOA. Fantastic! It was scheduled for September 3rd. On September 3rd (and by dumb luck) I go online only to find the mediation has been moved to September 23rd. Had I not checked that morning, I would have made a 35-minute drive for no reason at all to the county seat.

To prepare for our mediation, I put on my lawyer cap that doesn’t exist and began to Google things like “Does the HOA have the right to ___________”. I even consulted with a lawyer over the phone which I highly recommend as I was going to do about three things he said absolutely not to do.

On the day of the mediation, I was ready to Johnnie Cochran my way out of all accused offenses. I wore my little black dress reserved for business meetings, weddings and funerals and promised myself to go in there like a cold, rigid bitch. My husband on the other hand dressed as if we were having brunch at the country club we didn’t belong to. I honestly didn’t know what to expect or how we were supposed to dress so I didn’t mind what he wore. I just knew that jean shorts and t-shirts would be frowned upon.

We got there early and went up to the 4th floor where mediations were held. A middle-aged woman sat in the hall reviewing a yellow tablet of paper probably full of notes. Though she had brunette hair, her roots told the story of avoiding the salon during the pandemic. She wore smart glasses, a blazer and pearls that matched the pearls I decided to wear.

“That’s the lawyer,” I leaned over and told my husband.

“How do you know?” He asked before he caught himself in mid-sentence. He knew better and he knew that I research all people I’m going to meet. I feel it’s important to gain a sense of who you’ll be dealing with, especially when the meeting isn’t amicable.

After passing the lawyer, we decided we both need to go to the restroom. Upon returning to the hallway, the brunette lady asked,

“Are you here for the HOA hearing?”

Curtly, I nodded my head. I didn’t want to give anything up. My husband on the other hand was like a child who had just found his mother after being lost for 10 minutes.

“We are. Are you the HOA lawyer?” My husband asked.

“Ok. Well just so you know, we absolutely don’t know what we’re doing,” he responded with a chuckle.

Come again? Did he really just tell the lawyer of the plaintiff that we have absolutely no idea what we’re doing? Why don’t we just bend over now and wave the white flag? I texted him the following: 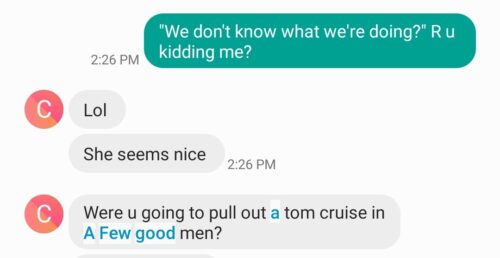 He had a point about the Few Good Men comment but I wasn’t going to give up so quickly. Just then, a gentleman walked out of the elevator and into the waiting area. He made pleasantries with the lawyer then paused for a few seconds before walking over to us.

“A moment?” He asked seriously. We nodded and followed him to just 3′ away from our original position. This put just 6′ between us and the lawyer. The man looked at us over his glasses conspiratorially and quietly said,

“I say we get a petition together, get a couple hundred signatures and oust the HOA. You in? I’m tired of this bullshit.”

He did realize that the lawyer was sitting right there and could hear every single thing we said, right? This might have been a viable plan of attack 3 months ago but here and now, we were at a mediation.

“Sounds like a great plan,” I said knowing we’d never see this guy again. With that, he nodded, patted my husband on the shoulder and moved back to allow us space. Minutes later, a bubbly, middle-aged woman stuck her head out a door and asked if we were ready.

We followed bubbles into the room along with the lawyer. The president of the HOA still wasn’t there despite it being go-time. The lawyer apologized on behalf of her client, texting him again, blaming it on him probably being lost. I grinned smugly at my husband, thinking that this guy’s tardiness would work in our favor.

Two minutes later, the “plaintiff” walked in, dressed as if his next stop was the local honkey-tonk. He was just one Busch beer in a can-cozy away from this, I was certain. His “suit” consisted of brown shoes, jeans and a green t-shirt. I looked at him, then back to the smartly dressed lawyer and then to my husband. This was going to be so easy.