Hot Mess and the School Food 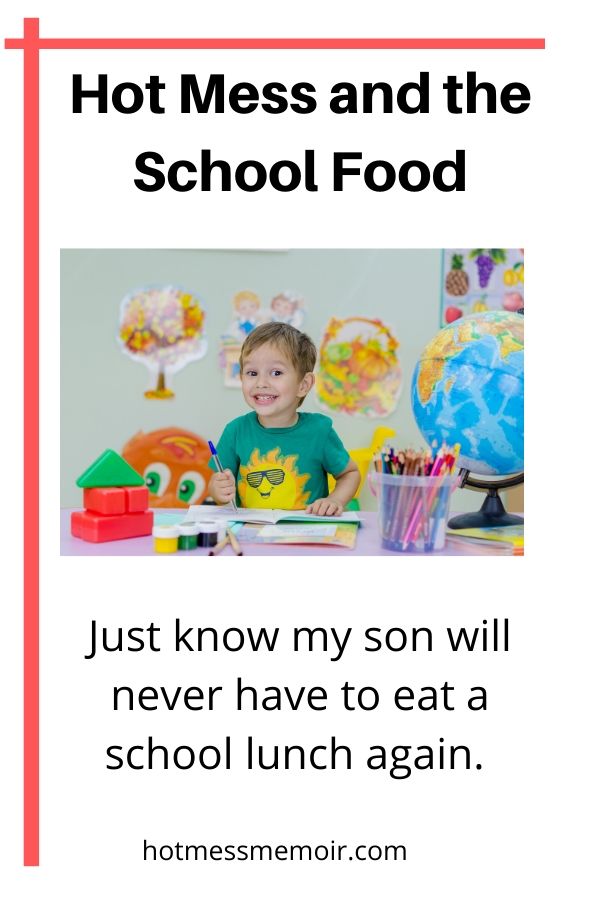 Rarely am I able to make it to school functions because the school thinks we’re all trust-fund babies and don’t need to work for a living. Because we’re so independently wealthy, the school system thinks we can take off between the hours of 1:30 and 2:30 to help with a party. Perhaps between trips on the private jet, we can volunteer in the library from 10 a.m. to noon.

So when an informational sheet came home for having breakfast with our student, lovingly called “breakfast with a buddy”, I was there. And I was “so there” when they mentioned each person would get 3 pieces of bacon….for free. Umm, yes please.

“Do you have any vegetarian friends?” I asked Carter. I leaned in conspiratorially, “because we can sit by them and offer to take the bacon off their plates.” In my mind, this was a rock-solid plan and rather practical.

“Sorry mom, everyone loves meat at my school,” Carter responded. I guess a girl can try.

In theory, the menu sounded delicious: French toast sticks, scrambled eggs, 3 pieces of bacon, orange juice and coffee. See, I went into this with way too many expectations. I don’t know why I had it in my head that this would be catered, perhaps by hotels similar to the Soho Grand in Manhattan. I envisioned thick, hot pieces of French toast, glistening with flakes of powdered sugar and topped with fresh rasberry or blue berry.

Instead, what was going to happen all along, happened. It was two over-worked volunteers in hair nets placing scoops of scrambled eggs, bacon and “French toast” on our plates. I put French toast in quotation marks and you’ll know why in second.

The best way to describe the eggs is fake. You know how you’ll watch an advertisement for a restaurant and the food looks simply scrumptious? Whatever they are showing on t.v., there is steam coming off the food and everything is just the right color? It’s as if the food artists sold the fake eggs to my son’s school and that’s what was offered. It’s as if someone took each chunk of egg and wrapped it in a thin plastic wrap. I’d never had eggs of this consistency.

The “French” toast was worse. We sat our plates down and I let Carter know I was going to find the syrup. Like French fries needing ketchup, you simply can’t have French toast sticks without syrup. It would be like a peanut butter and jelly sandwich, without the jelly. I walked back to the serving line.

“Excuse me ma’am,” I asked one of the hair-netted women. “Where’s the syrup? I need some for my French toast.”

“Oh, they’re already sweetened with the syrup,” she said. I looked at her for a second too long, as if she had just told me she loved me. The “French” toast was indeed not sweetened people. Perhaps on an institutional, Orange is the New Black level, then sure. But not in an “I’m going to put this in my body” sense, sweetened.

I want to know how much money this saved the school system to buy these “sweetened” breads (because that’s all they were). Like, was it a half a penny? I could go out on a limb here and donate bottles of syrup and probably only rack up a bill of $20. Who is the cheap-ass, penny-pinching, scrooge that went to this sort of length to save a buck (or a penny) and forgo syrup? This is worst then sporks!

Seeing that I work for a food distribution company and my co-workers are food buyers, I figured they’d get a kick out of this. I unfolded my 10 fold tissue that was supposed to pass as a napkin and began to load the “French” toast into it.

Carter looked down. “What are you doing? Your taking these to your friends, aren’t you?”

“Yes baby I am. They’ll get a kick out of what is deemed French toast here. But you have my word on something.”

“I will never ask you to buy your lunch again. I get it now. I’ll gladly make your lunch every single day!”