What Was the Worst Insult You’ve Ever Been Given? 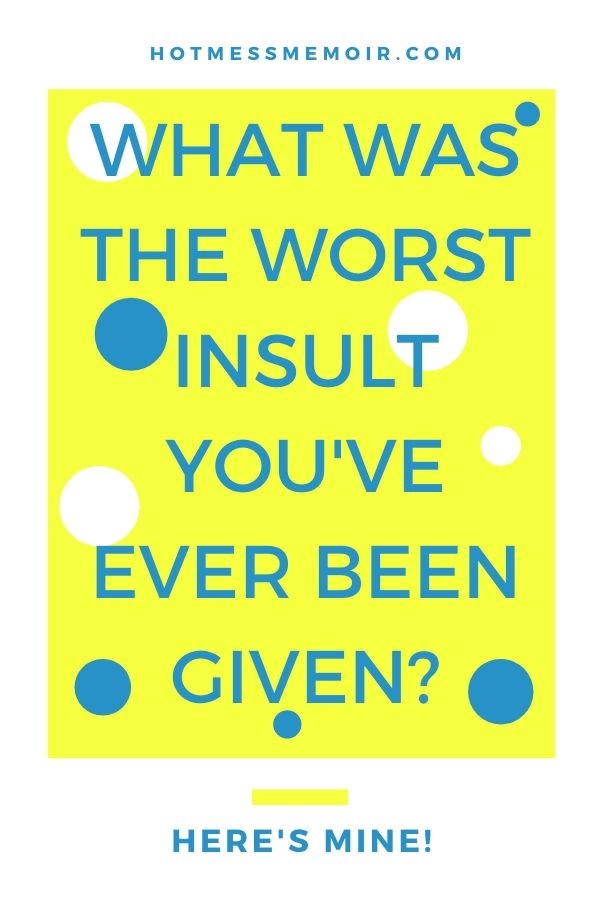 Because I’m annoyed right now, this is going to be a particularly angry post. I’m writing angry but then again, sometimes my most favorite posts are when I’m feeling mean and nasty. I’m waiting on several things right now and I don’t like waiting. All the things I’m waiting on should have arrived here by now or been credited to me and haven’t. Couple this with my period about to start and I’m a raging lunatic.

For Christmas, my sister bought me the most wonderful book on Earth, 400 Writing Prompts*. I intend to use it throughout the year and perhaps beyond for ideas. The first prompt:

What Was the Worst Insult You’ve Ever Been Given

I was asked point-blank when I was due. As in pregnant. As in with Child or bun in the oven. I had just had a baby a month prior and my stomach was taking it’s sweet-ass time to go back down. It may have something to do with eating as if I were still pregnant but we won’t discuss that.

Anywho, we were visiting my husband’s relatives in Western Pennsylvania. One day, we decided to go to their “mall”. For anyone that has never been to a small-town mall, let me explain the standard mix of stores:

On that day, we decided to purchase running shoes for our newborn that hadn’t even developed the skill to roll over onto his back. There was a twenty-something kid working that offered assistance. He had that “golly, gee shucks” about him. He was innocent and stupid.

As he opened the shoebox and took the crinkled tissue paper out of the little baby Nikes, he began to make small talk. He asked how old our newborn was and what sport he would be using the shoes for.

“Sleeping,” I responded, without missing a beat.

The kid hit his head after realizing what a dumb question it had been. He then proceeded to ask an even dumber question:

I had a choice now. I could either tell the truth and make this kid feel bad (in which he totally deserved) or I could lie and play along. Pay no attention that I had clearly stated that the baby in my husband’s arms was our newborn. That medically, it wasn’t possible to birth one child but keep a second one in the chamber till he/she was good and ready to come out. Like, the one casserole was ready but the other one needed 10 more minutes in the oven. Clearly someone missed sex-ed that day.

“I’m not pregnant.” I decided to tell him. But this kid was too stupid to feel bad about the question. Making that mistake to him was on par with when someone mistakes one of your kid’s friends as your child. This kid had not been taught the 2 things you NEVER ask a woman:

Like, a woman would have to be in the delivery room and feet in the stirrups before I ask when she is due.

And the Insult Happened Again!

I won’t bore you with the details but not long after that, I was asked AGAIN by another young man. I was a broken woman by then and didn’t have it in me to tell the truth so I responded,

This answer seemed acceptable and we both moved on. The next day, I signed up for Weight Watchers to lose the belly. So that was the most insulted I’ve ever been. Now if you’ll excuse me, I’m going to check the Fed Ex site AGAIN as well as check my email AGAIN for everything I’m waiting on. It’s honestly like watching water boil.

*This post includes an affiliate link which means if you click on it and purchase something, I may earn a commission.