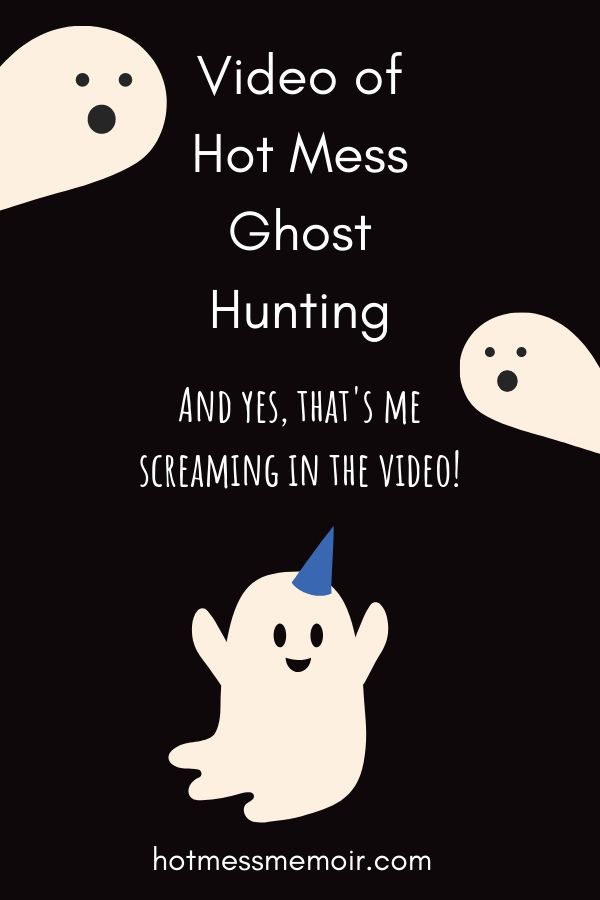 Well folks, I did it. I went ghost hunting and came out of it not an emotional wreck or possessed. Basically, I was alerted a few weeks ago that the restaurant my father owned and operated for over 25 years was not only haunted, but they had reason to believe it was my father. You can read about it here. The ghost hunt happened this past Saturday night and up until maybe 7 PM, I was totally chill. Then my friend text me the following advice:

“Make sure tonight you take something with you to ground you. Like a Christian cross or necklace or something. There could be benevolent spirtis also there that could try to latch on to you.”

I lost my shit. I began to text everyone I knew, to come with me. Mysteriously, they all had plans or flat out didn’t respond. I then began to Google the following:

How to prepare for a ghost hunt

Things that protect you during a ghost hunt

What to do if a spirit latches on

It was like I was back in high school, it was 6:30 a.m. and I had forgotten to study for a test. I was crash coursing myself in ghost hunting.

I packed a bag of what I thought would be adequate ghost-hunting items.  crucifix There was the crucifix that had been in my father’s coffin, 2 of his favorite t-shirts, matches from the restaurant, a Japanese lucky charm an old Japanese man gave me for absolutely no reason and a charger because I was told spirits can drain the power from your electronics. I also added salt but that’s not in the picture. Something about salt protects you?? At 10:30 p.m., I drove to Newark, Ohio, the town I grew up in. 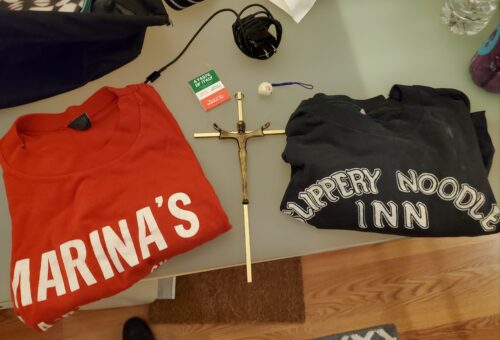 I pulled into the restaurant parking lot and did exactly as the internet told me to do, I said the Lord’s prayer. I was a bit overwhelmed. Not only had I not set foot in the restaurant for over 14-years, but the person that had bought the restaurant after my father’s passing completely trashed it. Now the new owner was in the process of restoring it to its former glory.

Once inside the restaurant and after meeting the owner, I was a nervous wreck and asked for a glass of wine. Very apologetically, he said he didn’t have any. By now my sister and her boyfriend had arrived. I explained I needed to pick up a bottle of wine and asked that they watch my bag but not to look inside because she’ll make fun of me. Upon my return, my sister informed me she had indeed looked inside my bag and I cannot ask her to not look in my bag then leave it with her.

At 11 P.M., 3 ghost hunters arrived stating that the other 3 were on their way. I was getting nervous as several patrons of the restaurant looked extremely comfy and didn’t seem to have plans to leave anytime soon. In fact, my sister struct up a conversation with one of them and I was unsuccessfully willing both of them to stop talking. 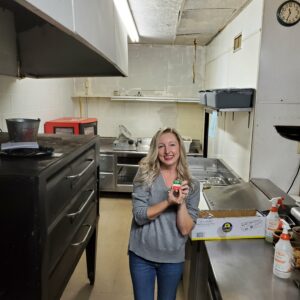 Eventually, the other ghost hunters arrived and everyone cleared out. The ghost hunters got to work, unraveling cords, setting up video cameras and placing sensors in various places. While they prepared, my sister and I toured the restaurant. Though the front of the house was unrecognizable, the kitchen had barely changed. In fact, the clock was still on the wall that had been there for decades. Here’s a picture my sister took of me in the kitchen, holding a packet of the restaurant matches:

Finally, around 1 a.m., we got started. The video opens pretty much where I’m standing in the picture. Now, I didn’t hear anything or see anything from the time we started till 3:30 a.m. when I left. The one thing that I can’t explain is the monitor I have the camera on during the video. I was told it captures the spirits and you can see them moving around.

I’m thinking about doing a follow-up post explaining the seedy history of Newark. Apparently, Newark was nicknamed “Little Chicago” during the prohibition era. This, because of all the bars, brothels and gangs. This would make sense given a few of the spirits in this video. So what do you think?